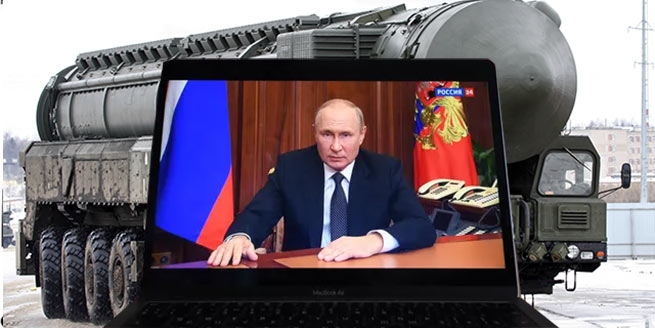 During his September 21 address, Vladimir Putin re-warned NATO of the consequences of intervening in the Ukrainian conflict. The author of an article in the Washington Post tried to “decipher” the Russian leader’s warnings and assess the likelihood of using nuclear weapons.

On September 21, Russian President Vladimir Putin, in his speech on partial mobilization in Russia, issued warnings about nuclear weapons and approved the holding of illegal “referendums” in Russian-occupied Ukrainian regions, the analyst writes. Washington Post James Cameron. How big is the risk of Russia using nuclear weapons in Ukraine? Here’s what you need to know about it.

1. What did Putin say about nuclear weapons?
Putin made two clear warnings in his speech. The first is addressed to NATO. Putin stated without evidence that the NATO leadership is discussing the use of “weapons of mass destruction” against Russia. He recalled that Russia has “more modern weapons than the NATO countries” have. The hint is clear. Moscow can respond to a nuclear strike by the North Atlantic Alliance, which NATO does not threaten it with, inflicting its own nuclear strike.

The second warning is more general. Putin promised that Russia would use “every means at our disposal” to protect its territorial integrity, the Russian people, and the “independence and freedom” of the country. To whom the second warning was addressed is less clear. Probably the audience is not limited to NATO members.

2. Is there anything new in Russia’s nuclear policy in this case?
There is nothing new in the first warning. The 2014 Russian military doctrine and the 2020 Fundamentals of the State Policy of the Russian Federation in the Field of Nuclear Deterrence state that Moscow “reserves the right to use nuclear weapons in response to the use of nuclear weapons against it and (or) its allies and other types of weapons of mass destruction. Putin’s address does not contradict his earlier statements designed to keep NATO from intervening in the event of war.

Now, some analysts argue that Putin’s second warning expanded Russia’s ability to use nuclear weapons first. However, the “Fundamentals of State Policy” already contains a provision that the country’s nuclear forces exist to protect the “sovereignty and territorial integrity of the state.” So it is not clear what Putin’s words are changing here.

But what matters is the context in which Putin’s warnings were made. In the same speech, Putin approved the holding of “referendums” in the coming days in the Russian-occupied areas of Luhansk, Donetsk, Kherson and Zaporozhye regions of Ukraine. Western representatives note that this vote is illegal under Ukrainian and international law, and predict that in the course of a rigged vote, the vast majority of its participants will vote for joining Russia, paving the way for the annexation of these territories by Moscow. Moscow annexed Crimea in 2014 after holding an illegal referendum, saying 97% of its participants voted in favor of joining.

Will Putin’s warnings about protecting Russian territorial integrity extend to the annexed territories? This is an important question. Some Western analysts have previously said that Ukrainian attempts to retake Russian-occupied Crimea would heighten the risk of Russian nuclear threats and even the use of nuclear weapons.

3. What practical options does Putin have with nuclear weapons?
It is highly unlikely that Putin is using Russia’s vast arsenal of strategic nuclear weapons capable of striking the United States. Undoubtedly, he fears provoking an apocalyptic nuclear war. But Putin may bet on threats, combined with the use of short-range and less-yielding operational-tactical nuclear weapons, to overwhelm Ukraine and its Western backers. His goal in this case would be to force them to end the conflict on Russian terms for fear of further escalation.

It is unclear exactly how Russia would use nuclear weapons in such a scenario. Official Russian sources are limited to general political statements. And Russian experts in their materials usually proceed from the fact that Russian troops are able to win in a “local” conflict like the Ukrainian one, so there is no need for nuclear escalation.

But based on their assessments, one can make different assumptions about the ways in which such nuclear weapons will be used. Russia can carry out an underground or air nuclear explosion, for example, at its Arctic test site on Novaya Zemlya. It can deliver a demonstrative strike on an uninhabited area near Ukraine, for example, in the Black Sea. And it can attack Ukraine directly, striking a military facility or even some Ukrainian city. Putin could take these options one at a time, giving Ukraine time to admit defeat and the West to pressure Kyiv to capitulate before further escalation.

4. How will the world react?
Even if such options are included in the Russian plan, the use of nuclear weapons is fraught with enormous risks for Putin and his regime. It is likely that in this case Russia will find itself in an even more difficult military, political and economic situation.
Putin cannot be sure that Ukraine will give in or that the West will withdraw its support for Kyiv. Then he will have two options: further escalation or recognition of the failure of his desperate adventure. Ukraine, the United States and NATO give no reason to believe that they are ready to back down.

Putin will also break the 77-year-old taboo against the use of nuclear weapons. This will horrify the whole world, causing a wave of condemnation and economic isolation, which will be much more serious than anything that Russia is facing today.
And there is also the option of a retaliatory military strike against Russia. Before Putin’s speech, President Biden warned that if Moscow used nuclear weapons, “it would change the nature of war like never since World War II.” He also warned Putin about the US response, noting: “The nature of the response will be determined by what the Russians do.”

It is not very clear what the nature of the military response will be. Independent analysts offer a range of compelling non-nuclear responses, ranging from cyberattacks to conventional strikes against Russian forces to punish the units that carried out the attack, to assisting Ukrainian forces in expelling Russia from Ukraine.

5. Who in Russia decides on the use of nuclear weapons?
Of course, Putin is unlikely to have unlimited powers to use nuclear weapons. The Russian state has three nuclear briefcases held by Putin, Defense Minister Sergei Shoigu and Chief of the General Staff Valery Gerasimov. Analysts say that in order to order the deployment of Russia’s strategic nuclear forces, the permission of two owners of nuclear briefcases is needed.

But it is not clear whether this restrictive rule extends to operational-tactical nuclear weapons, which are of greatest concern today. Analysts argue that while the Russian military does not formally have veto power, it does have some control over the use of such weapons by participating in the planning and execution of strikes. But believing that Russian officers will refuse to obey the order is very risky.