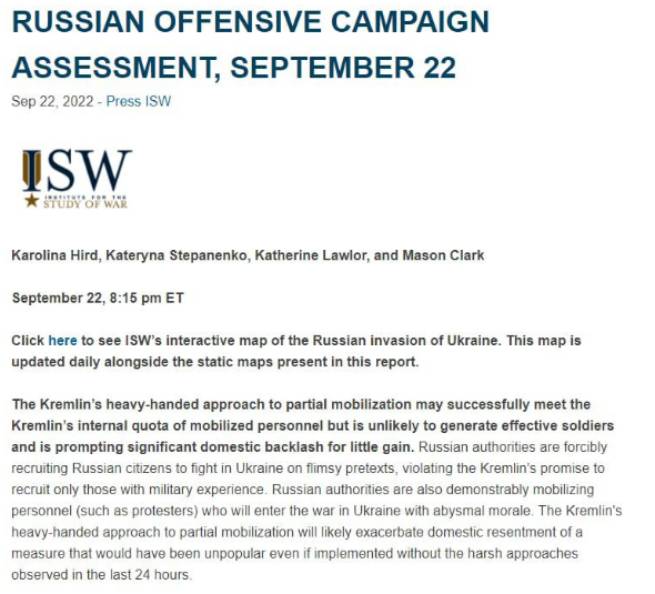 The American Institute for the Study of War ISW explained how the exchange of prisoners between the Russian Federation and Ukraine and the announcement of partial mobilization in Russia are connected.

Experts note that the Kremlin tried to hide the significance, downplay the scale of the exchange of prisoners, announcing on the same day mobilization. In the report ISW (Institute for the Study of War) says:

The Kremlin likely tried to downplay the prisoner exchange with Ukraine, which is deeply unpopular with Russian nationalists and war bloggers, by undertaking the exchange on the same day that Putin announced a partial mobilization.

Institute experts remind that the liberated Ukrainians in the Russian Federation are called “Nazis” because of the numerous supporters of the Nazi theory among the fighters of the “Azov” regiment.

At the same time, the institute for the study of war believes that Russian President Vladimir Putin’s September 21 announcement of “partial mobilization” reflected many of the problems that Russia is facing in its tentative invasion of Ukraine, and which Moscow is unlikely to be able to solve in the coming months.

Putin’s order to mobilize part of the Russian “trained” reserve, that is, those who have completed their mandatory military service, will not create a significant combat advantage for Russia in the coming months. This may be enough to maintain the current level of the Russian armed forces in 2023 by compensating for Russian losses, although this is not obvious.