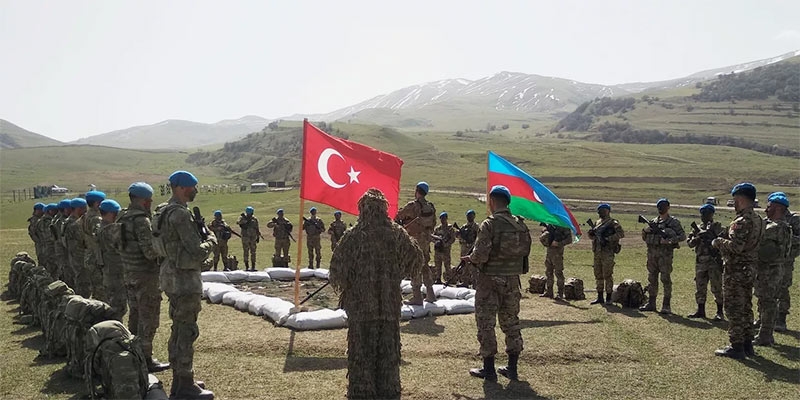 Turkey annually strengthens its position in the South Caucasus and already dominates in the region, political scientist Alexander Zhilin told Iravunk. In many ways, this is the result of Erdogan’s thoughtful policy, but this is not the only thing, the expert believes.

The interlocutor of the Iravunk media holding is a military expert, a retired colonel, a political scientist, president of the Center for the Study of Social Applied Problems Alexander Ivanovich Zhilin.

“Iravunk”: Alexander Ivanovich! How do you see the scenario for the development of Russian-Turkish relations, including in the context of the events in the South Caucasus?

Alexander Zhilin: Turkey continues to dominate this space, strengthening its position every year. Recep Tayyip Erdogan is, frankly, a brilliant politician. He seeks his interests with NATO, and with the United States, and with Russia. Moscow is so “tolerant” towards him that many are wondering: where is her national dignity? A downed plane, a murdered ambassador, a special operation in the zone of Russian interests in Syria, anti-Russian statements on the Crimea and not only. So what? And nothing, the Kremlin wipes itself every time. It builds a nuclear power plant for its hard-earned Turks, provides Turkish gas flow, opened a market for agricultural products even to the detriment of its producers … because if tomorrow Turkey closes the sea routes, our grouping in Syria will be blockaded. You can, of course, blame the Turkish leader, but he behaves towards the Russian Federation exactly as the Kremlin allows.

– In your opinion, what are the reasons for the defeat of Armenia in the Nagorno-Karabakh conflict? Who do you think should be held responsible? Did someone in Russia analyze the results of the war, during which, conditionally, the Russian-style army was defeated by the Turkish army, and the army, conditionally, of the NATO model – the Azerbaijani one?

– I would not raise the question that the Russian army was defeated. Because she did not participate in the military conflict. My point of view is unequivocal: it was not the Armenian people that were defeated. Nikol Pashinyan and his team lost the war. More precisely, they surrendered, merged the interests of Armenia and its people for the sake of their mercantile interests. I know that many Armenian brothers will attack me with criticism and curses. But this is my point of view, and I cannot be hypocritical about the Armenian people, which I respect and love, therefore I speak honestly. It was a betrayal of the country and the people, whose representatives went to death in order to preserve the living space of their children and grandchildren. And they were betrayed by a bunch of politicians for the sake of keeping themselves in power, read – feeders. For whom was it a secret that Turkey would do what it did with the hands of official Baku? Or did Pashinyan not see how quickly Ankara is arming the Azerbaijani army, sending its officers to its ranks, supplying drones, which, by the way, ensured victory? All this was in plain sight, but the political leadership of Armenia did not lift a finger to organize a confrontation. The tragedy of Armenia is that Baku has a powerful ally – Turkey, and Yerevan does not have such a serious partner. Making a bet on everyone, Yerevan was left alone. And the calculation of the Armenian elite that Russia, as the leader of the CSTO, together with other countries of this office, will intervene, turned out to be a catastrophic mistake.

– The Azerbaijani military entered the zone of responsibility of the Russian peacekeeping contingent in Nagorno-Karabakh and occupied several important heights in the area of ​​​​the Lachin corridor, violating the conditions of the 6th paragraph of the tripartite Statement on a ceasefire in Nagorno-Karabakh dated November 9, 2020. On the other hand, the Russian side reacts extremely painfully to any criticism of the peacekeepers.

– Yes, you are absolutly right. We went in and took up positions. And in response, silence. Yes that there peacekeepers! You can see how Moscow reacted and what consequences for Ankara followed after the assassination of the ambassador, the destroyed Russian military aircraft and pilot, Turkey’s behavior in the zone of Russian interests in Syria, a completely fresh anti-Russian statement on Crimea … Erdogan did not even get off with tomatoes. Everything got out of hand.

– At one time, Russia actively criticized the international forces led by NATO KFOR (KFOR – “Forces for Kosovo”) for not complying with the points of UN Security Council Resolution No. 1244 in Kosovo and Metohija, where the Serb population was persecuted by bandits from the Kosovo Liberation Army.

– Many by inertia identify today’s Russia with the USSR. That great country does not exist and never will. Can you imagine that the Soviet Olympic team went to the Olympics without a flag, anthem, coat of arms, and the letters of the USSR on the chest of the athletes were covered with black tape under the gunpoint of television cameras of all world news agencies? And the word RUSSIA, sacred to us, was sealed on the sweaters of our athletes. And silent. This is the colossal difference between the past and the present. And you are talking about peacekeepers in Karabakh …

– In the Syunik region, Armenia lost the Black Lake and several military positions towering over the Yerevan-Goris highway, the only transport artery connecting Artsakh with Armenia. And this is the area of ​​responsibility of the CSTO. On the other hand, in the above-mentioned statement there is not a word about a certain “Zangezur corridor”. All interested parties, first of all Iran, have quite clearly expressed themselves on this issue. The initiator of the ceasefire and the statements – Russia.

– In order to make statements that will be taken seriously, and not with ridicule, you need to be a sovereign, economically powerful, technologically advanced country. When China makes statements in its own interests, everyone is already pressing their ears. Because the People’s Republic of China is a force that possesses not only an aggregate economy, but also an idea to which the meaning of life is subordinated. What is the image of victory in Russia? Did someone clearly draw an image of the future? There are no images – ugliness comes. Everywhere and above all – in the minds…
I mean that the Armenian people need to get rid of illusions and rely more on themselves. Moreover, the Armenian diasporas around the world are so rich and politically influential that they are able to protect the interests of small Armenia without Russia and the CSTO. Why they don’t do it is not my question.

– Is the scenario of the NKR joining the Russian Federation realistic? – This should not be decided by Russia in the first place, especially in the current situation. Initiatives for rapprochement should come from the NKR and Armenia itself. We don’t see it. Therefore, part of the Russian people have a feeling of the dependent position of official Yerevan: Russians, come, protect us and go to hell, we ourselves have a mustache …