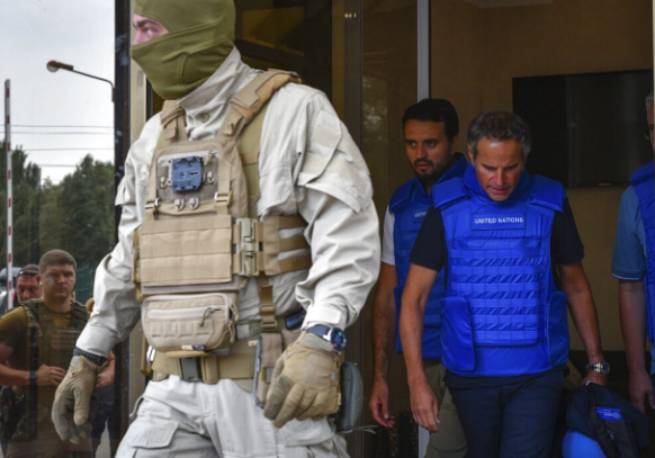 The head of the IAEA, Rafael Grossi, assessed the situation during his stay at the Zaporozhye NPP and left, leaving five members of the mission for further work.

According to BB.LV, the remaining IAEA staff plan to meet with residents of Energodar, the city where the station is located. The initial assessment of the state of the NPP has been made. Grossi stated:

“We see the dedicated work of the staff and management. Despite the very difficult circumstances, they are doing their job professionally. We will continue our analysis. The key things that I wanted to see, I saw.”

According to him, the members of the mission in a few hours managed to collect a lot of important information, and added that the inspection participants will remain in the city and plan to meet with the residents of Energodar. Then the issue of the permanent presence of IAEA observers in the station area will be decided.

Energoatom confirmed that, as of 18:00 yesterday, 5 representatives of the IAEA mission remained at the ZNPP, who are unloading the equipment they brought and will continue to work at the station. They will be at the Zaporozhye NPP until September 3.

Several videos have appeared, the frames show Russian military trucks marked Z. Video materials are published by Russian media. During the inspection of the Zaporozhye NPP, IAEA experts visited the roof of a special building with fuel for reactors, Russian media also report. The experts were shown holes in the roof, pierced, allegedly, by shells from an American-made M777 howitzer.

Russia convenes September 6 meeting of the UN Security Council because of the situation at the Zaporozhye NPP. About this, as he writes “European Truth”, the state news agency TASS reported. The Russian Federation stated that the meeting was necessary “in connection with the shelling of the Zaporozhye nuclear power plant by Kyiv.” According to the official position of Kyiv, the Russian troops are shelling the Zaporozhye nuclear power plant. Russia expects the participation of IAEA Director General Rafael Grossi and UN Secretary General António Guterres in the UN meeting.

Advisor to the Head of the Office of the President of Ukraine Mykhailo Podolyak thinksthe IAEA mission during the two and a half hours that it spent on the territory of the Zaporizhzhya nuclear power plant on September 1 did not manage to see much:

“It looks very strange, in my opinion. The Ukrainian side believes that a mission of this level, and this is primarily an engineering, nuclear physics mission, did not come just to look at the territory of the canteen or certain halls. This mission has specific algorithms for studying what happens to the control mechanism of such a complex infrastructure as a nuclear power plant.Is there a danger to circuit safety – radiation, nuclear – and what is the state of the reactor in general?Therefore, it is surprising that only 2 hours.But the IAEA says that it will leave a certain number of its members on a permanent basis there. We’ll see. But anyway, it seems to me that out of the two and a half hours that the commission was at the station in full force, one could only listen to amazing tales performed by a representative of Rosatom. No more.”

Podolyak added that we still need to wait for the IAEA report, while noting that the Russians “camouflage” their attacks on the station and want to create certain difficulties for the IAEA so that its mission does not feel safe and reacts differently:

“Today they (the Russians) generally used a helicopter attack on the territory of Energodar, and then came up with a story about some kind of landing force, saboteurs, to mask these attacks. Again, this was a program of psychological pressure.”

He noted that during the visit of the IAEA mission there was a certain number of Russian journalists at the Zaporizhzhya NPP, which Russia should not have brought if it was afraid of shelling from Ukraine.