In the terrible days of warm September 1922, the most beautiful, most lively city of the Asia Minor coast of Turkey was burned to the ground. Only the flourishing Greek and Armenian quarters were burning: the fire bypassed the poor quarter where the Turks lived.

For the Greeks, a city with thousands of years of history, the cradle of Greek and European civilization, was on fire. For the Turks, gavour izmir, the city of the infidels, was finally consumed by fire. One and a half million refugees leaving the burning city left behind them in the smoking ruins 300 thousand brutally murdered brothers and 150 thousand hostages, mostly men aged 18-46 years. Among the brutally murdered prominent figures of Smyrna was the metropolitan of the city Chrysostomos Kalafatis, later recognized as a saint for the torments he accepted for his people and faith.

“One of the strongest feelings that I took with me when I left Smyrna,” the US Consul General in Smyrna later wrote, “is the feeling of shame that I belong to the human race.” Exactly the same feeling should have been experienced by hundreds of foreign missionaries who witnessed the massacre of the Christian population and the destruction of perhaps the most significant layer of world history. How many of them experienced a feeling similar to what the American consul felt? Probably few. Otherwise, Europe would never have allowed either brutal reprisals or desecration of ancient culture.

One of those who did not witness the horrors that happened in Smyrna, but wanted with his whole life to pay for the shame he experienced from the consciousness that he was a compatriot of the Europeans, who with cold calculation allowed the catastrophe in Asia Minor, was the French historian and philologist Octavius ​​Merlier. The tragedy of Asia Minor shocked him so much that, having married a Greek woman, Merlier left Paris and the Sorbonne and moved to impoverished Greece in order to help restore and develop relations between France and Greece that had shaken in 1922. After all, France was one of the great powers that betrayed Smyrna, and indeed the whole of Asia Minor Hellenism.

The Greeks of Asia Minor paid so terribly for the great idea that Catherine the Great once formulated, then the first constitutional prime minister of the country, Ioannis Kolettis, “shaken off” the dust of oblivion, and subsequently ingloriously tried to implement the most, perhaps, the most controversial politician of Greece, Prime Minister Eleftherios Venizelos, whose name the Athens airport bears today. Personal and state ambitions, tragic political mistakes did not just lead to the burial forever of the great idea of ​​u200bu200brestoring the Greek state within the framework of the Byzantine Empire. They led to the loss of Greece’s best sons, to the loss of Eastern Thrace, to the even more terrible tragedy of the expulsion of the Greek population from the Ionian coast and the tragedy of hundreds of thousands of refugees.

The tragedy of the Hellenism of Asia Minor has been written more than once – in different tones and angles, using various sources. Today, 100 years after the destruction of Smyrna, the tragedy of Asia Minor has practically “moved” to the pages of distant history. Moreover, the history that they are trying to rewrite even in Greece. Therefore, today, on the “black” anniversary, one should not only remember the hundreds of thousands of victims, but also once again think deeply about today. About how easily entire nations are sent to the guillotine, about how great ideas lead to great tragedies, and, most importantly, about how quickly the lessons of history, the lessons of greatness and betrayal, the lessons of love and hate are forgotten.

The culmination of Greece’s defeat in the Asia Minor campaign was the burning of Smyrna by the Young Turks. On August 27, the first detachments of Kemal entered Smyrna, and the day before, on August 26, three Greek ships anchored in the port of Smyrna. However, the crew refused to go ashore: its task was not to save the local population, but to evacuate the Greek soldiers and senior government officials of Smyrna. Aristidis Stergiadis, the minister of Ionia, the governor of Smyrna appointed by Venizelos himself, hastily climbed on the deck of the English ship, hastily leaving the population entrusted to him to the will of the Turkish knives.

The “lost paradise”, the pearl of Asia Minor Smyrna, is remembered not only by a few of its inhabitants who managed to survive, but also by those foreigners who chose Smyrna as their place of residence, abandoning the arrogant and cold London, wild America and arrogant Paris, who imagines himself to be the navel earthly civilization. Churchill later wrote in his memoirs: “To celebrate his triumph, Kemal reduced Smyrna to ashes and slaughtered the Christians.”

The New York Times correspondent will send a report to America with the following content: “Since 11 pm on August 28, I have not seen a single surviving Greek or Armenian house: the doors were broken down, the windows were broken, women were raped, men and children were impaled on bayonets, decapitated, strangled, torn to pieces, like old clothes. Turkish officers directed the actions of their soldiers, dragging the loot. Corpses, decapitated or whole, lie in the streets, an unbearable stench emanates from them.

And behind everything that happens – notice! – coolly, without trying to intervene, officers and sailors of the ships of the great powers standing on the roadstead are watching. According to eyewitnesses, the most heartless were the French. The British, according to eyewitnesses, looked at what was happening no less indifferently, but at least they did not finish off, like the French, those who were lucky enough not to drown and not lose their heads from the checkers of Turkish soldiers hunting infidels in boats, but to get to the ships .

Against the background of all this endless and indescribable horror – two figures: “black” and “white”. The “black” figure of the governor of Smyrna, Aristidis Stergiadis, and the “white”, radiating light, figure of the metropolitan of the city Chrysostom Kalafatis. They have forever become “cult”, only one is odious, the other is a saint. Moreover, one of the sources tells the following episode, from which it directly follows that Stergiadis deliberately left the Greek population of Smyrna to their terrible fate. Once, in a conversation with the then young Yorgos Papandreou, the grandfather of the already former head of PASOK and the country’s prime minister, Stergiadis said the following: everything is upside down!” The same sources claim that Stergiadis systematically prevented the Greeks of Smyrna from organizing resistance to the Turks and subsequently from an organized retreat from the city.

The fact is that not a single Greek ship ever appeared in the port. Aristidis Stergiadis, a close friend of Venizelos and his henchman, fled abroad a few hours before the first house in Smyrna caught fire. With those who took the torments of hell, there was a “white angel”, as the Metropolitan of Drama and Smyrna Chrysostomos was later called, recognized by the Orthodox Church as a martyr and saint. The church honors his memory on September 9.

On August 21, a week before the start of the massacre and his martyrdom, Chrysostomos writes a poignant letter to Venizelos, calling him “friend and brother.” “The Hellenism of Asia Minor, the Greek state and the entire Greek nation are descending into Hell, from which no other force can tear it out and save it. Your political and personal enemies are to blame for this incredible catastrophe, but you yourself bear a huge responsibility for your erroneous actions.

Chrysostom was born in 1867, exactly 145 years ago, to Nicholas and Kalliopi Kalafatis. They did everything possible to raise and raise their children with dignity: the father of Chrysostomos sold his land to teach his eldest son Eugene, and the land of his wife in order to send Chrysostom to the famous Orthodox school in Halki. Subsequently, Chrysostomos proved by his very life that he honors the canon established both for the clergy and civil servants, but extremely rarely fulfilled by them: the canon of the unity of word and deed. 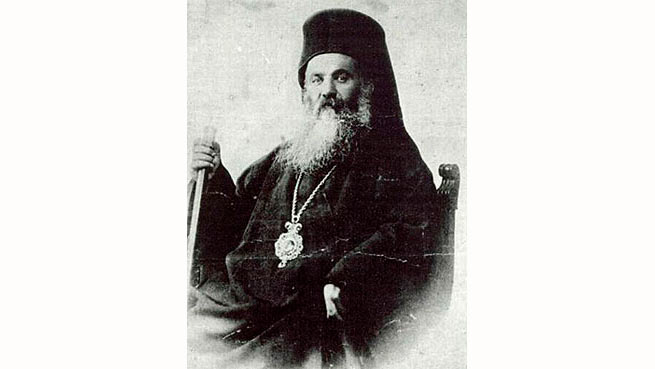 At the age of 35, in 1902, Chrysostomos received the high rank of Metropolitan of Drama. When the new metropolitan went to the patriarch to say goodbye, the head of the Orthodox Church gave him fatherly parting words, to which Chrysostomos replied: “With all my heart and with all my thoughts I will serve the Church and the Nation, and the miter that your holy hands laid on my head will soon turn in a crown of thorns, than I will lose at least one stone from her. Twenty years later, on August 27, 1922, Chrysostomos fulfilled his oath: for decades the scenes of his martyrdom tormented the sleep of both the Metropolitan’s friends and his enemies.

When the ship, on which its governor Aristidis Stegiadis escaped from Smyrna, painted with bloody fires, left the city port, the Turks solemnly pulled the bloodied stumps of the body of the Metropolitan of Smyrna to the gallows. One of the executioners of Chrysostom, who wanted to atone for his sin and therefore saved Mylonas and his students from Turkish dungeons, told the future academician Mylonas, the Greek of Smyrna, how the last metropolitan of the “lost paradise” was killed.

“They gouged out your metropolitan’s eyes and, bloodied, dragged him by the beard and hair along the lanes of the Turkish quarter. The crowd kicked him, kicked him, abused him, tore him to pieces. I was greatly impressed by the fact that he was silent, not answering a word, not begging for mercy and not cursing his murderers. His face, paler than death, covered with blood flowing from mutilated eye sockets, was turned to the sky, and he whispered something all the time. Do you know, teacher, what he whispered? the Turk asked Mylonas. “I know,” Mylonas replied. – He said: “Forgive, Lord, Your foolish children, they do not know what they are doing.”

“From time to time,” the Turk continued then, “he raised his hand and blessed his executioners. One of ours understood what this gesture meant and cut off both of the metropolitan’s hands, and then a long groan escaped from the father’s lips. A groan of relief, not pain. I took pity on him and put two bullets in his head.” When asked where the tortured body of Chrysostom was buried, the Turk replied that no one knows what happened to the ashes of the metropolitan.

It should be noted that Chrysostomos was one of those who called from the pulpit to the equality of people and peoples, called to fight against nationalism and inciting hatred between peoples of different faiths. Historians have no doubt that the assassination of Chrysostomos by the Turks was an instigated political assassination. He was killed not for what he did or said, but for what he would have done had he lived. The Turks had no doubt that the living Chrysostomos would have made every effort to defend the integrity of the Greek lands and would never have given up Eastern Thrace.

100 years ago, in a warm September, the cradle of European civilization, the Ionian city of Smyrna, was burned to the ground. Hundreds of thousands of people died for a great idea that could only end in tragedy. Great powers, great ideas, great leaders. How many of them were truly great, and what was their greatness? Like it or not, but in history “greatness” is usually measured by the number of souls destroyed in the name of it. . .