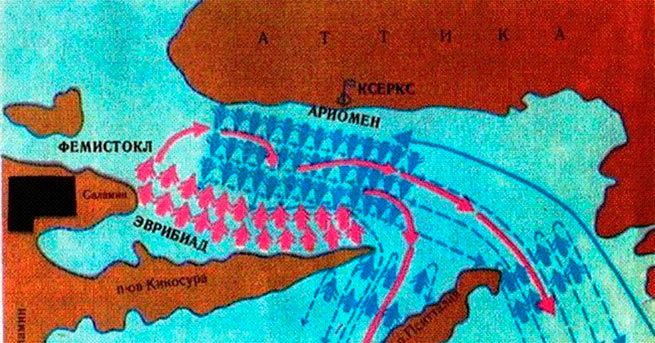 Twenty-second, according to other sources, September 29, 480. BC. The Battle of Salamis took place – the most important in the Greco-Persian wars, and in the whole of Greek history. For the victory of the Greeks created the prerequisites for the prosperity of both Greece and all of Europe. The advance of the Persians to Europe was stopped.

The struggle of the Greeks against the Persians became a fateful milestone in European history. If the Greeks were defeated, it would have been impossible to stop the invasion of Persian troops on Europe, and the European continent would have become part of the Persian Empire, and would be called Western Asia today.

This battle took place between the Greek and Persian fleets near the island of Salamis in the Saronic Gulf of the Aegean Sea, not far from Athens. For the Greeks, the only possibility of a decisive naval victory was a battle in a narrow space, where the numerical superiority of the enemy was leveled.

However, at first serious disagreements arose among the Hellenes. Most of the military leaders offered to leave Salamis and direct all forces to the defense of the Isthmus of Corinth. The Athenian strategist Themistocles pointed out that only in the conditions of narrow straits could the Greeks defeat the Persian fleet, which was superior both in the number of ships and in the quality of the training of sailors.

According to Herodotus, the Persian fleet consisted of about 1200 warships (other sources estimate the number of Persians at 600 – 800 ships), while the Greeks had 371 triremes. At dawn on September 28 or 29, 480 B.C. the two fleets stood face to face, ready for a naval battle.

Seeing the impossibility of influencing the decision of other military leaders, Themistocles decided on a trick. Having sent his trusted messenger to the Persian king Xerxes, he ordered to tell him that the Greeks were going to flee, and if the king wants to destroy the Greek fleet, then he should immediately start the battle.

On the morning of September 28, the Persian fleet launched an offensive. After a brief speech by Themistocles, the Greek ships put to sea. 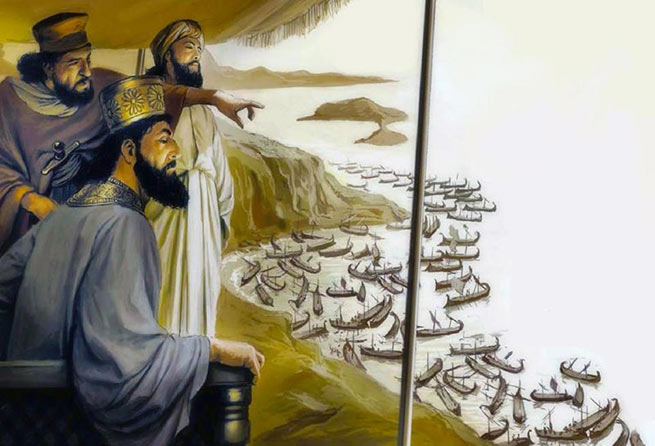 At dawn on September 28 or 29, 480 B.C. the two fleets stood face to face, ready for a naval battle. Xerxes, confident of his victory, sat on a golden throne on Mount Egaleo to enjoy the spectacle.

In the tragedy “Persians”, Aeschylus, a participant in the battle, conveys the paean (hymn), with which the Greeks entered the battle:

Save your homeland, save your wives,

His children, the gods of his father’s temples,

Ancestral Tombs: The fight is now for everything.

After the Persian fleet entered the narrow straits, its order was broken. The Hellenes began to pretend to retreat, after which they turned and attacked the even more disturbed formation of the enemy. The general confusion is evidenced by both Aeschylus, a participant in the battle in the tragedy “Persians”, and Herodotus. 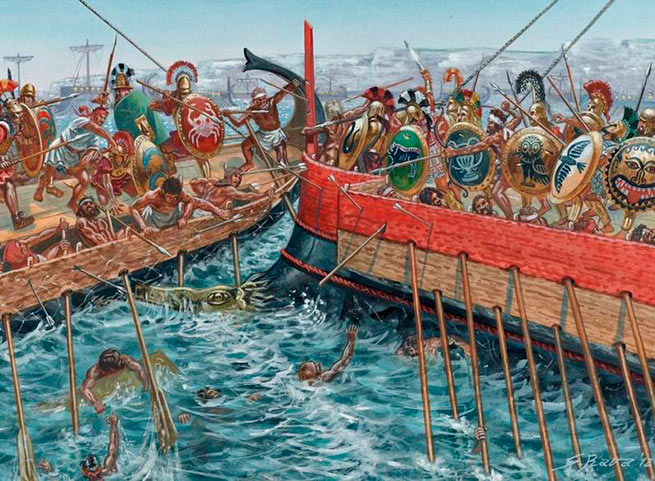 The battle continued all day, until in the evening the sea was filled with the wreckage of ships and the bodies of Persian sailors. Thanks to the excellent tactics and strategy of the Greeks, the Persians were defeated. The small and nimble Greek ships easily rammed and set fire to the clumsy huge Persian ships one after another. According to Diodorus Siculus, as well as the work of the German admiral Alfred Stenzel “History of wars at sea”, the Persians lost more than 200 ships, while the Greeks only 40.

The Persians suffered a crushing defeat. During the battle, Xerxes’ brother Ariabignus was killed. The magnitude of the losses is evidenced by the fact that the next year after the battle, the Persians, according to Herodotus, no longer had 1200, but 300 ships. There is no detailed description of the course of this battle. Unless the ancient poem “Persians” has come down to us …

And then the ships went to each other.
At first, the Persians managed to hold back
Head. When in a narrow place there are many
Ships accumulated, no one to help
I could not, and the beaks directed copper
His own in his own, destroying oars and rowers.
And the Greeks ships, as they planned,
We were surrounded. The sea was not visible
Because of the rubble, because of the overturned
Vessels and lifeless bodies, and corpses
The shallows were covered and the coast was completely.
Find salvation in a disorderly flight
The entire surviving barbarian fleet tried.
But the Greeks of the Persians, like tuna fishermen,
Anyone with anything, boards, debris
Ships and oars were beaten. Screams of terror
And the cries resounded the salty distance,
Until the eye of the night hid us…

During the naval battle, Aristides, with a detachment of selected Athenian hoplites, landed on the island of Psitalia and destroyed the Persian garrison located on it.

Xerxes, after a shameful defeat, took refuge with the remnants of his fleet in the Hellespont. At the same time, according to Herodotus, he was afraid that the Greek ships would sail to the Hellespont and block his way back.

According to Plutarch, a council was held between the Greek generals after the battle. Themistocles proposed to destroy the bridges in the Hellespont in order to “seize Asia in Europe”. Aristides opposed him: “Now we fought with a barbarian devoted to bliss. And if we lock him up in Hellas and bring a man who has such powers under his power to the last extreme, then he will no longer sit under a golden canopy and calmly look in the face of danger, he will participate in all actions, correct omissions and take the best measures for the salvation of everything as a whole. Therefore, Themistocles,” he added, “we should not destroy the existing bridge, but if possible, build another second and quickly throw this young man out of Europe.”

It should be noted here that his general Mardonius still remained in Greece with 300,000 army … 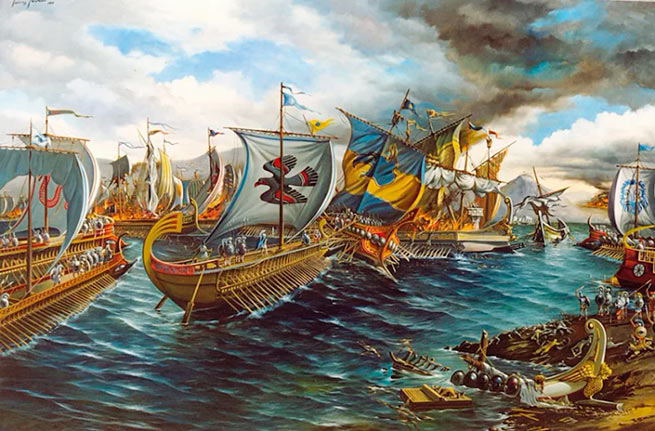 Themistocles agreed with Aristides and, in order to expel Xerxes from Greece as soon as possible, undertook another trick. He sent a scout to the king with a message that the Greeks wanted to destroy the bridges. Frightened, Xerxes began to hastily retreat. For the sake of appearance, he ordered to start building a pontoon bridge to Salamis, which the Greeks almost immediately and without difficulty destroyed. In addition to the fear of being cut off from Asia, modern historians point to another motive that required the immediate departure of the king to his homeland. The news of the major defeat of the Persian fleet could easily cause unrest within the Persian state. In the absence of a king, this could cause major uprisings of the peoples conquered by the Achaemenid empire.

The Battle of Salamis was a turning point in the Greco-Persian wars. With the flight of Xerxes and part of the Persian army from the territory of Greece, the immediate threat of the conquest of Hellas was prevented. A blow was dealt to the prestige and morale of the troops of the Achaemenid Empire (not to mention material losses).

(Based on Wikipedia and other sources).