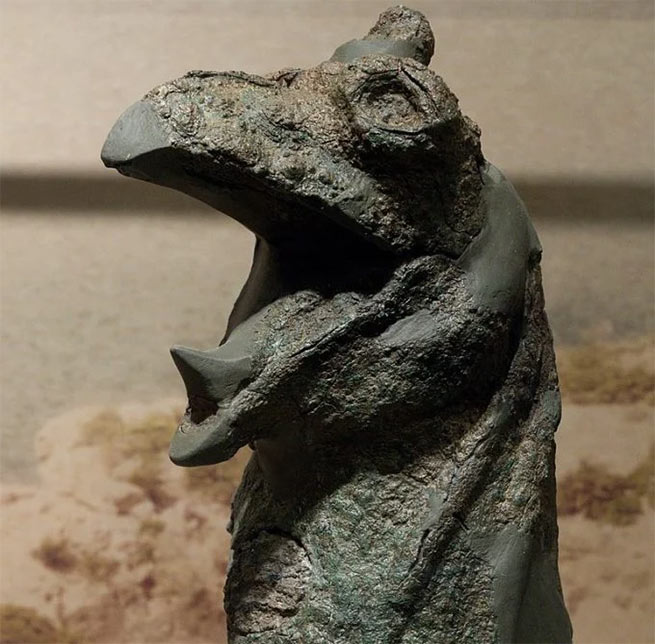 Griffins, unique mythological creatures with the head of an eagle and the body of a lion, were often mentioned in ancient Greek plays.

Griffins were considered noble creatures that lived during ancient Greece and other neighboring regions and guarded the rich gold deposits in the mountains of Scythia, today’s northeastern Europe.

The tribe of griffins that lived in the Ripean mountains and guarded the gold had an enemy: their one-eyed neighbors, the Arimaspians, who fought with them for these riches. The Arimaspians used horses to steal gold, and hence arose the eternal enmity that supposedly existed between the horse and the griffin.

Decorative griffins were popular in ancient Greek art and later in medieval bestiaries and heraldry.

Creature origin
Belief in the existence of this monstrous creature suggests that the origins of the myth are somewhere in the East, since variations of such a creature appeared in Persia and Egypt before 3000 BC.

Hesiod appears to be the first writer to mention griffins. In a later period, they are listed among the fabulous animals that guarded the gold of India.

The griffin is often used as decoration in ancient art. The earliest depiction of a griffin is engraved on a bronze platter commissioned by the Sami around 640 BC. Griffins were also carved on the helmet of a tall statue of Athena by Phidias, which adorned the Acropolis around 450 BC.

Griffins have been found in Minoan art since about 1500 BC, as evidenced by the frescoes and reliefs found in the Palace of Knossos in Crete.

Griffins in ancient Greek tragedies and comedies
In Prometheus Bound by Aeschylus (c. 479 BC) we read the following: “Prometheus warns the wandering Io: “Now listen to another terrible warning. Beware of the sharp-beaked hounds of Zeus that do not bark, the vultures and the one-eyed arimaspis, mounted on horses, that dwell at the flood of the stream of Pluto, which flows in gold. Don’t go near them.”

In the comedy “The Frogs” by Aristophanes (c. 405 BC) there is the following description: “Euripides: “They were all Scamanders, camps surrounded by ditches, and griffins-eagles, sparkling on shields with polished copper.”

Herodotus talks about the griffin
The great historian Herodotus (484-425 BC) wrote in his “History”, book 3: “But in the north of Europe, most of the gold. In this matter, again, I cannot say with certainty how it is mined but it is said that the one-eyed people, called Arimaspians, steal it from the vultures. However, the most remote lands, since they completely surround the rest of the world, are likely to have those things that we consider the most beautiful and rarest. “

Again from “History” 4: “He had in the city of Borisfenites (in Asia Minor) a spacious house, majestic and expensive (the same house that I just spoke about), all surrounded by sphinxes and vultures (griffins) of white marble” .

Another Greek historian of the 5th century, Ctesiaswrote in the Indica about the opinion of the Persians about India:

“There is also gold (in India) not found in rivers and washed, as in the river Paktholos (Paktol) [в Лидии], but in many large mountains that are inhabited by grips (griffins). These are four-legged birds, the size of a wolf, their paws and claws are similar to those of a lion; their chest feathers are red, the rest are black. Although there is a lot of gold in the mountains, it is difficult to get it because of these birds.”

Later Greek geographer Pausanias (110-180 AD) in his “Description of Greece”, book 1, wrote about griffins: “Grips (griffins), says Aristaeus of Proconnes in his poem, fight for gold with the Arimaspians (Arimaspians) for the Issedones. The gold guarded by the griffins, he says, comes out of the earth; the Arimaspi are people born with one eye; the griffins are beasts like lions, but with the beak and wings of an eagle.”

Pausanias wrote in his Guide to Greece, book 8: “I have also heard that griffoids have spots like a leopard.”

Greek geographer Strabo (63 BC – 23 AD) wrote about griffins in Geography, book 8: “Not far from the outlet of the river [реки Алфейос в Элисе] there is a sacred site of Artemis Altheonia … In the temple of Artemis Alpheionia there are very famous paintings … Aregon “Artemis ascended on a vulture”.

Greek sophist Philostratus (170-247 AD) wrote in the “Life of Apollonius of Tyana”: “The flu (griffins) of the Indians and the ants of the Aitiops (Ethiopians), although dissimilar in form, but, as we have heard, play similar roles, because in each country they, according to the stories of the poets, are the guardians of gold and are dedicated to the golden reefs of both countries.