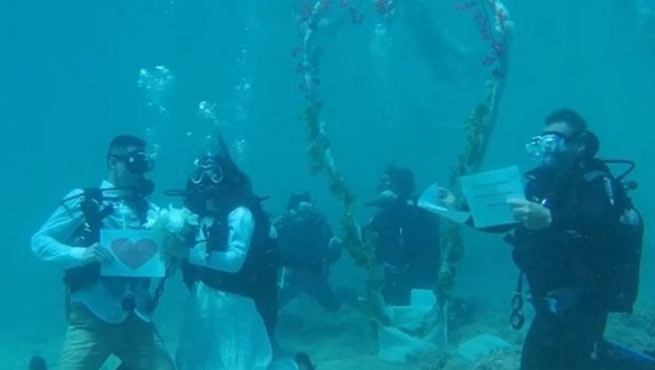 The good news that on Alonissos the mayor of the island married a couple under water caused surprise and public curiosity. How did this wonderful event happen?

“It was a wedding that was celebrated with all the details, the process lasted as long as a civil wedding on land – about 30 minutes,” says the mayor of the island, Petros Vafinis, and begins to explain how and why the municipality decided to organize underwater weddings: “With Since I became mayor in 2011, I have never delegated my authority to conduct wedding ceremonies.I really like this process.Civil weddings in beautiful and original places is what I started to do since I took over the island. We’ve had weddings on beaches, in chapels, in windmills and even aboard an airplane, and now we’ve decided we’ll be doing underwater weddings as well.”

It should be noted that underwater weddings are not paid, unlike diving lessons required for a couple who cannot dive but want to learn on the occasion of their wedding. “The couple you see in the video, Mirto and Peter, took about 4 or 5 diving lessons before having the wedding. We, as a municipality, enjoy the benefits of the island,” says Mr. Vafinis, and says that so far the underwater wedding ” flowed” at a depth of 5 meters, relatives and friends of the couple sat on the beach pier and watched the sacrament on the installed video wall, and they themselves sat under the shade of the installed sun canopies.

“At the same time, I was under the surface of the sea, displaying the wedding cake on laminated cards,” he continues, adding: “Rousoum Gialos Beach was chosen because it has room to create infrastructure for guests, as well as a beautiful seabed.” .

First underwater wedding in Alonissos: Petros and Mirto exchange love vows at the bottom of the sea

In fact, underwater weddings are just one of dozens of diving options on offer in Alonissos, which this year topped the Times of London list of 25 recommended Greek islands.

The most attractive dive is considered to be the first underwater museum in Greece, the ancient wreck of the Peristera, which is of great interest to the world diving community. “This year it is open for the second year, and it helped us a lot from a tourist point of view,” says Mr. Vafinis. increased interest in the areas of the protected marine park of Alonissos, in places where access to the general public is free.

“There, visitors can enjoy free diving, wildlife watching and amateur photography. The park has 15 different dive sites, each of which is beautiful in its own way. In addition, there are 3 private schools / centers on the island that educate and guide the public. I must say that this marine park is the largest protected marine area in Europe (about 2220 km2) In fact, the protection and rules of the park have provided both a framework and a reason for a well-protected from an environmental point of view, but attractive and important for us diving tourism.

Thus, over the past decade, we have promoted the island with all our might as a diving destination that offers you not one, but many experiences. Nowadays, tourists come here from all over the world. Just think that thanks to diving tourism, our season this year will stretch at least until the first decade of October.”

“They started, timidly but it’s true, their activity and until now organized diving center does not exist in Almyros”, explains Mr. Agorastos and adds: “So far the public is served by the diving centers in Volos and Trikeri, but we We hope that individuals will quickly show a business interest in Amaliapoli.”

These are sunken ships on Cape Glaros (in the bay of ancient Nies, from where, according to legend, the Achaean fleet sailed to Troy), on the island of Kykinthos and in the bay of Tilegrafos. “It should be noted that the Sporades also have the Agios Christoforos wreck in Panormos, Skopelos, which is suitable for advanced divers as it is at a depth of 26 meters,” adds Mr. Agorastos. ships in the wider Pagasitikos region, which is an example for many other regions of Greece that have similar treasures in their seas.”

Diving on the wreck of the Peristera
The truth is that the success story of Alonissos has recently paved the way for removing the doubts and inhibitions that employees of the Department of Air Antiquities and the Ministry of Culture often had about visiting underwater wrecks. Thus, a few months ago, we came to a joint decision of the Ministers of National Defence, Culture and Maritime and Island Policy, which determines the conditions for recreational diving on 91 wrecks and aircraft classified as monuments by the Ministry of Culture and Sports. These are 91 fragments of metal ships and aircraft that sank between 1868 and 1970, most of them belong to the period of the Second World War. The wrecks are located at a depth of 10 to 120 meters.