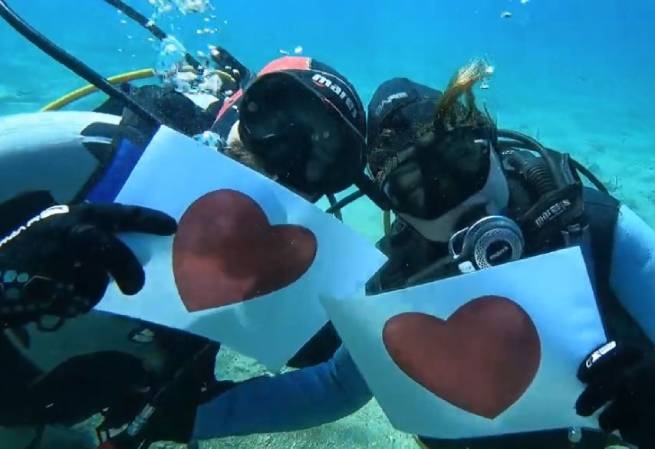 The first underwater wedding took place in Alonissos. The newlyweds exchanged vows of love and fidelity, and exchanged their first kiss as spouses, taking off their masks for a moment.

In order to carry out the ceremony, initiated by the municipality, in accordance with the rules, the mayor of Alonissos, Petros Vafinis, had to obtain a diving license.

The ritual was followed exactly. Special waterproof surfaces were used to comply with all formalities. The operator filmed the wedding with an underwater camera, and it was broadcast live to the invited guests. Standing on the shore, they could watch all the nuances of the celebration on a large screen specially installed for this purpose. According to the Athens News Agency, it was also possible to watch the ceremony from a mobile phone. The mayor of Alonissos said after the ceremony:

“Indescribable feelings that overwhelm you downstairs during the wedding. Under the ideal conditions of tranquility offered by underwater nature, time stops and this moment belongs exclusively to the couple. Back in February, on Valentine’s Day, a request was received from the municipality to organize an underwater wedding, which immediately piqued the interest of couples. Our goal is to open a new market for Greece and the island.”

Alonissos is turning into an international diving destination. This year it was chosen by hundreds of scuba divers from all over the world. Throughout the summer, the island recorded high occupancy (100% in August). The tourist flow will continue in the first half of October, reports newsbeast.gr, referring to the words of the mayor.