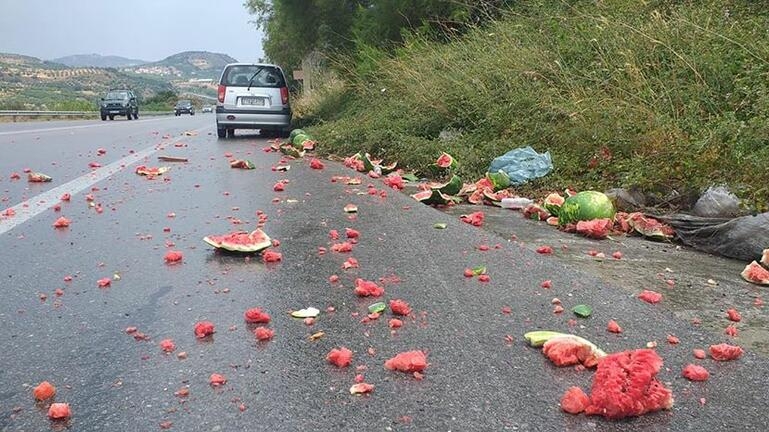 During an accident on the road, the body of the truck opened up, and watermelons fell onto the road, turning into a “mess”.

What could be collected was put into bags and transferred to the reserve, which kept animals. That was some joy! A video of animals attacking a treat has gone viral.

According to the publication lifo.grat the end of July, when the Louisiana Watermelon Festival was in full swing, a truck carrying more than 100 watermelons and melons near the festival site had an accident, and the cargo became unusable.

The crash (in which no one was hurt) would have thrown the juicy fruit into the trash if wildlife activist Leslie Greene hadn’t shown up.

“I asked the owner of Yak’s Produce, ‘Well, since you’re not going to use all these already spoiled watermelons, can I take them for the animals kept in the reserves?'” says the 46-year-old woman. “If they could go for some other purpose instead of being thrown out, that would be great.”

Yak’s Produce has delivered fruit to a 16-acre wildlife sanctuary that houses a wildlife rescue service that currently has 42 individuals, including beavers, raccoons, ferrets, opossums, goats and more. “Everything went like clockwork,” says the 46-year-old activist, who shared her joy on social media. – My pets liked the delicacy. In such heat, it was “the most it”!

Beavers were the first to taste the juicy fruits. “I threw a piece of watermelon over the fence and they started coming out of their houses,” said Leslie Green.

Green’s reserve is located in the countryside. The enthusiast rescues, heals, and then releases wild animals that have suffered from predators and poachers into the forest. Together with her pilot husband, they own over 400 acres of land in Homer, where the couple release fully cured animals after they are rescued.

“I love animals. I love helping them,” says Green, who runs the nursing home. “I have always enjoyed being cared for. If someone or something needs me, I feel great.”

♬ Send Me on My Way – Guy Meets Girl