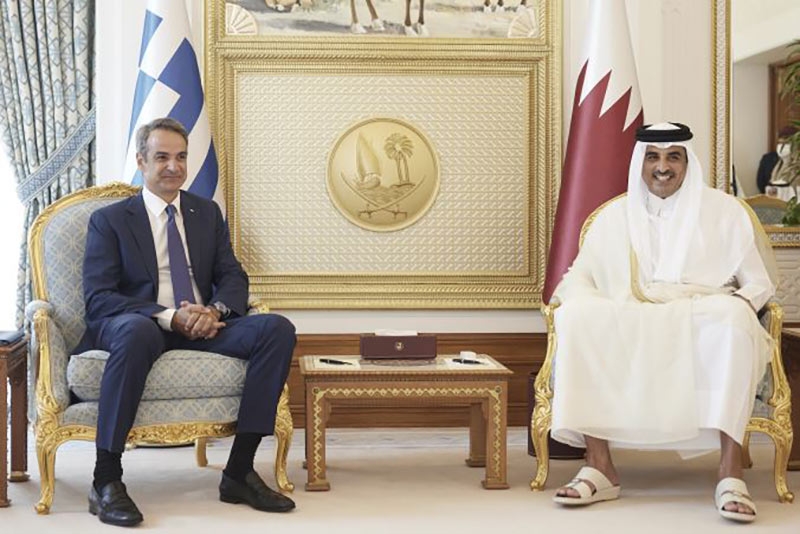 Prime Minister Kyriakos Mitsotakis made his first official visit to Qatar today, which indicates the special interest of both sides in further strengthening bilateral relations in the face of regional instability and the energy crisis.

During the meeting of Kyriakos Mitsotakis with the Emir of Qatar, Sheikh Tamim bin Hamad Al Thani, a mutual desire was established to deepen cooperation in the field of energy, as well as in the fields of tourism, infrastructure, agriculture, culture, sports and sciences.

The two leaders discussed current regional developments. The Prime Minister underlined the need to maintain a climate of stability in the wider region and avoid actions that undermine the peace amid the unrest caused by the war in Ukraine. He also acknowledged the role of Qatar in the critically important for the interests of Greece region of the Persian Gulf after the adoption of the Al-Ula declaration, mentioning the important role of Doha and the Emir personally in resolving crises in Chad, Palestine and Afghanistan.

During the meeting, special emphasis was placed on the energy sector, the possibilities for strengthening and systematizing cooperation in the energy sector, taking into account Qatar’s leading position in natural gas production and the government’s strategy to diversify energy sources and the country’s energy security.

Greece, Kyriakos Mitsotakis stressed, due to its strategic position in the region and its infrastructure, can be a bridge between Qatar and Europe, a gateway for energy to enter the European market – both through the Revitoussa station and through Alexandroupolis.

Kyriakos Mitsotakis stressed that Greece is a reliable partner, a pillar of stability in the region. He briefed the Emir of Qatar on Greece’s August 20 exit from enhanced creditor supervision, which opens a new chapter, as well as investment opportunities offered by Greece.