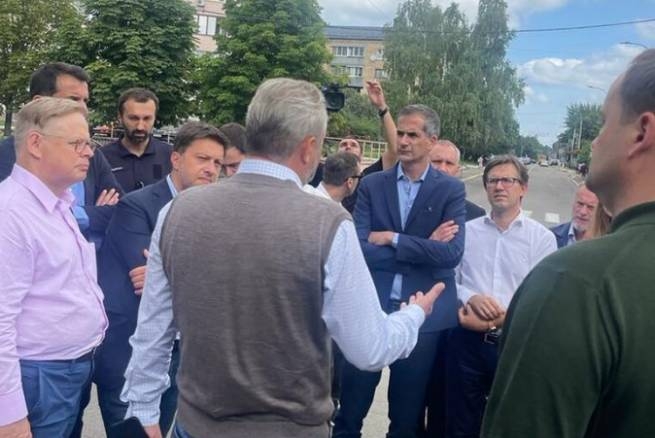 Mayor of Athens Kostas Bakoyannis, as part of a delegation of heads of European cities, visited the Ukrainian capital Kyiv on Friday. He met with Kyiv Mayor Vitali Klitschko and Ukrainian President Volodymyr Zelensky and signed an agreement to support the sustainable recovery of Ukrainian cities.

The purpose of the European Mayors’ Mission was to sign this agreement. It took place in the presence of the President of Ukraine and signed by his representative. The document provides for a cooperation plan to cover all reconstruction needs. The initiator was the Eurocity network, in which Athens participates. In a joint communiqué after the signing, the mayors of Athens, Florence, Helsinki, Marseille, Lyon, Oslo, Tirana, Riga and Kyiv noted:

“We, the mayors and leaders of European and Ukrainian cities, condemn the Russian war in Ukraine and call for the immediate withdrawal of Russian troops and the restoration of peace. We pledge to join our efforts to prepare and implement the rapid and sustainable recovery of Ukrainian cities destroyed by Russian attacks since February 24, 2022 of the year”.

The President of Ukraine, in turn, addressing the heads of European cities, said:

“It is very important that you, the mayors, showed courage in the midst of the war and came to Ukraine, to our capital Kyiv. Many thanks to your governments. I appreciate your support in our struggle for national sovereignty and territorial integrity. Especially now your visit is very important. When we talk about aid and support – humanitarian, military, political – it’s also important not to forget the help to rebuild our cities and communities. And it’s important that reconstruction start not after the war, but now. Ukraine could return to normal life. It is very difficult for us, for our budget. Because we spend almost all the money to strengthen the army. So we will be grateful for the help.”

Kostas Bakoyannis noted, writes CNN Greece, that support and active contribution to the reconstruction of Ukraine is the obligation of the entire democratic world:

“The restoration of Ukraine is a long process that must begin today. The democratic world must be ready to support this marathon with strong will and determination. Athens will participate with all its might in the common European effort to rebuild Ukrainian cities and support the friendly Ukrainian people.”

Dario Nardella, head of the delegation in his capacity as President of the Eurocity Network of Cities and Mayor of Florence, stated:

“We want to express hope, support and solidarity to the Ukrainian people in the name of a peaceful and democratic future. We, the mayors, as politicians who are closest to citizens, conveyed this closeness and solidarity on behalf of the peoples of all Europe during our meeting with President Zelensky and our colleagues mayors of Ukraine”.

A mixed international group, consisting of political representatives of the Eurocity network, the Union of Ukrainian Cities and the Presidential Administration of Ukraine, will meet regularly to monitor the implementation of the agreement. The Secretary General of the Eurocity Network of Cities participating in the mission noted:

“Our member cities have a long history of cross-border cooperation, including with Kharkiv, Kyiv, Lviv and Odessa – cities that are all members of the Eurocities Network. The mayors present at the meeting, as well as many of their colleagues, expressed a strong desire to pool our resources as urban planners and share this experience to build inclusive and sustainable cities in Ukraine.”

“I am shocked by the images I saw and the stories we were told. We have no right to forget. Our trip to the destroyed Ukrainian cities also has this goal. Do not forget how destructive this war is, how many lives of innocent people have been lost, how much suffering and pain survivors. However, I bow to the unparalleled steadfastness of the inhabitants of Borodianka, Bucha and Irpin. In general, the Ukrainian people and their leadership – their resistance is heroic. Their will to remain an independent nation and a free democracy is unshakable. We have been and will be on their side.”

On Friday, the delegation met with the mayor of Kyiv. Kostas Bakoyannis and Vitali Klitschko, who maintain close cooperation, announced the continuation of the twinning of Athens and Kyiv.

Mr. Bakoyannis also met with the Hellenic Chargé d’Affaires in Kyiv, Mr. Manolis Androulakis, who, as Consul General in Mariupol, was the last foreign diplomat to leave the city, ensuring the safe exit of hundreds of expatriates and personally escorting the final convoy. He informed the mayor of Athens about the needs of the Greek diaspora in Ukraine, which has been present in the country for centuries.

The agreement, signed by the mayors of European cities, is based on the following main principles:

The Memorandum of Understanding that accompanies the agreement details the “obligations” of both parties. The member cities of the Eurocities network are committed to:

The Union of Cities of Ukraine, together with the Office of the President of Ukraine, undertakes: