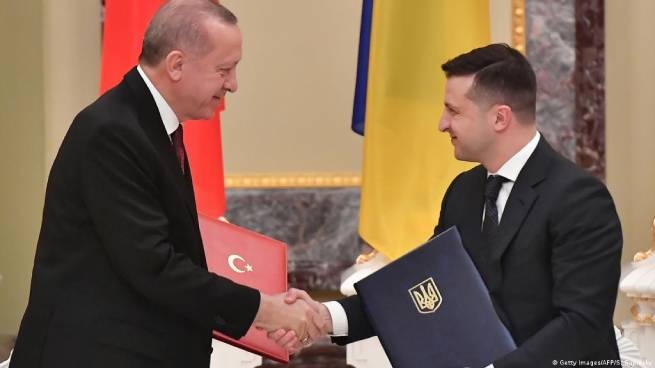 During a meeting between Ukrainian President Volodymyr Zelensky and Turkish President Recep Tayyip Erdogan in Ukrainian Lviv, a memorandum of understanding was signed providing for the participation of the Turkish side in the post-war reconstruction of Ukraine.

The document was signed by the Minister of Infrastructure of Ukraine Oleksandr Kubrakov and the Minister of Trade of Turkey Mehmet Mus in the presence of the presidents of the two countries. The press service of the Presidential Administration of Ukraine reports:

“It is assumed that Turkish state and business structures will be able to develop specific restoration projects, as well as provide consulting and technical assistance.”

As the first project, the restoration of the bridge connecting Bucha and Irpen with the Ukrainian capital, located in the village of Romanovka, Kyiv region, is being considered. During the Russian invasion of Ukraine, it was completely destroyed. The parties agreed to create a joint Ukrainian-Turkish working group on restoration issues.

During the meeting in Lvov, the Presidents of Turkey and Ukraine discussed a number of topical issues: the situation around the Zaporizhzhya NPP, cooperation in the field of defense, issues of the export of Ukrainian grain. Regarding the ZNPP, Erdogan said:

“We are worried about the skirmishes at nuclear power plants. We do not want to experience another Chernobyl. We are on the side of Ukraine and will be on its side in the future.”

Volodymyr Zelenskyy expressed hope for the participation of the President of Turkey in the second summit of the Crimean Platform, and also noted that Erdogan’s visit is a “weighty message” and thanked him for supporting the sovereignty and territorial integrity of Ukraine.

Regarding possible negotiations with Russia, President Volodymyr Zelensky said that negotiations are possible only when Russian troops leave the illegally occupied territory of Ukraine.

Foreign Minister Dmytro Kuleba assured that during the meeting in Lviv of the presidents of Ukraine, Turkey and the UN Secretary General, Ukraine was not pushed to make concessions to Russia. He noted that Turkish President Recep Tayyip Erdogan and UN Secretary General António Guterres sincerely empathize and really want to help Ukraine find a solution.