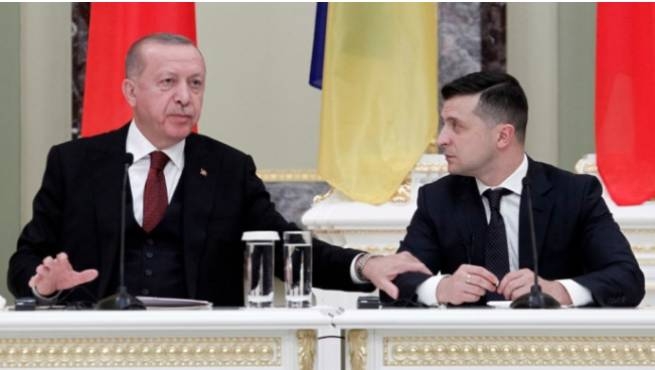 Today, Turkish President Recep Tayyip Erdogan arrived on a full visit to Ukraine. In addition to the main topics, the media write, a possible end to the war through diplomacy will be discussed.

CNN Turk, referring to its own sources, declared its readiness for direct negotiations between Zelensky and Putin. And the Turkish TV channel A Haber, citing sources in the diplomatic environment, previously reported that Erdogan would offer Zelensky to organize his meeting with Putin. In addition, the presidents of the two countries will discuss the export of grain, aircraft (the return to Turkey of two aircraft of the Turkish Air Force A440M, which were in Ukraine before the war and continue to remain here) and Ankara’s mediation in the exchange of prisoners – this is reported by the media.

Erdogan’s first visit to Ukraine since the start of the Russian invasion, even before it began, gave rise to numerous rumors that the Turkish president is carrying some kind of plan to end the war, which he wants to offer Zelensky. Rumors ranged from a temporary ceasefire agreement to a compromise peace treaty between Ukraine and Russia.

Various parameters of a possible agreement were also discussed – from the “Korean option” (fixing the current front line) to the retreat of Russian troops to the line on February 23 in exchange for some kind of counter decisions from Ukraine. These can be broad autonomy for the southeast, neutral status, demilitarization of border areas and, of course, the lifting of sanctions by the West.

While there is no evidence of the validity of these assumptions, these are all versions of the media. It is quite possible that Erdogan’s main task is not Ukraine at all, but switching attention from the upcoming Turkish “special military operation” against the American-backed Kurdish forces in Syria and minimizing resistance to it at the level of international organizations (primarily the UN).

But it is likely that Erdogan will offer Zelensky to resume negotiations with Moscow to end the war, he talks about this quite often. And he will make a similar offer to Putin. The readiness of the President of the Russian Federation for direct negotiations with the Ukrainian President on Thursday, August 18, is reported by CNN Turk. According to the publication, Putin allegedly hinted at negotiations with Erdogan on August 5 that he could meet with Zelensky, quotes “Country”:

“Now, in order to stop the war, the Russian side has said: “First, the leaders can discuss and define a roadmap. Delegations can then start working to bring this roadmap to life.”

Be that as it may, the Turkish leader, according to the media, will today convey to the Ukrainian president that Putin has expressed readiness for direct negotiations with him.

Now UN Secretary-General António Guterres is in Ukraine, after the meeting of the two presidents, it is planned to hold a trilateral summit with the participation of Erdogan, Zelensky and Guterres, and then a joint press conference.