The weather service for the National Observatory of Athens said on Thursday that Greece experienced a significant and “alarming” increase in wildfires in the first months of 2022 compared to previous years.

The report notes that after the extremely destructive 2021 wildfire season, statistics for the first three months of 2022 are still dangerous, based on an analysis by the European Wildfire Information System (EFFIS).

In particular, the latest statistics (from the beginning of 2022 to April 9) show an almost exponential increase in the number of forest fires, which is about 750% compared to the average for the period 2008-2021.

Equally alarming is the extremely large increase in the total area of ​​fires in our country, which reaches 275% compared to the average for the period 2008-2021.

Chart 1: Total number of forest fires in the first quarter of 2022 (orange line). The black line shows the average forest fires for the period 2008-2021, and the shaded gray area shows the range between the maximum and minimum values ​​for the same period.

It is extremely important to note that in absolute terms, both the number of forest fires and the total area of ​​burnt lands record the highest values ever observed in Greece during the first quarter of the year, from 2008 to 2021.

More: From the beginning of 2022 to April 9, 2022, EFFIS maps recorded 30 forest fires in Greece compared to 4.4 (fires) that were recorded on average during this period, with 10,330 acres burned compared to 375 acres on average over the same period. 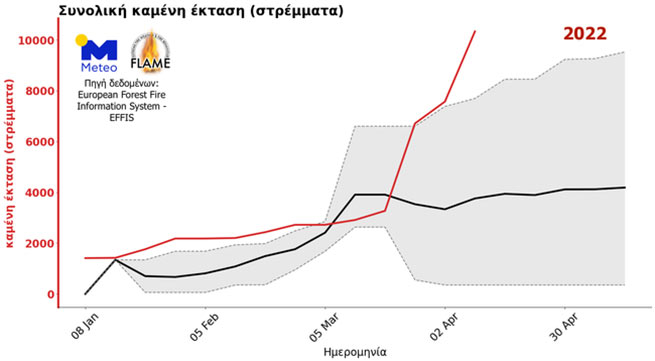 Chart 2: Total fire area in the first quarter of 2022 (red line). The black line shows the average fire area for the period 2008-2021, and the shaded gray area shows the range between the maximum and minimum values ​​for the same period.

Note that the fire season begins on May 1 and ends on October 31, and this year it began almost immediately after the snow melted.

The vast majority of wildfires and wildfires are believed to be caused by deliberate arson or negligence.