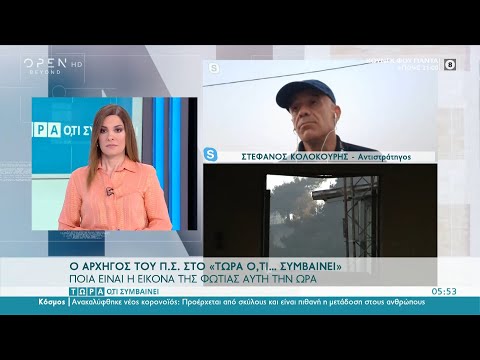 Fire in the Gerania mountains flared on Wednesday night and having destroyed more than 22,000 hectares (55,000 acres) of forest, it has been in a state of extinction for several hours.

“The fire as a whole shows a picture of a decline, but there are separate fires around its perimeter,” Chief of the fire brigade, Lieutenant General Stefanos Kolokuris, who coordinates the extinguishing work, said in an interview with OPEN TV.

According to the firefighters, by tomorrow the fire that broke out late on Wednesday evening in Schinos, Loutraki, Corinth, will be localized and in the near future finally liquidated.

Firefighter aircraft on May 21 in the sky near Megara

The firefighters’ “ally” was the fact that the winds, which on Thursday reached the force of the storm, reaching 8-9 points, have now dropped to 2-3 points on the Beaufort scale.

In the morning, 278 firefighters in 89 vehicles, 10 groups of pedestrians, a special fire brigade vehicle, and the Olimp mobile business center are working in the area of ​​the fire, in the Gerinia mountains, while 16 firefighting aircraft 4 helicopters help them from the air, 4 helicopters, 2 of which extinguish fires, 1 fire department helicopter is engaged in the search and reconnaissance of fires and 1 helicopter as a mobile coordination center. Firefighters are assisted by volunteers, tank truck drivers and heavy equipment – bulldozers and excavators from local governments and individuals.

It is noted that the fire brigades are on general alert in Attica and the Peloponnese, while in other parts of the country, firefighters are on partial alert.

On Thursday morning, May 20, the Sentinel-2 satellite flew over West Attica and East Corinth, taking a picture of the fire from above. The photo shows the burned-out areas (they are brown in color), through which the fire passed, as well as places where there is an active fire front and a cloud of smoke.

The investigation points to negligence

The first footage since the start of the fire

How quickly the fire grew

The Schinos fire was reportedly on Wednesday at 9:45 p.m. and quickly spread to the surrounding area due to strong winds and resin containers scattered in the dense pine forest. “By early morning, the flames had overcome 10 kilometers from the starting point,” said a representative of the Ministry of Civil Protection.

Already on Wednesday evening, by order of the head of the fire department Stefanos Kolokuris, the fire brigade of the Attica metropolitan district left to extinguish the fire.

The Directorate of Investigation of the Fire Department (DAEE) launched an investigation, as they say, in hot pursuit. According to forensic experts, the fire started from the olive grove. A competent fire brigade officer said yesterday that the DAEE group is also looking into evidence that the fire started from a spark in the high-voltage transmission cables. Something similar happened in the case of the big fire of 2018 in Kinet. However, a police spokesman, who was asked, explained that according to the investigators who “walked” to the “zero point” of the fire, it was determined that no power lines pass through this place.

Until yesterday night, investigators were collecting evidence, but, according to official information from the fire brigade, they did not proceed with the arrest or, moreover, the arrest of the suspect.

“Everything indicates negligence, but we do not have an exact idea of ​​the cause of the fire,” said Vasilis Vatrakogiannis, a spokesman for the fire brigade.

The MegaraTv drone attempted to capture the scale of the disaster in this shocking video.