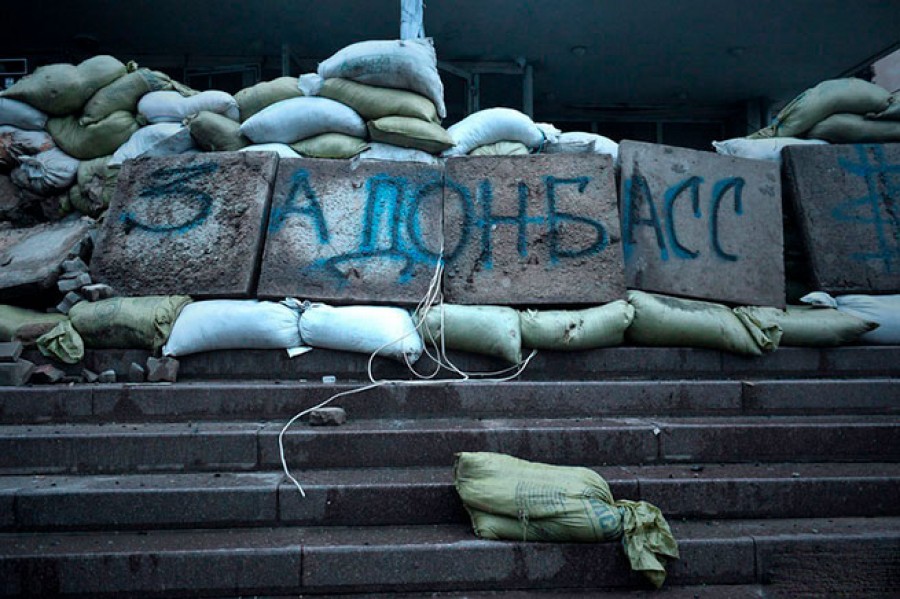 Seven years after the annexation of Crimea to the Russian Federation and the position of Russian-speaking separatists in the Donetsk and Luhansk regions in eastern Ukraine, Kiev seems to have decided whether it’s time to return to the “frozen” conflict …

“Russian Athens offers the readers’ attention the translation of the publication Τύμπανα πολέμου σε Κίεβο, Μόσχα (Drums of War in Kiev and Moscow) of Greece’s leading publication Katimerini (Daily), which is considered the mouthpiece of the New Democracy government.

Seven years after the annexation of Crimea to the Russian Federation and the transfer of power into the hands of Russian-speaking separatists in the Donetsk and Luhansk regions in eastern Ukraine, isn’t it time to return to the “frozen” conflict? This issue has been on the minds of the leaders of the states involved and their allies lately, as worrying omens are rapidly piling up.

Since early 2021, both the Ukrainian army and Russian-speaking paramilitaries have reported a series of ceasefire violations. At the same time, at least 10 Ukrainian soldiers died and an unknown number from the other side. Units of the Ukrainian army are moving towards the green line, and Ukrainian drones are stepping up overflights. Recently, Ukrainian Foreign Minister Dmytro Kuleba announced that the National Security and Defense Council has approved a strategic plan for the return of Crimea and control of Donbas (Donetsk and Lugansk) by Kiev.

In response, the Russian Foreign Ministry sternly warned Kiev to refrain from any attempts to solve the problem by force of arms. In turn, Russian President Vladimir Putin stressed that his country “under no circumstances will turn its back on Donbass.” The escalation of controversy also concerns Turkey, which in 2019, when Petro Poroshenko was still president of Ukraine, signed an agreement on the provision of Turkish TB2 drones to the Ukrainian army. Last week, Russian media reported that thirty drones of this type were delivered to Kiev.

It is an unmanned aerial vehicle (UAV) or drone called Bayraktar TB2, manufactured by the Turkish company Baykar, in which President Recep Tayyip Erdogan’s son-in-law, Selcuk Bayraktar, is the chief technical director.

Until recently, there were high hopes for a completely different course of relations between the two former Soviet republics. Volodymyr Zelenskiy defeated Poroshenko in the April 2019 presidential election (73% versus 25%), distancing himself from the far-right nationalists who supported his predecessor. After gaining a large audience in Russia and other countries of the former USSR, the successful Russian-speaking television comedian who became president at 41 has promised to do his best to peacefully resolve disputes with his big neighbor. In the first year of his presidency, he withdrew Ukrainian troops from the most advanced positions they occupied, showed tolerance for pro-Russian parliamentarians and oligarchs in his country, and sought a settlement with Moscow to resolve the Donbass problem.

Participants of volunteer battalions that fought from the Ukrainian side do not hesitate to display Nazi symbols.

However, these efforts were unsuccessful. First, Moscow did not want to discuss Zelensky’s demand for a revision of the Minsk ceasefire agreement reached by Russia, Ukraine, France and Germany (which recognized the Ukrainian state on the one hand, and its paramilitaries like the warring parties, Donetsk and Luhansk, on the other Secondly, Zelenskiy wanted Russia to be recognized as a stakeholder and to assume the appropriate obligations. Instead, Moscow began to issue Russian passports to the citizens of Donbass, turning it into a de facto Russian protectorate. Last fall, the Nagorno-Karabakh conflict played a role The Ukrainian leadership was excited by the overwhelming victory of Azerbaijan with the help of Turkey over Armenia and began to foresee something similar for Donbass, ignoring the fact that Putin’s Russia is not Pashinyan’s Armenia.

In the photo Victoria Nuland and the Ambassador Jeffrey Pyatt share food with the staff of the Golden Eagle, with those who may later die on the command given from the US Embassy

Two other factors appear to have played a decisive role in the escalation of tensions. First, the aggressive line against Russia adopted by the new US President Joe Biden. The fact that Biden returned to the State Department Victoria Nuland, the “hawk” who played a leading role in the Maidan crisis and the ouster of Yanukovych in 2013-2014, was a very clear signal. The loud announcement by US Secretary of State Anthony Blinken that his country would never accept the annexation of Crimea prompted Zelenskiy to follow suit in order to keep up with his patriotic zeal. Although he knows perfectly well that the restoration of Crimea (and Sevastopol, where the naval base of the Russian Black Sea Fleet is located) is unthinkable without Russia’s humiliating defeat in the war, which even in the wildest dreams cannot be imagined in Kiev.

The second factor is the huge number of human lives lost and the spread of poverty, which is the price Ukraine is paying because of the pandemic, which is putting strong political pressure on the government to look for distractions on the national security front. It is at this moment that Zelenskiy is changing dramatically, shutting down three Russian-language TV channels and imposing sanctions against oligarch Viktor Medvedchuk, one of Vladimir Putin’s most influential allies in Ukraine.

President of Ukraine Volodymyr Zelenskyy, by his decree, introduced into immediate effect the decision of the National Security and Defense Council (NSDC) “On the application of personal special economic and other restrictive measures” (sanctions) “- and as a result, three national channels: 112, News One and ZIK, which were immediately called “pro-Russian.” Opponents of the decree claim that Zelensky’s decision was illegal and usurped.

However, the Ukrainian president will think very seriously if he takes an irreversible step separating the psychological war from the real one, knowing that the risk will be unimaginably high both for him and for his country. In the end, despite his anti-Russian stance, Joe Biden does not seem to trust him, as evidenced by the fact that he never received a call, even two months after taking office. In an interview with the American magazine Politico, the former American official said that “it makes sense to keep Zelenskiy waiting for a phone call. He does not fight corruption with all his might. “In fact, Ukraine’s pro-Russian oligarchs have made tremendous strides since Zelenskiy took office.”

Turkey is in danger of getting involved in games with fire. Tayyip Erdogan supported the prospect of Ukraine joining NATO, which has become a serious irritant for the Kremlin, while Turkish Deputy Foreign Minister Yavuz Selim recently condemned the “unacceptable” annexation of Crimea by Russia and spoke of Russian persecution of the (Turkish) minority on the peninsula. However, active military support for Kiev in Donbass (we are not talking about Crimea, because it would clearly be a casus belli) would become a real torpedo in Russian-Turkish relations, immediately canceling out all the impressive progress made with the S-400, the Akyuyu NPP and reconciliation on the Syrian front.

Militias (L) of the DPR, whom Kiev has officially declared terrorists. For participation in hostilities on the side of the separatists, they face 15 years in prison. And when captured – torture and extrajudicial executions (recorded by the OSCE mission and human rights organizations).

Back in October, Russian Foreign Minister Sergei Lavrov issued a warning: “We never considered Turkey a strategic ally of Russia. “Turkey is a close partner.” At a time when the Turkish economy is in grave danger, Erdogan will carefully consider the possibility of a break with Russia, although in fact his efforts to build bridges with the US, EU and Egypt have not yielded tangible results so far. In any case, there are many reasons to doubt the rather mythical value of Turkish weapons and especially drones. Some of them Russian-speaking in the east of Ukraine have already shot down, possibly with the help of Russia, reminding once again that Donbass is not Nagorno-Karabakh.