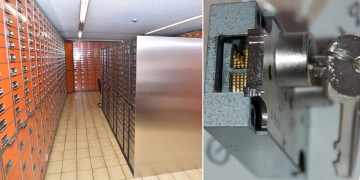 The 58-year-old man accused of the sensational theft of bank cells in Psychiko, arrested by the police on Wednesday, is expected to be brought before an investigator today.

As it turned out, earlier he was repeatedly prosecuted for thefts, while he “came out clean”, thanks to his lawyers. So this time it started the same way. “The person being prosecuted denies the accusation and strongly protests against the detention and any actions of the authorities against himself and his family,” his lawyers Antonis Voulgarakis and Vasilis Seremetis said in a joint statement, urging “to respect the presumption of innocence”.

Chronicle of thefts from a bank vault
The theft was reported after a complaint was filed on November 13, when a woman, a member of a prominent family in the northern suburbs of Athens, discovered that jewelry from her personal cell was missing. An immediate investigation was launched into 1,000 lockers at a bank branch, resulting in three more hacked.

All 4 owners of bank cells are women, residents of the northern outskirts of the capital, wives, mothers and sisters of famous businessmen. The ladies said that among the stolen items there are jewelry worth millions and hundreds of thousands of euros, cash, gold coins and other valuables.

How did you manage to find the criminal

According to the available information, the 58-year-old man, most likely, was given traces of DNA obtained from biological material inside the cells (particles of the skin and sweat marks).

Thus, when the investigation led to 4 potential attackers, it was the DNA analysis that indicated which of them was guilty of theft.

The accused, the husband of a famous person working on Greek television, was in the spotlight from the very beginning, because he had the same locker, in the same row and next to those that were hacked.

Recall that the man in the past was charged with theft, fraud, embezzlement and participation in a criminal organization that committed fraud (online poker and gambling).

How many times has he been to the bank
CCTV cameras, which recorded the movement of the 58-year-old man, were also in the center of attention of the authorities. According to the information received from them, the accused entered the bank vault in Psychiko five times: twice in October last year, and three others between August 10 and the end of the same year (at the same time when the cells were supposedly opened) …

However, videos of specific visits were removed according to the protocol. However, CCTV footage inside and outside the bank branch shows that the 58-year-old man tried to hide his “identity” during specific visits. The authorities did not specify whether the theft from the lockers was partial, or whether all of their contents were missing.

Another conclusion reached by the authorities is that the alleged perpetrator broke into 4 lockers using the same lockpick. The investigation is ongoing, and the authorities are expected to be ready to begin lifting confidentiality from the defendant’s cell phone calls within a specified period of time.

Meanwhile, the search for stolen goods did not bring any results. Thus, the authorities are looking for a cache where expensive items and a huge amount of cash (about 5 million euros) are stored, since it is assumed that the suspect is unlikely to “share” this information with anyone.