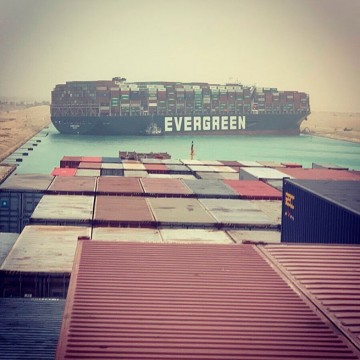 A huge container ship blocked traffic in the Suez Canal and caused a traffic jam of hundreds of ships. They tried to drag the vessel away in tugs and dig it out with a small excavator – it did not help. The exchange reacted sharply to the incident.

A huge container ship has paralyzed traffic in the Suez Canal, one of the world’s largest shipping routes connecting the Mediterranean and the Red Sea, Insider reported. Due to the resulting traffic jam, about a hundred ships have been unable to continue their journey for more than 13 hours.

The cargo ship Evergreen, 400 meters long (the maximum allowed to enter the Suez Canal) and 59 meters wide, carried hundreds of containers and sailed under the Panama flag from China to the Netherlands. In Egyptian waters, the ship ran aground due to a “gust of wind” that pushed it off course, the ship’s operator told AFP. According to the logistics company GAC, the ship was stuck due to a blackout.

According to the operator of the vessel Bernhard Schulte Shipmanagement, nothing threatens the crew, there have been no reports of injuries or pollution of the water area. According to the Vessel Finder, at the time of writing, the ship is still blocking the channel.

The Suez Canal, built in 1869, is one of the most important trade routes. About 10% of international merchant ships pass through it annually. In 2015, the Egyptian government completed a $ 8 billion reconstruction of the canal to ensure a smoother course of ships.

The resulting plug affected oil prices – the price of a barrel dropped below $ 60. According to the head of strategic firm ING, Warren Patterson, the effect will be temporary. Citizen Lab researcher John Scott-Railton also suggested that the situation could affect the delivery time of goods.