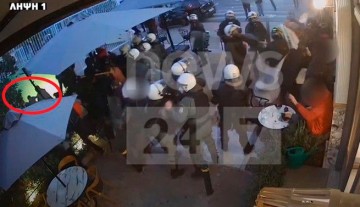 In an era when almost every passerby has a mobile phone with a camera, and the population has access to any social network, it is hard to expect that the next video will not be posted on the Internet at some point. There is not a single chance in a thousand.

In this material, we are talking about what actually happened on that November day in Galati and how exactly the Athenian police behaved towards citizens. There were no hooligans, swindlers or other types of criminals against them.

On Sunday, November 1, 2020, six days before the new national quarantine (7/11) went into effect, a group of demonstrators planned to gather in the Lambrini area of ​​Galati, but the police thwarted the demonstration with violence and tear gas. There were 13 reported arrests and injuries to protesters. The incident began in the vicinity of the cafeteria and then continued inside the establishment, in front of frightened customers who had previously drank coffee (measures such as the closure of the cafe were introduced six days later).

What the video shows

Residents and people working in the area who witnessed the incidents reported the baseless attack by the police. They stated that the MAT police indiscriminately beat people and used chemicals, despite the fact that there were families and small children at the scene. According to eyewitness testimony, there was a woman in the cafeteria with a 5-year-old child who fell into a chaos of violence during the dispersal of protesters, but the Greek police denied this.

The Greek newspaper NEWS 24/7 has published an exclusive video documentary showing, using three different shots, what actually happened in Galati on Sunday afternoon, November 1, as well as the truth about the presence of a five-year-old child and her mother at the time of the brutal police attack.

This video, as in the case that occurred in Nea Smyrni, appeared thanks to ordinary citizens, and was spread on social networks, which made it impossible to silence what happened.

The video above initially raises questions about why the protesters were surrounded by the MAT, both in front and outside the cafeteria, that is, in a place where the seats at the tables are occupied by visitors of all ages (their faces are hidden for obvious reasons).

At 0:36, the video (the corresponding photo follows) shows a man holding a child in his arms, trying to get out of the scene of the incident.

A little later, the video (2:08) shows a man and a woman running away with a baby carriage.

As you can see, the protesters go out into the street without any demand, and the customers of the cafeteria remain in their places, since until that moment everything seemed calm.

In the first shot, a police officer (0:28) can be seen from the underside of the sidewalk, running quickly and attacking the protesters, and a second later, his colleagues follow him. One of them sprayed the protesters with tear gas, despite the fact that (0:33) there are cafeteria customers who are hurrying to escape. At the same time, a simultaneous attack by the police is visible further, when the MAT fighters indiscriminately beat everyone with truncheons, causing panic among people, destroying the cafeteria, and also injuring the protesters, several of whom were taken to the hospital.

In some parts of the video, the brutality with which the police beat the protesters is evident, while relentlessly and mercilessly hitting the people who fell to the ground with their truncheons. While elsewhere, a police officer hit the man with his knee (2:24), despite the fact that his colleagues had already grabbed the protester and were holding him together.

Violence in front of a 5 year old girl

The documentary video, in the first two frames, captures the same scene of police violence that took place on the sidewalk in front of the cafeteria. At the same time, as can be seen from the third frame, in the cafeteria, in front of a 5-year-old girl, there is a chase and “blind” beatings by the police.

In the video, we see a frightened woman (evidence indicates that she is the mother of the child) looking for the entrance to the store’s toilet, followed by a little girl. (2:48)

The door does not open, the girl tries to “hide” behind her mother, and the two of them remain in the place where the protesters are running, trying to hide in the toilet. In front of the door, a crowd appears to “jam” for a few seconds, and then the police appear in the plan to rush to the protesters, beating them in front of the mother and a 5-year-old girl.

At the moment when the protesters start beating, a man is seen among the crowd and in front of the door (the information says that this is the girl’s father), who makes a characteristic hand gesture towards the police, showing them that there is a minor girl between them. (3:06). The door opens and most people enter the toilet, but it is clear that a police officer hits the protester in the head before being arrested. At that moment, the same man who explained the girl’s presence to the police comes out of the toilet, holding the baby in his arms, and leaves in front of the shocked mother.

EL.AS released a statement in which it spoke about the “attack of the protesters” and, children who reported discomfort

The day after the incidents, Greek police issued a statement rejecting allegations of an unprovoked attack on protesters, as well as those that said that the life of a 5-year-old child was endangered in the incident. She stated that “approximately two (2) hours after these incidents, it was reported that two minor children who at that time (that is, two hours later) were walking with their relatives across the square reported discomfort in their throat.”

Regarding the incidents with the protesters, the police noted that “the majority of those present had their facial features hidden and they brought various items suitable for violence, in particular wooden and metal batons. The police, who repeatedly and persistently came to the scene, pointed out to the assembled people about the risk of violating public safety and preventing the spread of COVID-19. The protesters refused to leave, and then some of them went threateningly towards the police, attacking them with truncheons and using tables and chairs from a nearby restaurant. “

Last week, March 16, the Ministry of Citizens’ Protection included the incident in a statement entitled “List of 26 incidents of police violence leaked with lies, inaccuracies, fake news, half-truths and slander by SYRIZA-owned media”:

“Lies: During a raid on a cafeteria, MAT men sprayed tear gas on a five-year-old child and his mother.

Truth: in Ag. Andrea gathered 50 people in hoods, with wooden and metal batons. The police tried several times to convince the crowd to leave in order to avoid the spread of the coronavirus. The demonstrators refused and attacked the police using, in addition to batons, tables and chairs from the cafeteria. Three police officers were injured in the attacks. 13 people were detained. During the incidents, the police once used tear gas. Two hours after the episodes, it became known that two minor children were walking nearby with relatives (i.e., 2 hours after the use of tear gas), who complained of a sore throat. So there was no attack on the children. “

NEWS 24/7 video confirms the complaints of employees and residents of the area, refuting the claims of EL.AS.

The video “Attacking the Police Using Batons, Tables and Chairs from the Restaurant” did not show a single moment of the protesters’ attacks on police officers. Instead, protesters are seen falling onto tables and chairs due to repeated beatings by the police, and clients hurry away to avoid the risk of being accidentally hit.

At the same time, you can see a frightened child who found himself in the crowd among the protesters and bystanders who had nothing to do with the protesters. And children clearly do not belong to the persons “passing through the square in two hours.”

The situation with police arbitrariness on November 1 in Galati occurred before the tightening of the isolation regime in the country, but became the first sign of what later turned into a serious episode of violence in Nea Smyrni…

There were reports of police violence in other parts of the country, such as Ioannina… Similar incidents followed a few days later, on anniversary the murder of Alexis Grigoropoulos, and while there have been many complaints of excessive police violence during rallies and pickets hunger strike protests Dimitris Koufodinas, where there were cases of beatings and violence against photojournalists…

However, police brutality reached a climax in March, during police attacks on civilians in the Nea Smyrni square and in the subsequent events Tuesday 9 March…

The common denominator of all the aforementioned events, constituting a tense period with many recurring incidents of uniform violence, most of which were characterized as “sporadic” by the Greek police and the Ministry of Citizens’ Protection.

In many cases, the statements have been refuted facts and images that were circulated on the Interneta prime example of which is Nea Smyrni, where statements by the Greek police referred to an “unprovoked attack by 30 people” on Sunday 7 March. But, as it turned out, everything was the other way around.

There are many questions in relation to the police, and these must be answered by the competent authorities.