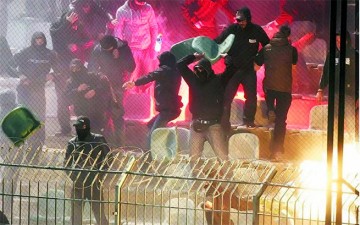 Authorities have drawn attention to the actions of fan club members following the March 9 violence episodes in Nea Smyrni in which they took an active part.

3000 soccer fans Attica take part in clashes and attacks on the police. This data appears in the reports of the Sub-Directorate for Combating Violence at Sports Venues (ΥΑΒΑΧ), which have been leaked to the media. Their activities were again drawn attention after the incidents of March 9 in Nea Smyrni, in which they took an active part.

An Attica security officer, on condition of anonymity, explained to Katimerini reporters that the number of organized football fans in the Attica metropolitan area is estimated at 5,000 in total.

“These are the ones who are constantly involved in the activities of their clubs,” he says. However, 3000 of them are “high risk fans” (ultras) or high risk hooligans, as they are called in international terminology.

These are people who arrange incidents on the field, participate in clashes with fans of opposing teams, as well as with the police.

Most of them are between 20 and 30 years old, but up to 20% are minors. It is characteristic that out of the 16 arrested in the episodes of “Nea Smirni” 7 people were under the age of 18.

In addition to the three big teams of Attica (Olympiacos, Panathinaikos, AEK), according to EL.AS, the teams of Atromitos, Panionios and Egaleo also have fan teams.

Mass fight between AEK and Olympiacos fans in 2019

In fact, the latter, although their number does not exceed 150 people, are described by the heads of the security service as particularly tough. Characteristically, in September 2019, they initiated serious incidents in the away Cup match with the Ξενοφών Κρεστένων team, and a few weeks later they did the same after the end of the match in Trikala.

Many of the 3,000 registered bullies maintain contact with anarchists. Organized fans of Panionios turned to the call to participate in the gathering on March 9 in Nea Smyrni, and anarchists from all over Attica and ultras from three large teams of Attica and Atromitos answered it.

The latter even made a potential “gift” at a rally against police violence, which was repeated over the weekend in the central square of Peristeri. Recently, ΥΑΒΑΧ and other police services have noticed what they call “anarchist and hooligan ossification”, which they associate with the difficulty of anarchists in attracting new active people.

Cases of violence by ultras are most often recorded in areas of West Attica, Peristeri, Kamatero, Ilion, as well as in areas on the border with Piraeus, such as Nikaya and Koridallos.

The incident between AEK and Olympiacos

In April 2019, five fans of the Greek club AEK were hospitalized with serious injuries after attacks by Olympiacos fans who burned their opponents’ car.

In the same areas, they are involved in juvenile gangs, whose members have contacts and access to organized fan clubs.

At the same time, the police record that persons who have been brought in for violations of sports legislation are also accused of drug trafficking, petty theft and blackmail.

The pandemic and the absence of fans in the stands of the stadiums did not in any way affect the actions of the hooligans. For example, in 2019, the Sports Venue Violence Authority identified and arrested 75 people for violating sports laws. In 2020, respectively, at the height of quarantine, the number of arrests and arrests reached 73.

Contrary to what might be expected, there has been an increase in violence and attacks. Typical evidence is three attacks with improvised incendiary devices on three groups of organized fans in Kipseli, Galatsi and Marusi, between January and February.