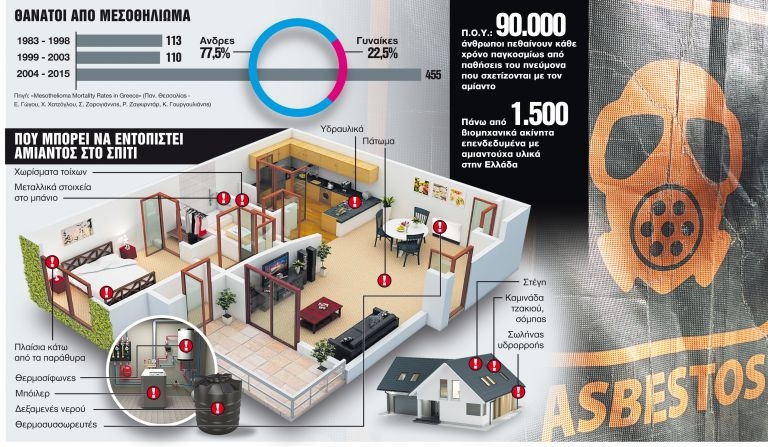 Experts describe the amount of asbestos hidden in the country’s building stock as a “time bomb” whose fuse is still burning, even 17 years after the European Union issued a directive to permanently ban the sale and use of all types of carcinogenic material (widely used as insulating).

According to scientists, asbestos is especially harmful and insidious, since the symptoms of the disease in humans appear after 15-20 years. In particular, inhalation of asbestos fibers can cause asbestosis (inflammation of the lungs), lung cancer, and malignant mesothelioma.

Its carcinogenic effect is known because it is associated with one and only type of deadly cancer, mesothelioma, for which no other carcinogen is responsible. Its microscopic structure is thin, needle-like fibers that pierce the walls of the lung, forming plaques in the pleura (the membrane that covers the lung inside the chest cavity). After inhalation, these fibers are not excreted, and the body is not able to remove (or process) them. Thus, they remain “stuck” in the respiratory system, where they have an inflammatory and carcinogenic effect.

According to Panagiotis Behrakis, pulmonologist and director of the American College Institute of Public Health, even the smallest dose of asbestos can cause disease. “There are hundreds of thousands of tons of asbestos in Greek buildings,” he stressed. The pulmonologist was appointed head of the Greek Asbestos Commission about 25 years ago, but his work proved to be short-lived because, he claims, no government was seriously interested in this issue, and cases and data were not recorded.

The figures show a significant increase in deaths

The first in-depth and so far unique study spanning 32 years (1983-2015) was conducted by the University of Thessaly, which documented a significant increase in mortality from malignant mesothelioma, a cancer caused by asbestos. In particular, for twenty years, from 1983 to 2003, 223 people died, and for the period from 2004 to 2015, 455 deaths were recorded. Another very important parameter of the study was the mortality rate for each geographical region of Greece for the period from 2004 to 2015. The highest level was found in Central Greece, including Attica, followed by Epirus, Peloponnese, Macedonia and Thrace, Crete and Thessaly. According to the same data, mostly men died from mesothelioma, with an overwhelming percentage of 77.5%, while the largest percentage of deaths occurred in the last 15 years.

In this context, Konstantinos Gurgoulianis, professor of pulmonology at the University of Thessaly Faculty of Medicine and one of the researchers, notes that “this increase is partly due to improvements in diagnostic methods, which led to the discovery of cases that in the past they could not be diagnosed. In addition, the increased amount may be due to the fact that the consequences of the use of asbestos are now visible. And this is because the disease manifests itself after a few years. And he adds: “In our hospital alone, there are two or three cases of mesothelioma a year.”

Data provided by Athanasios Davelos, Occupational Health Physician and Secretary General of the Hellenic Society of Occupational and Environmental Medicine, on risk factors for lung cancer (relative to the general population):

To understand the severity of the threat, one need only look at the data, which shows that around 125 million people in the world are currently exposed to asbestos in their workplaces. WHO estimates that more than 90,000 people die every year from asbestos-related lung cancer, mesothelioma and asbestosis as a result of occupational exposure. It is estimated that one in three occupational cancer deaths is due to asbestos, and it is estimated that many thousands of deaths each year may be attributable to residential exposure to asbestos.

At the same time, the global incidence of mesothelioma has steadily increased over the past decade and is projected to peak in the current decade. Precise numbers are difficult to determine, as the disease is likely to go unreported in low-incidence areas. However, one estimate puts an average of 14,200 cases worldwide each year.

The problem both in our country and in the world was exacerbated by the fact that asbestos ban came too late. That is, although the carcinogenic effect of asbestos in the world has been known since the mid-twentieth century, a complete ban was significantly postponed under strong pressure from the “lobby” of companies that produced and sold asbestos materials, as a result of which the use continued, despite the fact that a large number of asbestos materials were known. danger.

At the end of the 20th century, asbestos was used in more than 3,000 products (textiles, ropes, paper, insulating materials, filter membranes, protective clothing, theater curtains, protective tapestries, in electrical engineering, insulating pipes, furnaces, boilers, in the navy). However, it was mainly used forproduction of asbestos-cement products and due to its thermal insulation properties. Thus, even today it is hidden in building materials (ceiling and floor tiles, pipes, electrical and thermal insulation), in household appliances (electric irons, hair dryers) and in the automotive industry (brakes, clutches).

The need for checks

In terms of what has been done since 2005 and the final ban on asbestos until today, it is estimated that initiatives have been taken to remove asbestos from most public and industrial buildings, but the economic crisis has put the whole process on hold. 2035 is a significant year in terms of the complete “disappearance” of asbestos, based on the relevant European directive.

Electrical engineer Nikos Kleisiotis points out: “We all understand that much more needs to be done before we can finally eliminate asbestos, given that Greece was the seventh producing country in the world and carried out countless exports and trades in asbestos materials in those years. . The most important, checks for the presence of asbestos should be carried out. It’s like going to a doctor and telling him to cure you without doing any tests.

Most people avoid signing up for asbestos inspections because they fear that if found (which is very likely in buildings built before 2005), they will have to pay to remove the material. According to the expert, the creation of subsidy programs would help in this direction. However, there is an optimistic conclusion that if the legislation is implemented and one takes the issue seriously, then the risk factors for developing serious asbestos-related diseases can be reduced. On the other hand, the consequences of using material from previous generations will worry us for many years to come.