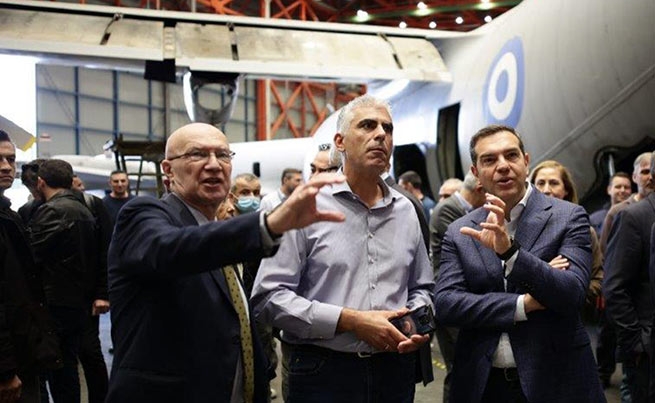 “Greece has signed arms programs worth more than 14 billion euros over the past two years, but has not provided a single euro to the national defense industry,” Alexis Tsipras, leader of the SYRIZA-Progressive Alliance, said on Monday, calling it a “national crime.”

Tsipras made his announcement after meeting with the administration and staff of the Hellenic Aerospace Industry (EAV) at its premises in Schimatari in central Greece. The leader of the main opposition expressed satisfaction that the two weapons programs his government had signed up for were still active, namely the upgrade of 84 F-16s into Vipers and the upgrade of 4 P3 maritime cooperation aircraft.

Greece will always need to keep its military on deterrence readiness and “it is inconceivable that its defensive weapons industry is not strengthened, especially since its discrediting is a political choice,” Tsipras said. As soon as SYRIZA returns to power, he said, she will revise the agreements so that the Greek industry participates in new programs.

“We also see the need for a new institutional structure that will empower the navy’s air defense forces and all defense industry companies. Opportunities for market-based flexibility, but also support for workers.”

Employees told the SYRIZA leader that EAB could produce the Super Puma at a fraction of the cost and take over C130 maintenance projects. Another issue they raised was the lack of hiring of permanent staff since 2008-2009, since the salary is between 600 and 700 euros per month, and for this money it is impossible to hire normal specialists.

Speaking about what steps he will take when he becomes the head of the ruling party, Tsipras emphasized the following: “We are planning to create a special government ministry and a general secretariat to oversee the military industry. And at the same time, we believe that workers cannot be here We need to support the defense industry, the ability of the country to save resources from weapons programs – many of them are needed – because otherwise it will not be able to be competitive. Because we must have a strong deterrent in the armed forces, but At the same time, we must maintain the ability not to go beyond our budget, not to waste resources that are extremely useful for the national economy.