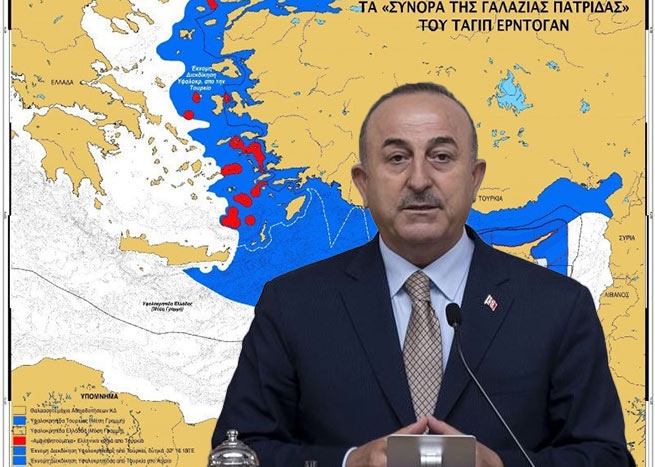 Turkish Foreign Minister Mevlut Cavusoglu on Wednesday warned Greece against expanding its territorial waters in the Aegean Sea. Ankara “will not accept the fait accompli that has left Turkey trapped on its coast,” he stressed.

“We will not allow [Греции] expand its territorial waters in the Aegean by not one mile more than 6 miles,” he added.

In the mid-90s, the Turkish parliament passed a law according to which Ankara will consider casus belli (cause of war) if Athens expands its territorial waters in the Aegean Sea. Since then, the law has not been changed or repealed, even in the rosy times in Greek-Turkish relations. Athens hinted last month that it is considering expanding its territorial waters south of Crete from 6 to 12 nautical miles. Cavusoglu responded by accusing Greece of being “dishonesty” and “insincerity” over disputes in the Aegean and the eastern Mediterranean, adding, that Athens “stands in the way of justice”.

He also referred to supposedly Greek plans to attack Turkey, adding that “Athens has lost her mind.” “Greeks know what it means to come face to face with Turkey. We want dialogue, but Greece must be sincere,” he said. Cavusoglu stated that Athens is targeting Ankara with “fake news”, adding that “[греческая] propaganda failed.

It is worth noting that the declaration of 12-mile territorial waters in the case of the Greek islands bordering the Turkish mainland is in many ways provocative. The reason is that often the distance between the Greek islands and the mainland is no more than 1.8 kilometers (1 nautical mile), and sometimes less. As, for example, in the case of the Greek island of Samos and the mainland, where the distance is 1.7 km. And there are at least a few such places. The introduction of the 12-mile zone will completely block sea routes in most cases where the islands of the Aegean and Mediterranean seas are located near the Turkish coast.

The parties could agree, but, apparently, politicians prefer to stir up tensions. Naturally, it is more profitable for them than to look for common ground. The only question is: is it beneficial for the peoples of Greece and Turkey?