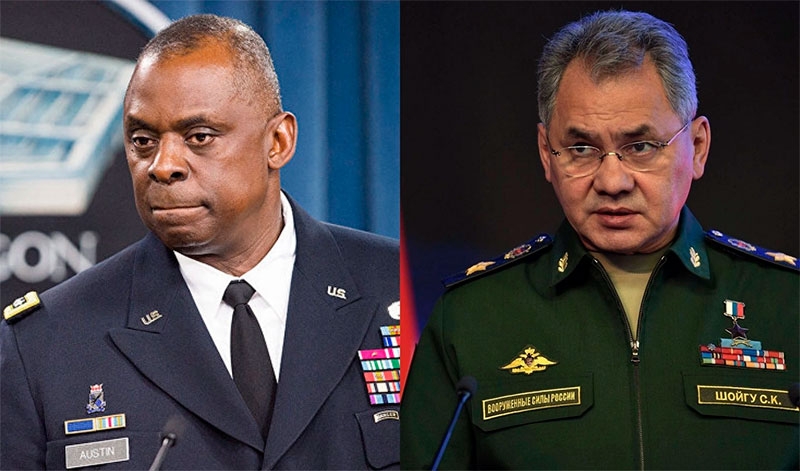 The situation in Eastern Europe is becoming alarmingly dangerous after reports from Moscow that Kyiv is preparing a provocation in Ukraine using the so-called “dirty bomb”, that is, a bomb with radioactive materials but with a conventional charge.

The Russian defense minister today reportedly issued a final warning to the United States in very harsh tones that the situation in Ukraine is spinning out of control as Kyiv plans a radioactive strike.

According to the Russian Ministry of Defense, the Russian minister had another telephone conversation with his American counterpart Lloyd Austin, the second in the last three days.

Moscow did not provide more details about the content of the conversation, but it did touch on Kyiv’s adventurism and how dangerous it is to world peace.

Earlier, Shoigu held telephone conversations with French Minister of the Armed Forces Sebastien Le Cornin and his Turkish counterparts Hulusi Akar and Ben Wallace from the UK on the war in Ukraine, the Russian Defense Ministry said.

For the Russian defense minister, this is a very intense one-day talk for the first time since the start of the Russian offensive in late February.

A warplane crashes into a residential building in Russia’s Siberia, killing its two pilots pic.twitter.com/SitWNANlSG

In a conversation with Sebastien Lecorny, the Russian Defense Minister expressed dissatisfaction with the situation in Ukraine, “where there is a tendency towards uncontrolled escalation,” the same statement said.

He also cited, as did his colleagues Hulusi Akar and Ben Wallace, Russian “concerns about possible provocative actions by Ukraine through the use of a dirty bomb.”

A “dirty bomb” is a so-called low-yield nuclear weapon filled with radioactive materials in combination with conventional explosives. When such a bomb is detonated, the radioactive substance is sprayed by a shock wave over a large area.

The French Ministry of Defense, in a statement, confirmed the reference to “Russian concerns” about the “dirty bomb strike by Ukrainians on their territory to blame Russia.”

Sebastien Le Cornin recalled that “France rejects any form of escalation, especially nuclear”, also stressing France’s determination “to contribute to the peaceful resolution of the conflict together with its allies.”

In turn, the chairman of the Committee on International Affairs of the State Duma, Leonid Slutsky, today accused the head of the Kyiv regime, V. Zelensky, of trying to push the West into a world war, trying to involve NATO on the ground in a war with Russia.

The fact that the Ukrainian authorities planned a provocation with the explosion of a “dirty bomb” on the territory of the country was previously reported by the Russian state agency RIA Novosti. Sources abroad told the agency that Kyiv hopes to launch a powerful anti-Russian campaign aimed at undermining confidence in Moscow.

The head of the Ministry of Foreign Affairs (MFA) of Ukraine, Dmitry Kuleba, said that Kyiv does not plan to detonate a “dirty bomb” to provoke Russia. The Minister spoke about this on his Twitter.

Russian lies about Ukraine allegedly planning to use a ‘dirty bomb’ are as absurd as they are dangerous. Firstly, Ukraine is a committed NPT member: we neither have any ‘dirty bombs’, nor plan to acquire any. Secondly, Russians often accuse others of what they plan themselves.

The Russian lie that Ukraine is planning to use a “dirty bomb” is as absurd as it is dangerous. First, Ukraine is a committed party to the NPT (Nuclear Non-Proliferation Treaty): we do not have “dirty bombs” and we are not going to acquire them. Second, Russians often blame others for what they themselves plan.

It should be noted that the issue of using a row bomb was raised in Ukraine shortly before the start of the Russian-Ukrainian war by Zelensky sounded the threat of using a “dirty bomb” Later, the President of Ukraine tried to justify himself, stating that he was misunderstood, but the word had already been said…