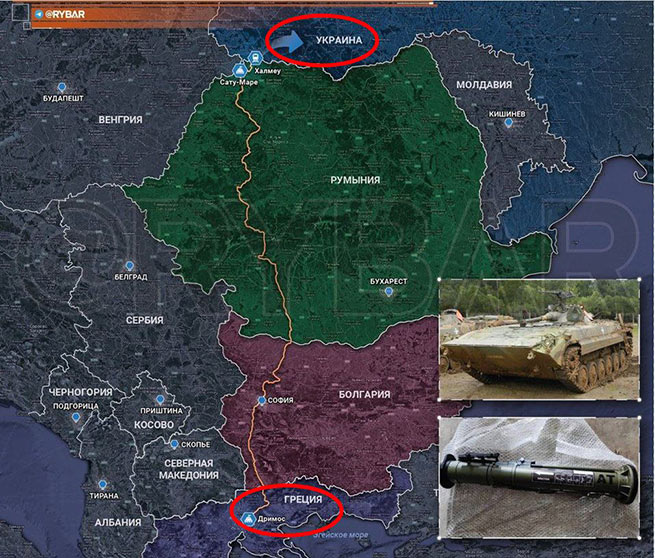 The second batch of Greek BMP-1s, which left the islands of the Aegean Sea, arrived in Ukraine as part of their exchange with the German Marder BMPs, which will be deployed in … Evros, the TG channel AVIAPRO reports, showing on the map the route they follow from Thessaloniki through Bulgaria, with an intermediate destination in Romania, and end up on the territory of Ukraine.

So over the past 24 hours, 4 BMP-2s, 20 BMP-1s and 6 tanks have arrived in Ukraine, writes a Russian publication that analyzes where the armored vehicles come from because it wants to show which countries are hostile to Moscow.

According to the Russian publication Avia.pro, 20 Greek BMP-1 infantry fighting vehicles crossed the border with Romania and Ukraine at night. As noted, they arrived in Romania, and then were reloaded onto Ukrainian vehicles to be sent to the next bases.

The report states that another piece of military equipment and military trucks arrived in Ukraine from the Czech Republic via neighboring Poland. We are talking about 6 T-72M4 tanks, 4 BMP-2s and many army trucks and tractors. The supply of a fairly large number of weapons shows that the West continues to actively send weapons and equipment to Kyiv, despite the statements of European countries that they are in favor of a speedy end to the conflict.