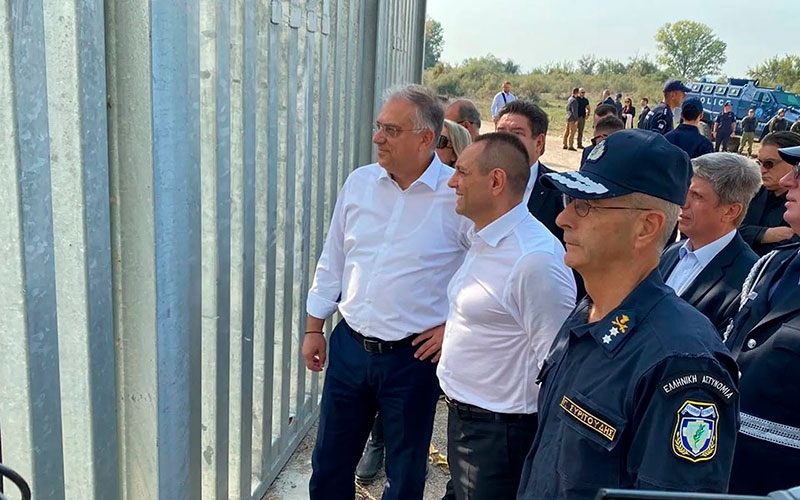 The Minister for the Protection of Citizens of Greece said today that illegal immigration is a common problem for all countries of the European Union.

Citizens’ Protection Minister Takis Theodorikakos met today in Alexandroupoli with Serbian Interior Minister Aleksander Vulin. During the talks, the strong ties of friendship and cooperation between the two countries were reaffirmed, and the issue of illegal migration flows using Turkey’s unfortunate people was discussed in detail. The ministers agreed to cooperate in combating smuggling networks, emphasizing that the problem of migration is not a problem of Greece and Serbia, but of the whole of Europe.

Vulin asked Theodorikakos to convey to Prime Minister Kyriakos Mitsotakis the gratitude of Serbian President Aleksandar Vučić for his position at the European summit in Prague, as well as for Greece’s firm position on Kosovo. The two ministers signed an agreement on mixed patrols in the tourist areas of the two countries in the presence of Secretary General for Public Order Mihail Karamalaki, Greek and Serbian high-ranking policemen.

The last stop was the fence at Feres. There Theodorikakis informed his colleague from Sevos about the extension of the fence along the entire length of the Evros River and the Akritas project.

“We are building a strong European front against illegal immigration”
Today, both ministers stressed that illegal migration is a common problem for all countries of the European Union, the Balkans and the South Eastern Mediterranean.

“The problem of illegal migration, the instrumentalization of unfortunate people, migrants from Turkey is a challenge not only for Greece. It is a challenge for all civilized people, for all European countries and, of course, for our neighbors in the Balkans and in the South-Eastern Mediterranean,” Theodorikakos said. He emphasized that Greece and Serbia are joining forces, strengthening cooperation between themselves, police cooperation to jointly fight against “criminal traffickers of illegal migrants”, noting that already in 2022 more than 1,100 traffickers in human beings were arrested in Greece, “who are now in hands of Greek justice and will suffer the punishment they deserve.”

“We are doing everything necessary to put an end to illegal immigration, to effectively guard the borders of our country, which are also borders EUthe borders of the Western world, the world of civilization, democracy and freedom against Turkey,” he said.

The Minister of Civil Defense also mentioned the summit, where, in his words, “the whole of Europe saw in Prague this week who complies with the principles of international law, who respects international legality, who acts in a balanced and reasonable manner, and who has gone off the rails and violates the rule of law and good neighborly relations with extreme rhetoric”. Adding that “Greece’s main position, as a country defending stability and peace in the region, is to join the Western Balkans to the European Union, including Serbia, with which we have excellent relations.”

Referring to today’s signing of an agreement between Serbia and Greece on joint patrols by the police authorities of the two countries during the tourist season, Theodorikakos said that it will be developed “with the aim of consolidating and strengthening this sense of security for the citizens of both countries when they visit the homeland of another country.”

Vulin said that illegal migration is an issue that puts pressure on both countries, noting that Serbia opposes instrumentalizing migrants and using them as a means of pressure on the country, especially Greece, and exploiting them for political purposes.

He emphasized that they (migration flows) are not about a humanitarian crisis, but about “organized gangs”, whose activities began in 2015 with illegal trafficking in people, weapons and drugs, and they pose a threat to both Greece and Serbia, where, according to him, several armed gangs were arrested.

He expressed the opinion that the EU is obliged to take a common decision on illegal immigration, “no country associated with migration flows, not to mention Greece, should be left alone.” If the European Union considers that this is a humanitarian crisis, then let it take such steps that these people can legally enter its countries. If he believes that this is not a humanitarian crisis, if he shares Serbia’s position that it is about organized gangs, then we should treat any illegal transfer as a criminal offence. Until that happens, we will continue to fight together.

Speaking about the signing of an agreement between Greece and Serbia, on joint patrols by the police authorities of the two countries, he explained that Serbian citizens feel completely safe in Greece, and this agreement is “a way to help our Greek colleagues, as well as send a signal to our citizens that where they are safe.”

Vulin highlighted the support that Greece gives to the territorial integrity and national sovereignty of Serbia, as well as the special support of the Greek people, “a truly brotherly people.”

Vulin concluded by saying that during today’s meeting he had the opportunity to convey President Vučić’s gratitude to Greek Prime Minister Kyriakos Mitsotakis for his statement in favor of Serbia to EU leaders at the Prague summit.