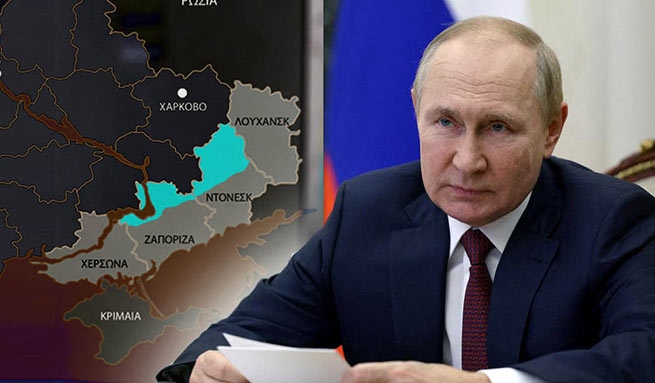 In the St. George’s Hall of the Kremlin, the signing of agreements on joining the Donetsk and Lugansk People’s Republics, Kherson and Zaporozhye regions into Russia took place. The ceremony was preceded by a speech by Russian President Vladimir Putin. It lasted 38 minutes. The head of state thanked the residents of these regions for their choice made in the referendums and assured that Russia would never betray its people. Putin also condemned the policy of Western countries at the head of the United States and promised that the Russian Federation would defend its territory and citizens with all available means.

“Referendums were held in the Donetsk and Lugansk People’s Republics, Zaporozhye and Kherson regions. Their results have been summed up, the results are known. People have made their choice, an unequivocal choice… This is the will of millions of people. And this, of course, is their right, their inalienable right, which is enshrined in Article 1 of the UN Charter, which expressly states the principle of equal rights and self-determination of peoples.

About the future of new territories

“People in Donetsk, Luhansk, Kherson and Zaporizhzhya become our citizens. Forever! We will definitely rebuild the destroyed cities and towns, housing, schools, hospitals, theaters and museums. We will restore and develop industrial enterprises, infrastructure, social and pension security, healthcare and education. We will protect our land with all the means at our disposal, we will do everything to ensure the safety of our people. This is the great liberation mission of our people”

On negotiations with Kyiv

“We call on the Kyiv regime to immediately cease fire, all hostilities, the war that it unleashed back in 2014, and return to the negotiating table. We are ready for this, it has been said more than once. But the choice of the peoples in Donetsk, Lugansk, Zaporozhye and Kherson will not be discussed – it is done, and Russia will not betray it. Today’s Kyiv authorities should treat this free will of the people with respect and nothing else. This is the only way to peace.”

About the Nord Stream Incident

“The Anglo-Saxons have few sanctions. They switched to sabotage – unbelievable, but true – by organizing explosions on the international gas pipelines of the Nord Stream, which run along the bottom of the Baltic Sea, they actually began to destroy the pan-European energy infrastructure.”

On confrontation with the West

“The West is ready to step over everything in order to preserve the neo-colonial system that allows it to plunder the world at the expense of the power of the dollar and technological dictates … They are simply haunted that there is such a great huge country in the world, with its territory, natural wealth, resources, a people that does not have and will never live according to someone else’s orders… Claims for world domination in the past have been shattered more than once by the courage and resilience of our people, Russia will always be Russia, and we will defend both our values ​​and our Motherland. Russia is not needed, we need it.

On the probability of a new war

“Now, in order to get out of another tangle of contradictions, the Western elites need to break Russia, other states that choose the sovereign path of development, at all costs, in order to plunder other people’s wealth even more and at this expense close, plug their holes. If this is not happens, I do not rule out that they will try to completely bring the system to a collapse, on which everything can be blamed, or, God forbid, decide to use the well-known formula: “the war will write off everything.” Russia understands its responsibility to the world community and will do everything to bring such hotheads to their senses.”

About the nuclear precedent

“The United States is the only country in the world that has used nuclear weapons twice, destroying the Japanese cities of Hiroshima and Nagasaki. By the way, they have created a precedent.”

About the new world order

“Today we are fighting for a fair and free path, first of all, for ourselves, for Russia. For diktat, despotism to remain forever in the past. I am convinced that countries and peoples understand that a policy built on the exclusivity of anyone “, on the suppression of other cultures and peoples, is inherently criminal. That we must turn this shameful page. The collapse of Western hegemony that has begun is irreversible. And again, I repeat, as before, there will be no more.”