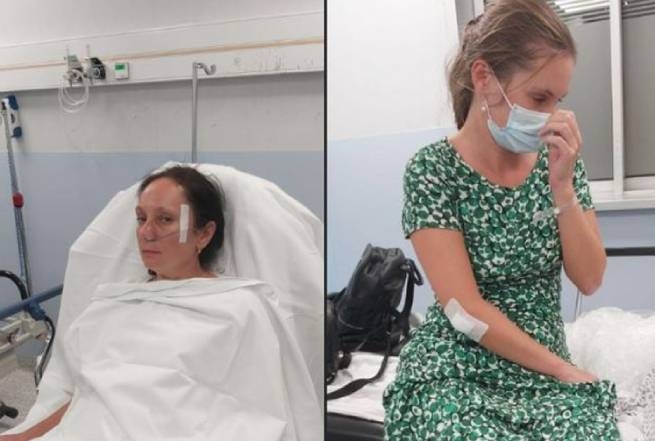 The Ukrainian Foreign Ministry said that the Ukrainian embassy in Paris took special control over the case of the beating of two Ukrainian women.

A mother and daughter who suffered in France, Ukrainian refugees, who were attacked and severely beaten by a Russian-speaking man on September 11, spoke about the details of what happened.

Edition Monaco-Matin writes that the victims – Alina and her mother Elena – are from Izyum, Kharkiv region, who left for France on April 19. They spent almost two months in Russian-occupied Izyum. To leave the city, the women had to go through filtering and interviews. They got to France through Russia. To get to Estonia, we drove through Valuev, Belgorod, Moscow, St. Petersburg, Ivangorod. They left Narva for France. The victim Alena says:

“It was very difficult to leave, they went through a lot. In France, they began to go to a psychiatrist, because the roof leaves the war.”

The doctor recommended Ukrainian women evening walks before going to bed, with which Alina and her mother returned that evening on September 11th. The girl says:

“4 people came towards us: two men, one very beefy, and the second one was tall and thin, and a woman with a child. And a friend from Ukraine sent me a satirical song “Without Rusny”, we walked and listened to it along the way.

The company had already passed by the women, when a man of strong physique exclaimed: “I’m from Kyiv?!” Alina notes that they spoke to each other in Russian with a Moscow accent, and continues:

“We didn’t understand what he wanted from us. We turned onto another street, and here this huge man catches up with us and just starts beating without any explanation.”

An unknown person punched her in the face, after which the girl fell on the asphalt, hit her head, and after the second blow she lost consciousness for a minute. Then the man began to beat her mother, the woman fell three times, her nose was broken. Later it turned out that there was a fracture. The man’s companions were not visible, and he struck silently. Alina recalls with horror:

“I think he was under some kind of drugs. He had red eyes, dilated pupils. I have never seen such an aggressive person, even in the occupation. He had a devilish expression on his face. Not a man, but just a beast.”

She suggests that the song that they listened to during a walk could anger the unknown. Having dealt with the women, the man also silently retreated. Alina called the police, and law enforcement officers and doctors arrived at the scene. However, the police have not been able to find the assailant so far. They promised to look at the CCTV footage, and then they might be able to find and identify the attacker.

Alina and her mother were taken to the hospital, given first aid and advised to contact specialized doctors. Doctors diagnosed Elena with a broken nose, and Alina with pain in her legs and head. The victims feel unwell, complain of dizziness and nausea, spend a lot of time in bed. Alina says:

“We hope that he will be found. People should know about such stories and be careful, because God forbid that this happened to someone else.”

The Ministry of Foreign Affairs of Ukraine reported that the case of the beating of Ukrainian women is under special control of the Ukrainian embassy in Paris. Foreign Ministry spokesman Oleg Nikolenko noted:

“Diplomats are cooperating with French law enforcement officers to promptly investigate the attack, keep in touch with the victims, who have received the necessary medical care. The attackers must be punished.”

Unfortunately, such cases are not isolated. In Turkey, for example, a drunken Russian tourist forced girls from Ukraine speak Russian, swore obscenely and humiliated them, and in Sweden, a Russian woman attacked a Ukrainian woman with insults, who made a remark to her about the handling of the flag of Ukraine.