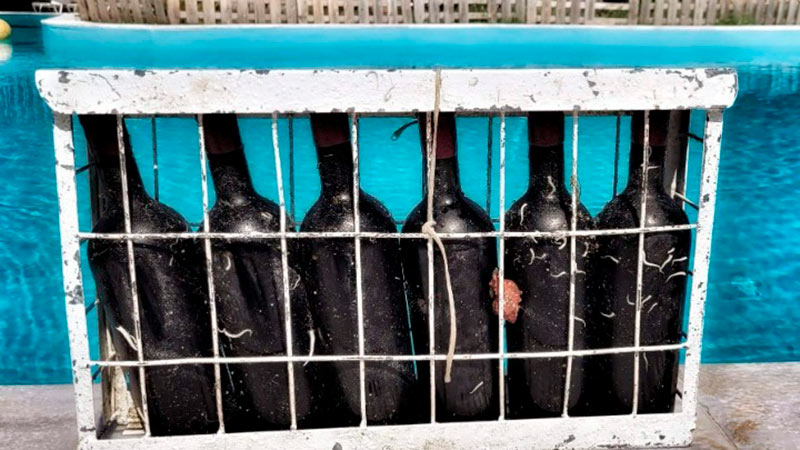 Wines aged in an underwater cellar at the bottom of the sea in Halkidiki have found their way to restaurant tables in Japan, where they are very popular. Sushi + Greek wine aged under water is a new trend in the country.

This second underwater batch that conquered the Japanese gained its popularity thanks to the most sensitive part of the bottle – the cork. When the people in charge of the Domaine Agrovision Underwater Cellar dipped the bottles into the water, they chose two types of stoppers: one with more permeability and one with less.

In conversation with news agency Amna Radio 104.9 FM Director of the Domaine Agrovision winery Angelos Zamanis explained how the process was technically carried out and how the sea finally got into the wine.

“Sodium chloride, that is, sea salt, passed from a large porous cork into the bottles, and the wine became a little salty. Acidity and salinity combined very well with white wines and gave a very interesting taste. Red wines, on the other hand, have retained their freshness and aroma thanks to the fruit, and it is on the bottom that the Japanese “sunk”. This makes sense because their food and eating habits are high in tuna and protein, so they are looking forward to the next delivery, they told us,” says Zamanis.

The bottles, patiently waiting in the underwater cellar among marine life, have changed not only in taste, but also in appearance. Shells, oysters and other “touches” of the marine population are glued to the bottles, decorating their appearance from the outside.
Ouranoupolis Scuba divers accompany underwater clients who have the opportunity to dive and choose their own bottle of wine. However, “if it’s difficult, you can order it and we’ll lift it ourselves,” explains Fomas Aslanidis, a diving team leader and owner of a hotel with which the underwater winery collaborates.
Initially, 150-200 bottles were placed in the underwater cellar. 100 were already pre-sold before they returned to shore. As a result, winemakers added more, as demand from individuals and businesses was high.

The idea of ​​an underwater wine cellar came to mind (more precisely, was borrowed from colleagues in the workshop) by a group of divers Ouranoupolis Scuba. Scuba divers with knowledge of the seabed and its features placed the bottles in special lattice boxes at a depth of 20 meters. “Divers also accompany clients who want to visit the underwater cellar,” said Fomas Aslanidis, diving team leader and hotel director who works with the winery.

Zamanis told reporters not only about the procedure of underwater aging, but also about underwater thieves. “There was an unprecedented incident: some time ago, four wine bottles were stolen at a depth of 20 meters,” Zamanis said. He added that without equipment, few people can reach such depth. And suspects that someone is snorkeling in the area, accidentally found them and decided to grab a few bottles for himself …

After this incident, the winery moved stocks to another underwater area and also placed a surveillance camera that will send out alarms as soon as any marine intruders approach the cellar.

Since last year, the underwater cellar has been impressing tourists in the Ierissos area. There were many who wanted to dive in order to choose their own bottle and taste the wine that “carries” the magic of the crystal clear sea near the shores of the legendary Athos.

In the meantime, the winery has come to an agreement with the University of Lemnos and the International University of Thessaloniki so that a laboratory analysis of the wine can be carried out and see how its chemical composition has changed.