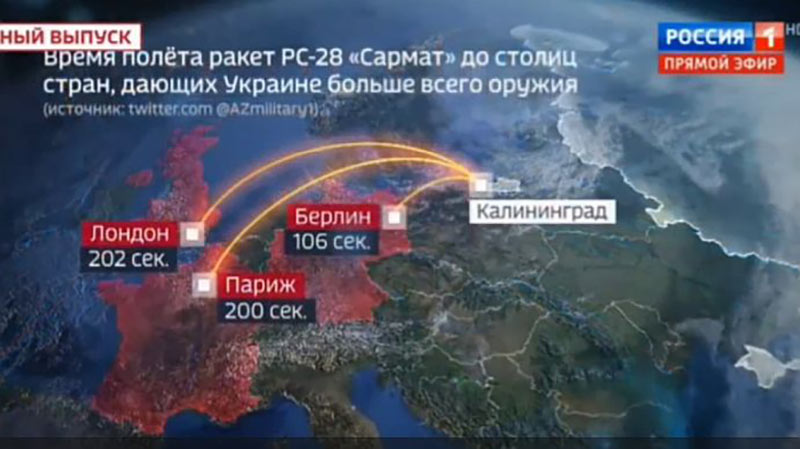 Peskov clarified that the situation is being analyzed “in the most serious way.” Moscow’s position is communicated to Vilnius through the Russian Foreign Ministry. According to Peskov, first of all, time is needed to make a decision to overcome Lithuania’s restrictions.

“There is no need to rush here, but at the same time, of course, we are determined enough. It takes a certain amount of time before decisions are made.”– said the press secretary of the President of Russia.

Peskov added that Russia is absolutely right on this issue.

BREAKING – Russian Foreign Ministry: NATO countries have declared themselves a nuclear alliance and are on the brink of an armed conflict with Russia.

Lithuania, a member of the European Union, began blocking the movement of Russian goods subject to sanctions last Saturday EUafter the entry into force of new restrictions, which for Russia is cause for war.

Moscow criticized the move, calling it an “exception” and promised a tough response.

On the same day, a State Duma deputy, Lieutenant General Andrey Gurulev, announced that the blockade of Kaliningrad would be the “cause of war” for Russia and that the first European capital to be defeated would be Great Britain.

On the air of the Russia 1 TV channel, presenter Olga Skabeeva and State Duma deputy from the LDPR faction Alexei Zhuravlev discussed how many seconds the Sarmat intercontinental ballistic missile would take from Kanliningrad to the capitals of Great Britain, Germany and France.

In particular, in an interview with the Russian First Channel, he, in particular, emphasized that “London will be the first city to be bombed in the event of World War III.”

He even added that for this “blockade” of Kaliningrad had to lead to a world war.

“We will destroy the entire grouping of enemy spacecraft during the first air operation,” Gurulev said.

“No one will care if they are American or British. “We will see them all as members of NATO » .

“Secondly, we will mitigate the entire missile defense system, everywhere and 100% and, thirdly, we will definitely not start from Warsaw, Paris or Berlin. However, the first blow will be against London.” he also pointed out, characteristically saying that this would happen because “it is clear that the threat to the world comes from the Anglo-Saxons.”

On the Lithuanian-Belarusian border, Russia must create a military group that can provide a corridor for supplying Kaliningrad, despite US warnings about supporting Vilnius and adherence to Article 5 of the Alliance Charter. This opinion was expressed on June 23 by a member of the State Duma Committee on Defense, Lieutenant-General Andrey Gurulev, stating that “those who wave this article, let them roll it up into a tube and stuff it somewhere.”

The European Union decided to back down

The blockade of the Kaliningrad region, introduced by Lithuania on the basis of anti-Russian sanctions adopted by Brussels, is apparently coming to an end. The European Union is ready to remove it. This is how one can interpret the words of the European Commissioner for Foreign Policy, Josep Borrell, that the wording of the sanctions (which allowed Lithuania to restrict the import of almost 50% of the range of goods into the Russian enclave through its territory) will be revised.

“We want to introduce measures that will allow us to prevent any form of violation of sanctions – but at the same time not interfere with the transportation (of people and goods from the rest of Russia to Kaliningrad – editorial note). Therefore, the European Commission and the External Relations Service of the European Union are going to revise the sanctions instructions in order to clearly show that we are not going to block or prevent traffic between Russia (meaning the rest of Russia – approx. VIEW) and Kaliningrad, – declared Mr Borrell. “We have two goals: to prevent the circumvention of sanctions and not to block traffic. Both of these goals can be achieved at the same time, and we are working on it.”

This revision, according to the European Commissioner, will be completed “as soon as possible.” Apparently, we will talk about what the governor of the Kaliningrad region Anton Alikhanov spoke about earlier: the European Union will separate the concept of the transfer of Russian goods to Europe through Kaliningrad and the transit of goods that go from Russia to Russia for consumption in Russia (that is, in Kaliningrad).