Regular bus Κ.Τ.Ε.Λ. in the city of Thessaloniki in northern Greece caught fire while driving in the area of ​​Agios Athanassios in the municipality of Chalcedon on Saturday. The driver and passengers managed to leave the bus, there were no injuries.

By the time firefighters arrived on the scene, only the charred remains of the bus remained. The fire broke out shortly before 12 noon at a bus stop near a local high school.

Details about the cause of the fire are not yet available.

This is not the first burnt bus in Greece. Such incidents happen at least a few times a year. For example: in the same place, in Thessaloniki, last year ΚΤΕΛ bus caught fire trouble from Martinos, Phthiotis (Μαρτίνο Φθιώτιδας). 12 firefighters in six specialized vehicles rushed to the scene.

Forty-eight passengers and the driver also managed to escape the burning vehicle, but, as in the recent case, the bus was completely destroyed along with the belongings of the travelers. Only a few suitcases were pulled out of the fire. The passengers, who got into trouble, spent some time in the pouring rain, waiting for another bus from Lamia, which took them to Thessaloniki. 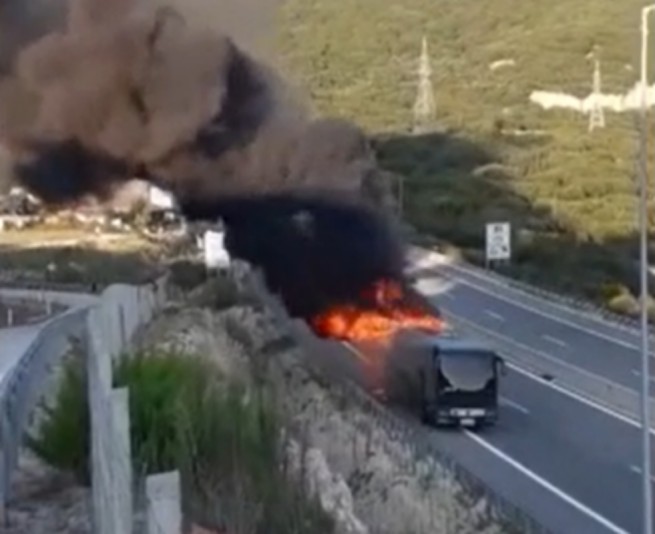 In the same place, in Northern Greece, last August KTEL bus caught firewith 39 passengers. The incident took place on Ionia Odos. Witnesses of the incident managed to capture shocking footage on video. The bus operated a flight on the route Ioannina-Athens. While driving along the highway, at the height of Gorgomilos, the engine of the vehicle caught fire.