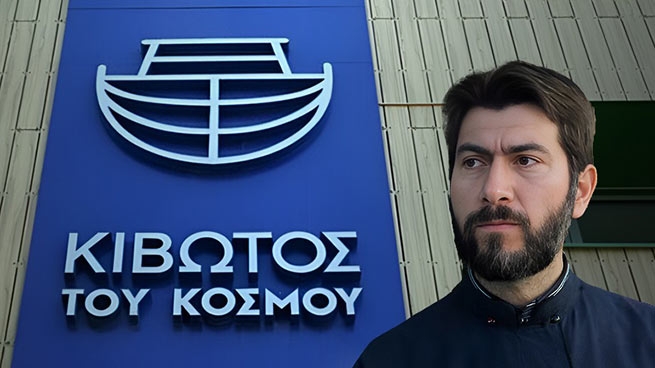 Details about the cruises that Father Antonios made with the boys living in the NGO “Ark of Peace” (“Κιβωτός του Κόσμου”), were told by the uncle of the 19-year-old former guest of the structure.

According to him, Father Antonios himself chose which children would accompany him on these cruises, and most of them were boys.” He studied at the university, and since he spent time in the country, he says: “Hey, what are you going to do there , sit here, I will give you a scholarship to the Faculty of Fine Arts, you will be engaged in icon painting in churches. Why do you want to run around the provinces now? … and in the end he didn’t get him anywhere and forced him to work as a storekeeper,” says the uncle of the young man, referring to what Father Anthony told his nephew.

He also describes a case in which, during the Christmas period, NGO workers did not allow the children’s relatives to visit them under the pretext of punishment. “We asked them:” Christmas punishment?

Mina Spiropoulou-Karelia, the widow of tobacco manufacturer Konstantinos Karelia, spoke about her donation to the Ark of Peace and the attitude of Father Antonios. In 2018, along with her daughter Joanna, she decided to donate a 32-acre plot of land with two properties in Kalamata to the Peace Ark. She told iefimerida.gr: “We donated our house to the Ark of Peace because we believed that there would be state and church oversight.”

“We decided to make this donation to the Ark and started to rebuild the first house to be suitable for children. We built teachers’ offices, a computer room, a large dining room, a games room, a large kitchen, a fire extinguishing system, etc.,” commented Spiropoulou-Karelia, who then referred to the attitude shown by Father Anthony and his wife during their work:

“I couldn’t even get through to them to consult on technical issues at home. Until one day the elder called me because she was in charge and asked me to build an ancient theater on the site. I explained to her that we were creating a space for children, and in the city has a spiritual center and also a castle if they want to take them.Then she hung up.I thought the line was cut off and called back, but their driver answered (because they have children who grew up in structures as drivers) and said that she could not talk to me because she was busy.Since I did not like this behavior at all, I spoke to my lawyer and we demanded the return of the property.They, of course, did not give it, because we did not think about that the deed of gift would contain such a condition. Then – even before obtaining permits – they brought the first children to Kalamata so as not to lose the house. “

Another fact that impressed Mrs. Mina Spiropoulou-Karelia is that when last Christmas she decided to offer clothes and shoes to the children in the amount of 10,000 euros, the heads of the structure asked her for size 45 shoes! “I sent them money for clothes and shoes, asking them how many children were there and what size the clothes and shoes were. Of this amount, they spent only 3,800 euros. When I found out about this, I asked for the rest of the money to be returned to me, which was done. In shoe sizes, they also asked for size 45 and I told them which child wears size 45. They told us they would accept children from 5 to 15 years old, girls and boys, but they only brought boys. Then they told me that they also have older children,” said Ms. Spiropoulu-Karelia. She concluded by asking: “Let the state see to it that they are supervised and that the children continue to live there. lost in vain, if, of course, this turns out to be so.

As it became known on Monday, the Archdiocese of Athens dissociated itself from the Ark of Peace NGO, saying that this organization had nothing to do with the Church of Greece. Then the question is for the authorities, and who registered this organization and monitored its activities, will they be held accountable or as usual?