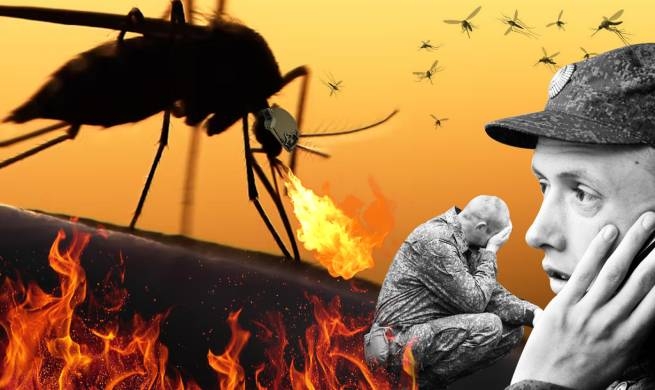 “These insects are killing more people every day than sharks have killed in a century.” The title of a blog post by Bill Gates that was made a few years ago. must be taken quite literally – it refers to mosquitoes. And recently, the version of biological weapons in the form of these biting insects has become widespread.

Accusations made at the UN

In October, Vasily Nebenzya, Russia’s permanent representative to the United Nations, accused Ukraine of intending to use a biological weapon – mosquitoes, which infect people with dangerous infections. Allegedly, in the Kherson region, three special drones were found in the spring, which are capable of spreading mosquitoes infected with pathogens. At the same time, on each drone, the volume of the tank for insects is 30 liters. And such specific aircraft, according to him, are patented in America.

True, no evidence was presented, so this assumption caused skepticism and irony. Ferit Hoxha, for example, the representative of Albania in the UN Security Council, asked in his speech how mosquitoes could distinguish Russians from Ukrainians. But if without jokes, the real facts from the past, slightly changed, when applied to reality, sound quite plausible.

Among all known animals, it is mosquitoes that are responsible for the largest number of human deaths. It was they who were also participants in more than one biological weapons development program in different countries. And today, mosquitoes are indeed being spread by drones. The only thing that the permanent representative of the Russian Federation did not mention is genetically modified mosquitoes. But they really exist and fulfill the role assigned to them. But first things first.

“These animals kill more people every day than sharks killed in a century,” wrote Bill Gates a few years ago. Unbiased statistics show that over the past century, sharks have killed just over 1,000 people, that is, about ten people annually. And because of mosquitoes, almost 1,500 people die every day, that is, about half a million a year. It’s all about malaria, which people get infected from these insects. According to the WHO, 630,000 people died from it in 2020, and in total, more than 240 million people suffer from malaria every year.

And this is just one of the many dangerous diseases that biting mosquitoes infect people. There are also dengue, chikungunya, yellow fever, West Nile fever, Zika fever and many other dangerous infections. Basically, the problem concerns the countries of the subtropical and tropical regions. More than 90% of all cases of malaria are recorded in Africa, but mosquito-borne diseases are also common on other continents.

The idea to use mosquitoes as a biological weapon appeared 80 years ago. In early 1942, Heinrich Himmler founded an entomological institute in the Dachau concentration camp – there, supposedly, they were supposed to investigate insects dangerous to humans. For example, fleas that cause typhus in soldiers in the trenches. This was the official version. And only in the 21st century, researchers discovered the protocols of secret experiments with mosquitoes, which were carried out here closer to the end of the war. From them it can be concluded that the Nazis intended to scatter malaria-infected insects over enemy territory.

And what is characteristic: the study of dangerous viruses and bacteria, as well as insects that can carry them, is not a crime in itself. After all, such studies are needed not only to create biological weapons, but also to protect against them. And it is very difficult to prove the malicious intent of research. Unless something like “research for the purpose of developing offensive weapons …” is written in the protocols of experiments in plain text. Therefore, in the history of the Nazis, some modern researchers consider the question open.

How do mosquitoes infect

At first glance, the task of turning mosquitoes into weapons does not look like something super complicated. It’s not a chemical weapon. Nature itself took care of mosquitoes “stuffed” with viruses many thousands of years ago, and they are perfectly able to do their job. You just need to point them in the direction, “set” them on enemies. But in reality, everything is much more complicated.

A mosquito is not born with a virus. To get it, it must bite an infected person or animal. If the target is a weapon of mass destruction, hundreds of thousands of insects are needed, and obtaining them in the laboratory is quite difficult. Americans, for example, in the last century tried to infect mosquitoes with yellow fever, bypassing nature – they added the virus to the water where insect larvae developed. And unexpectedly, it worked—adult mosquitoes that grew from infected larvae were ready to bite and infect.

The next stage is the meeting of mosquitoes with future victims, how to organize it? It is absolutely not enough to put a conditional Pandora’s box with insects “next to the enemies”, open it and wait for the result. The main problem is that mosquitoes fly only a few meters. And if the front line stretched for many kilometers? It is indeed possible to use drones to solve such problems, but in the middle of the last century even Americans could only dream of them.

In 1955, the United States conducted an experiment called “Operation Big Buzz” (“Big Buzz”). Over the state of Georgia, they dropped more than three hundred thousand mosquitoes from aircraft in special bombs. The insects were “clean”, without dangerous infections. The purpose of the experiment is to test how well the insects will be able to find their victims after such a landing. The role of the victims was played by guinea pigs in cages and volunteers. As it turned out, the mosquitoes coped with the task perfectly.

After that, the Americans conducted at least two more experiments on the release of mosquitoes. But information about them is not publicly available. This is the rule rather than the exception when it comes to biological weapons. And secrecy is an excellent ground for various myths, speculations and propaganda.

Biological weapons in the USSR

The powerful biological weapons program in the Soviet Union goes back to the distant 1920s. An idea was born to use typhus as a weapon, a disease that affected millions of people during the First World War. Later, cholera, plague, anthrax, tularemia and other dangerous diseases joined typhoid.

At the same time, the Soviet authorities managed, unwillingly, “to test their biological weapons on their own citizens. In 1979, an anthrax agent leaked in a secret military laboratory in Sverdlovsk. As a result, according to various sources, tens and hundreds of people died. Naturally, no one made public the real cause of death, and the outbreak was explained by natural causes – infected cattle meat.However, there is a small nuance: when infected through meat, anthrax manifests itself in ulcers, but when inhaled pathogens, a pulmonary form occurs, which was observed in the victims.

And this is far from the only development in Soviet times. American entomologist Jeffrey Lockwood in his book “Six-Legged Soldiers: Using Insects as Weapons of War” (“Six-legged soldiers: using insects as weapons”) says that the USSR worked with the West Nile virus, which is transmitted by mosquitoes. There is a version that these developments were received by Saddam Hussein, who planned to use “six-legged weapons.” Hussein claimed that the virus he wanted to release leads to almost 100% lethality.

It should be noted that there are severe complications and deaths from West Nile fever, but in most cases it either does not manifest itself at all or shows flu-like symptoms. About ten years ago, a sanitation station in Odessa, Ukraine, investigated ordinary mosquitoes living in the basements of residential buildings. As it turned out, 10% of them were infected with the West Nile virus, but cases of the disease among humans have not been reported.

To combat the dominance of mosquitoes on the planet, the use of genetically modified insects is effective. Such mosquitoes of the species Aedes aegypti were created in 2013 by the American company Oxitec. Outwardly – mosquitoes, like mosquitoes. But researchers turned one of their genes into something like a time bomb.

Genetically modified males are released into the wild, where they mate with wild females. The altered gene is inherited by all their descendants, regardless of gender. Females die because of it – either at the stage of larvae, or already “with wings”, but in any case before they start biting and infecting people. Males, who never bite at all, remain alive and well, but without females, they cannot reproduce, and the population practically disappears.

Thanks to such laboratory mosquitoes, wild populations of dangerous mosquitoes can be controlled. And it is much more effective than insecticides like DDT, which kill not only mosquitoes, but also everything else living around. Genetically modified mosquitoes, while scaring some people more than yellow fever, are no more dangerous than, for example, genetically modified rice. In 2016, such mosquitoes were successfully released into the wild in Brazil, and then in the Cayman Islands, in Panama, India, and in 2021 in California. Just for such tasks, special drones are really used.

How mosquitoes are transported

Nebenzya said in his speech that the drones found in the Kherson region can carry 30 liters of mosquitoes each. Sounds menacing. But how realistic? The task is really difficult: you need to load a lot of mosquitoes into a drone, and then make sure that they all arrive at the right place alive and able to do their job. That is, the question arises: how to properly transport thousands of mosquitoes?

A few years ago, American scientists conducted a series of experiments. They filled a ten-cc syringe with mosquitoes, and then carefully squeezed it down to one cubic centimeter. Three filling options were tested – 10, 40 and 240 insects per cubic centimeter. Syringes with mosquitoes were cooled and sent to “flight” – they flew in an airplane for 20 hours. After that, the results were summed up, that is, the losses were determined.

As it turned out, in a spacious syringe, which was shared by only ten mosquitoes, most of them did not survive the flight. Of the 40 mosquitoes in another syringe, only a few survived. Those mosquitoes that were crowded survived the flight best of all – out of 240 insects, 85% remained alive. Researchers are puzzled over why this is so. One suggestion is that when mosquitoes are crowded, they are less likely to be injured due to vibration in flight. Based on such calculations, only one drone “discovered” in the Kherson region could transport more than 6 million live mosquitoes – much more than the entire Russian army.

So were there “combat mosquitoes”?

The International Biological Weapons Convention prohibits the development, production and possession of any biological weapons. Today, 184 countries, including Ukraine, are parties to the convention. Hence the conclusion – within the framework of the law, there are no “combat mosquitoes” or other similar weapons in Ukraine. Given the heightened focus on Ukraine today and the country’s openness to international scrutiny, it’s hard to imagine anything like this being covered up.

There is another, important reason why the appearance of combat insects in Ukraine is impossible. In recent years, against the backdrop of the unfortunate state of Ukrainian science, all zoology departments have been closed at universities, and biology students are choosing more promising and prestigious specializations, such as molecular biology. About 20 years ago in Ukraine there were specialists who specialized in the study of mosquitoes. But there is no young replacement for them, so today no one is thoroughly engaged in this group of insects in Ukraine. And this can become a real problem as dangerous mosquito species appear in the country. There simply will not be specialists who can identify them and understand their biology.

You can, of course, rely on the experience and technology of foreign specialists. But this is reminiscent of the story with missile systems – it is one thing when a country produces its own and quite another when it is forced to ask someone for them.