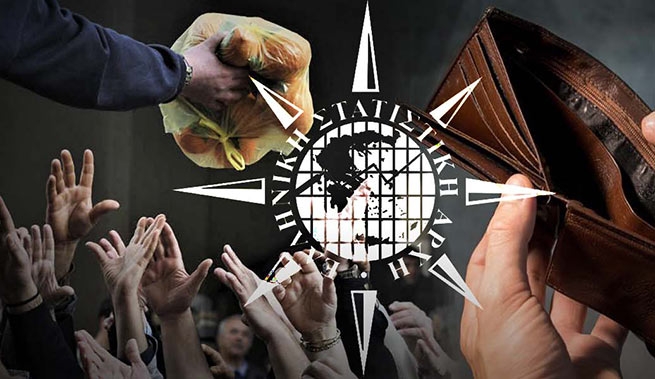 The Greek Statistical Office provided shocking data on the level of poverty, which, despite the victorious reports of the Mitsotakis government, turned out to be even higher than at the time of the memorandums.

Despite explicit prohibitions on the publication of such data, the Greek Statistical Office ELSTAT published a report according to which the proportion of citizens who are below the poverty line is 29.5% (3,092,300 people of the country’s population), showing an increase of 0.6 percentage points compared to 2020.

Information erupted through victorious reports and joyful cries that indicates that Greece has moved in second place in EU after Bulgaria among the countries with the highest poverty rate. At the same time, the percentage of families in below the poverty level (29.5%), it turns out after the distribution of social benefits. Without them Greece’s poverty rate jumps to 48.2%, which is almost half of the country’s population!

Unemployment in August was 12.2%, despite the tourist flow. In relation to the average for the European Union, it is twice as high (6% in the EU and 6.6% in the euro area). In the EU, only Spain, with 12.4% higher than Greece, is followed by Cyprus, where the unemployment rate is 8.6%. Youth unemployment is 29.2%, giving Greece sad first place in the EU!

According to official figures, the public debt reached 359.1 billion euros, with a GDP for 2021 of 216 billion US dollars (for 2022 supposed $245 billion), close to 182% of GDP, after two debt haircuts that wiped out insurance funds and the manufacturing structure. Repayment of loans is predicted, if all goes well, in 2115.