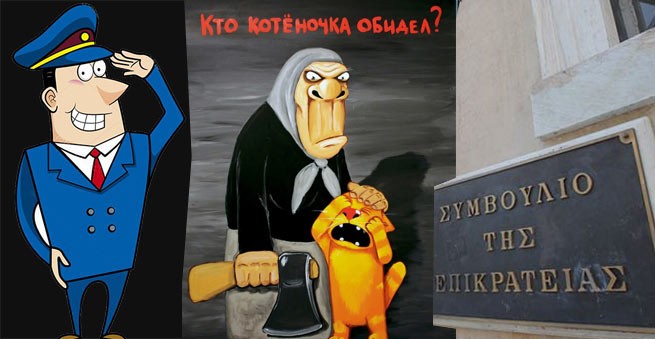 The police officer was arrested yesterday afternoon by Tripoli department officials and is facing charges of violating pet welfare laws.

According to the police, as it turned out, the policeman, being off duty, last night on Thursday, October 27, kicked a cat of an unknown owner. The prescribed administrative fine of 5,000 euros was imposed on the police officer, and at the same time a sworn administrative examination was ordered.

The detainee, according to the police, was released on the oral order of the District Attorney of Tripoli, and the Tripoli Police Department is conducting a preliminary investigation into the case. The local police department reported that an unworthy law enforcement officer would be fired from the police without any compensation.

As we reported previously, the prosecutor of the Supreme Court of Greece demanded a review of the case in which the man who kicked the cat was acquitted. According to the court, which took place on October 19 in the city of Chalkis on the island of Evia, where this terrible crime was committed this summer, the accused is innocent, and the case was closed due to lack of corpus delicti.

According to animal activists, led by journalist Stamatina Stamatiku, the case needs to be reviewed, and the young man who kicked the cat should be exponentially punished. According to some animal activists, the minimum punishment for him is a public execution in the central square of the capital of Greece.

Judging by the reaction of the prosecutor of the Supreme Court, who personally dealt with this court decision, as well as by the previous personal intervention of the Minister of Citizens’ Protection (MVD), animal activists have patrons in the highest circles.