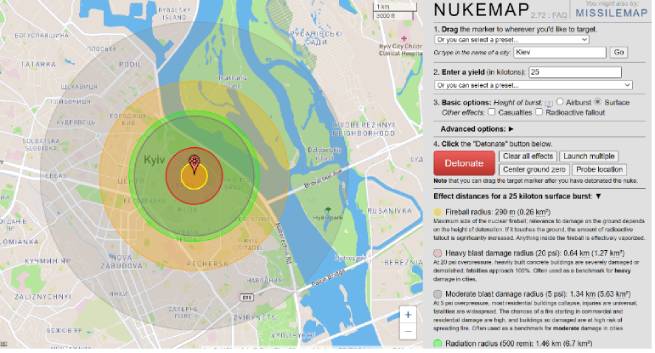 The nuclear scenario, the threats of which have been heard lately, should be taken seriously. Not only well-being or health, but also life depends on the right actions during and after the explosion. What to do in case of a nuclear attack? State bodies of different countries and the media are increasingly publishing important recommendations from specialists.

The world is once again facing the threat of a nuclear strike, and more and more people are talking about a nuclear conflict as a possibility. The United States and Europe are convinced that such a scenario should be taken as seriously as possible.

The latest US intelligence suggests that the risk of Moscow using tactical nuclear weapons in the war in Ukraine is the highest since February 24. And some experts argue that the likelihood of nuclear war is now the highest since 1962, since the Cuban Missile Crisis. Our publication has tried to collect the most important recommendations from various official resources. But still, we sincerely wish that these tips are not useful in reality.

Is it possible to survive after a nuclear strike, what are the chances?

The survival formula in such conditions consists of three components:

That is, firstly, one should follow official reports about the threat of a nuclear strike. The sooner the information is heard, the more chances to survive – you need to get as far as possible from the alleged site of the explosion and find a safe shelter. However, it is possible that the blow will come as a surprise, and its specific place will be unknown until the last moment.

Secondly, the distance from the epicenter depends on the power of the nuclear warhead. The yield of tactical warheads can vary over a wide range from 0.5 to 100 kilotons. Strategic ones reach a capacity of tens of megatons. Many experts are sure that tactical nuclear weapons will be used in Ukraine (if applied). However, one can doubt such confidence – everything will depend on the tasks set by the enemy, on the opposition and response that he could potentially face in any case.

The power of the warhead affects the size of the danger zones, depending on the degree of damage. For example, the Kinzhal missile carries approximately 25 kilotons of charge and can overcome missile defense systems. At least that’s what the media says. The area of ​​different degrees of its destruction can be modeled in the Nukemap service (an interactive map using the Mapbox API and declassified data on the impact of nuclear weapons) using the example of Kyiv.

The orange color is the radius of the fireball, which will reach 290 meters. It is probably not worth specifying that this is a guaranteed death.

Red color – mass destruction within a radius of 640 m from the epicenter.

Dark gray color – severe damage to most buildings within a radius of 1.3 km from the epicenter of the explosion.

Lettuce color – a zone of severe radiation contamination, spreading to 1.5 km from the explosion. Those who did not have time to hide in a shelter will receive serious radiation burns, which in most cases end in death.

Light orange color – a heat wave propagating 2.11 km from the epicenter. Without reliable shelters, most likely, it is also difficult to survive here. The main thing in this case is to choose them not transparent, the best option is a basement or a stone house. Insufficiently solid structures can catch fire.

That is, if a “Dagger” flies to the area of ​​the government quarter of Kyiv, then the zone of radiation and thermal damage will cover several areas of the Ukrainian capital, it will be almost impossible to survive without shelter. In the event that a 100 kiloton bomb hits it, the picture will be somewhat different. The radius of the fireball, in which any matter evaporates, is half a kilometer. At a distance of 3.2 kilometers from the epicenter there will be 100% mortality, concrete buildings will be destroyed. Survivors in this zone are unlikely to live more than a month, they will die from radiation sickness. 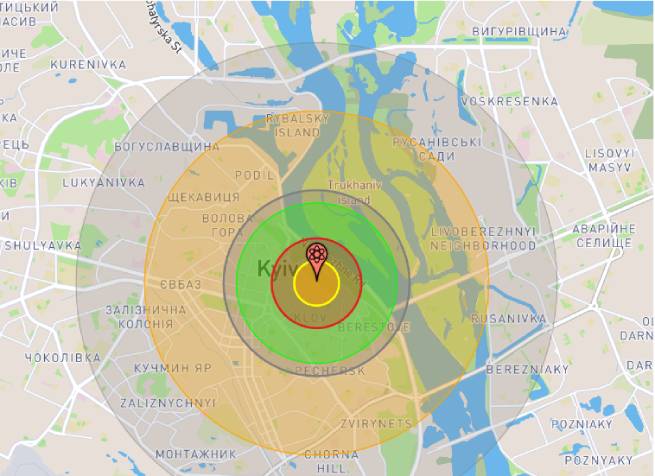 There are several zones of destruction in any nuclear strike, their area varies depending on the power of the warhead:

one. Zone of guaranteed death from light or shock waves. It is possible to survive only in specially equipped bunkers.

2. Zone of severe damagethe likelihood of fatally severe burns, the deadly effects of a shock wave and a large dose of radiation.

The chances of survival depend on the availability and characteristics of the shelter. The main advice – if by any means you learn about a nuclear strike, immediately seek shelter – the deeper it is, the more likely it is to survive. Among the possible options:

3. Zone of moderate destruction, relatively small radiative forcing. It is much easier to survive: any basement and even a recess in the ground will do as a shelter. The main thing is not to be at the window or on the street at the moment of impact.

Following an impact, it is important to follow recommendations to minimize radiation exposure. And remember that immediately after the explosion, a powerful electromagnetic pulse will turn off all electronics and most of the electrics (including in cars) in a large radius from the epicenter. That is, in the first hours and days there will be no communication with the outside world through any electronic communications. And now let’s look at the official recommendations of the Ukrainian, Russian and American authorities – what to do in the event of a nuclear attack.

The Ukrainian Ministry of Health recommends

the most dangerous in department called the situation of a ground nuclear explosion. The resulting radioactive cloud (from particles of soil and dust) moves with air currents and settles within 10-24 hours. This movement of a dirty nuclear cloud is called a radioactive trail. Five main tips from the detailed instructions:

1. Close indoors. In the first days after the explosion, it is extremely important to be in rooms, basements or shelters, since the greatest danger of infection is in open areas. If the shelter is located far away, you should stay at home with closed windows, doors, vents and vents, and also need to tape the cracks in the window frames. Windows can be covered with blankets. The total duration of compliance with the radiation protection regime is from 4 to 15 days, depending on the zone of infection. Remember:

2. Food and water. Put food in the refrigerator, isolate them as much as possible from external influences (food wrap, containers). Make a supply of water. The safest is from the water supply (pipes run underground), from artesian wells and other sealed sources.

3. Drugs. In order to reduce the severity of the consequences of ionizing radiation, special chemicals (radioprotectors) are used. They are common under the names: cysteine, cystamine, cystophos and other derivatives. They need to be taken at the beginning of radioactive contamination, they will reduce the effectiveness of irradiation by about 1.5 times.

4. Respirators, masks and shoes. The use of gas masks, respirators, anti-dust fabric masks and cotton-gauze bandages will reduce the ingress of radioactive substances into the body through the respiratory organs. It is necessary to use raincoats with hoods, capes, overalls, rubber shoes, gloves. The main idea is to close yourself from the outside world as quickly as possible with the help of clothes and premises, similarly covering food and water.

5. Urgent decontamination of radioactive contamination. The skin, hands and body should be thoroughly washed several times with soap. Eyes, ears and mouth – wash gently with water. Clean ears with cotton swabs. Wash your hair with soap and water, leaning back so that water does not get into your eyes or mouth.

The US government released list of recommendations in the event of a nuclear defeat, in which there are five main points:

one. Leave the room. Enter the nearest building to avoid radiation. It is best if it is made of brick or concrete. Go to the basement or the middle of the building. Stay away from outside walls and roofs. Stay inside for 24 hours unless otherwise instructed by local authorities. Open areas, vehicles, mobile homes do NOT provide adequate shelter. Look for basements or the center of large multi-story buildings.

2. After removing contaminated clothing, cleanse the skin – wipe it thoroughly or wash it if you were outside. If possible, avoid touching your eyes, nose, and mouth with your hands. Wash your pets that were outside as well.

3. Masks and distance. Put on breathing masks. Maintain social distancing by maintaining a distance of at least 1.8 meters between yourself and people who are not members of your family.

four. Follow official announcements and the media to get reliable information, such as when it is safe to get off and where to go. At the same time, battery-powered radios can work after a nuclear explosion. Mobile communications, television and the Internet may be intermittent.

5. If a nuclear strike caught on the street. Take cover from the explosion behind everything that can protect (ledge, moat). Lie face down to protect exposed skin from heat and flying debris. If possible, avoid touching your eyes, nose, and mouth with your hands. If you are in a car, stop, close windows and doors, cover your head with your hands. After the shock wave passes, take cover in the nearest shelter to protect yourself from possible radioactive fallout. You will have approximately 10 minutes to find a suitable shelter after the shock wave has passed and before the radioactive fallout.

The US government lists other dangers that are associated with nuclear explosions:

Nuclear explosions can cause significant damage and loss of life due to the blast wave, heat, and radiation, but you can keep your family safe if you know what to do and be prepared if it happens.