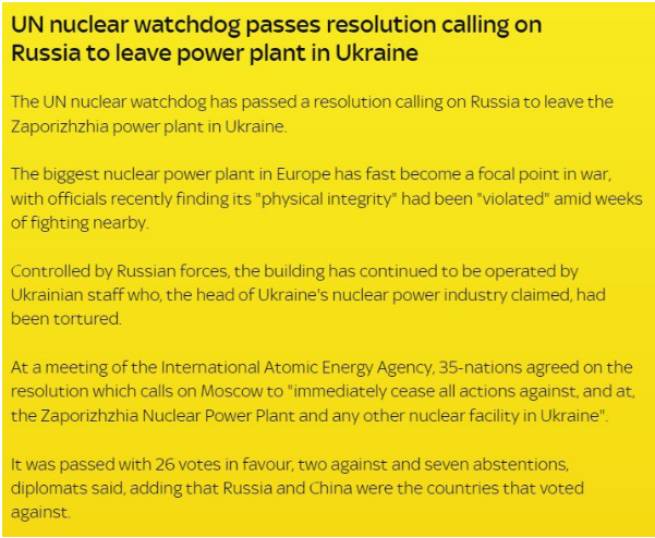 The Board of Governors of the IAEA at a closed meeting adopted a resolution demanding the withdrawal of Russian troops from the ZNPP territory and to stop any actions. “For” voted 26 participants.

It is reported, with reference to diplomatic sources, the agency Reutersquoting the resolution:

“Immediately cease actions against and at the Zaporozhye NPP.”

Russia and China in the IAEA, as expected, voted against. Russia’s permanent mission to the UN called this resolution “anti-Russian”, while noting that it was “dragged” by Western countries.

Our publication previously reported that the head of the IAEA said: shelling of the Zaporozhye nuclear power plant continues, the reactors and the territory where the spent fuel is stored are under threat.

On September 11, power unit No. 6 of the Zaporozhye NPP was disconnected from the power grid, which led to a complete shutdown of the plant. Earlier, the head of the IAEA, Rafael Grossi, suggested that Ukraine and Russia conclude an agreement on a ban on attacking the Zaporozhye nuclear power plant.