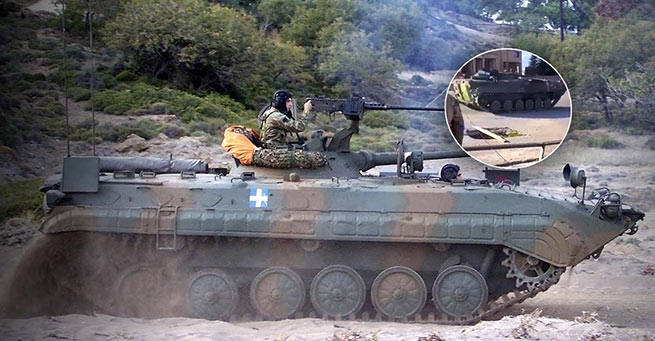 In the battles against Russian troops in Ukraine, former Soviet-made Greek infantry fighting vehicles of the BMP-1 type are already taking part, as can be seen in the revealing photo.

As previously reported by pronews.grGreece has already withdrawn the BMP-1 from the island of Chios, and now they are heading to Ukraine, and the island remains defenseless until they are replaced … with American M-113s.

Of course, at the same time that the Greek Islands Military High Command (ΑΣΔΕΝ) is moving BMP-1s out of the Greek islands, Marder combat vehicles are still being prepared for shipment to Greece, as Germany is actually collecting them from landfills.

“We have decided to send two more MARS II multiple rocket launchers with 200 missiles to Ukraine,” she told a German military conference, adding that training for Ukrainian operators should begin in September.

In total, as we reported earlier, Greece will send about 500 BMP-1s to Ukraine.

In 1992-93 Greece received from Germany at a discounted price of about 500 BMP-1s, which the FRG inherited from the GDR army. Later, these Soviet BMP-1s were upgraded and brought up to NATO standards and entered service with the Greek army.