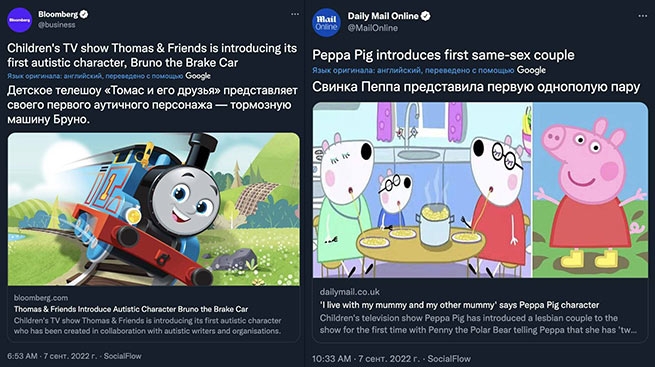 New “morals and norms” are trying to pass on to young children the well-known liberal power centers who want to impose a “great reset” on society through children’s programs. It promotes not only the very existence of same-sex couples, but mainly the prospect of having children from them.

If Cicero were alive today, he would have exclaimed: “O times, o manners!” A typical example is the famous show “Pep’s Pig”, where Pep’s friend, Penny, admits that she lives with two … mothers.

It is one of the most beloved children’s series and has been running continuously for 18 years since 2004, which means that it has a great impact on children. This “new” was introduced on Tuesday in an episode of “Families”, which aired in the UK. Peppa has a classmate Penny the White Bear. Penny is raised in a lesbian family. Says: “I live with my mother and with my other mother.”

Try to imagine lesbian sex of two polar bears. In the ice of the Arctic. And such seals look from afar and o … whine. Take your time, let your imagination run wild.

Parents in Greece should think twice when they allow their children to watch “innocent” children’s shows because they are the first and foremost line of propaganda for any change the new global “elite” wants to bring to the world.

Needless to say, those who disagree with this will never watch this show again. But the state television channel ERT, which is paid by all of us (voluntary-compulsory), what right does it have to propagate this and even say: “Thank God, the world is changing”?

It is one thing to live the way you want, and quite another to promote a certain non-traditional way of life, as “normal”, to children during the formation of their personality.