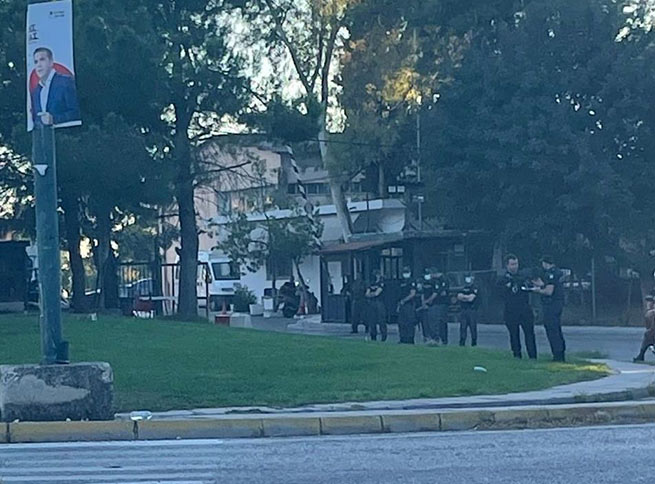 The scene at the gates of Kokkinopili in the Polytechnic is shocking. On the walkway opposite the gate and to the right of the entrance is a group of police officers for the dispersal of demonstrations and maintenance of order (MΑΤ), and to their left 12 police officers from the new university police unit (ΟΠΠΙ).

Employees ΟΠΠΙ were dressed in green uniforms, green jockey caps and medical masks, and their long clubs were clearly visible to passers-by. police officers ΟΠΠΙ lined up in two lines, facing the entrance to the Polytechnic Institute. They were talking to their colleagues, a group of about 10 people, who were outside the campus – in addition to them, there were also two police motorcycles and at least one car of the ΟΠΚΕ special group.

On the opposite side of the street, the Polytechnio Gate (ΕΜΠ) was filled with banners. “Terrorism will not pass. Remove the police from the faculties,” read the inscription, fixed on the gate and in full view of the police. This situation continued until late in the evening, when part of the university was overflowing with those who came to support the students.

About 20 members university advocacy groups (ΟΠΠΙ), as they are called, appear every afternoon outside the two schools, but they do not go inside because they are confronted by students who oppose ΟΠΠΙ.

Embarrassment is evident in the leadership of universities and the university community, while voices are increasingly being heard that the current situation reduces the political significance of the project. Yesterday, at the entrances to two universities, the pattern of the previous days was repeated, and students from the youth left party went to the center of Athens, arranging a rally.

Late in the evening, student associations associated with the KKE held a rally at the Propylaea and then went to Syntagma with the slogan “University police – down with the schools.” Students fight for education and free education. This scene was repeated this afternoon at the gates of the University of Athens campus, when student associations and university workers’ unions called a meeting to coordinate their actions.

However, the events taking place with ΟΠΠΙ in ΕΚΠΑ and ΕΜΠ receive criticism from both those who oppose their institutionalization and those who believe that the project failed. “The problem of widespread lawlessness and crime in some universities is a perverse consequence of the survival of a post-dictatorial culture – a sad prototype for the Western world, which for years used the notorious right of “asylum” as a cover. Since the same university community could not find a way out, the decision on unarmed security officers Universities (ΟΠΠΙ) was introduced by the current government, but on the one hand, its implementation has been delayed, and on the other hand, it is not being implemented as it should be,” said Dimitris P. Sotiropoulos, professor of modern history at the University of Peloponnese in an interview with Kathimerini .

In addition to the government’s reluctance to implement this measure and the opposition’s refusal to recognize lawlessness as a problem, Sotiropoulos adds another factor that complicates the implementation of the project. “The difficulty for rectors is that they become uncomfortable with activist minorities. However, EL.AS was not particularly positive, not wanting security problems in an area such as universities, which, quite erroneously, is not considered entirely their responsibility.