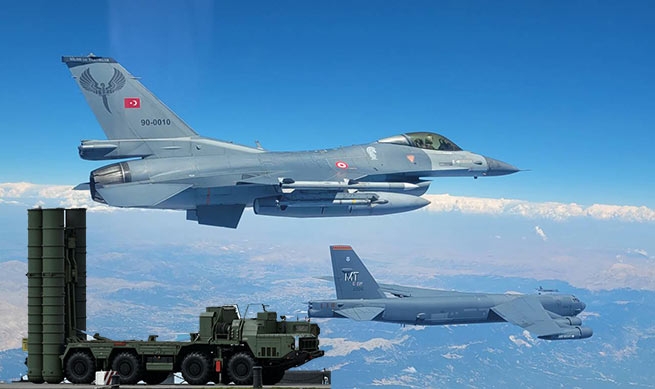 Citing sources in the Turkish Ministry of Defense, the news agency Anadolu reported that “Turkish F-16 fighters were harassed by the Russian-made S-300 Greek air defense system stationed on the island of Crete.”

“Turkish planes flew missions over the Aegean and the Eastern Mediterranean,” the sources added. They are received a S-300 air defense radar alert on them on August 23 during a mission in international airspace, the sources, who requested anonymity due to media restrictions, said, calling the pursuit of Greece a “hostile act” according to NATO rules of engagement.

“Despite this hostile act, the aircraft carried out their planned tasks and returned safely to their bases,” the sources added, without mentioning, of course, that they violated Greek airspace in the Aegean Sea.

Sourcesreportedly wondering “why some NATO countries continue to criticize Turkey for buying Russian-made S-400 systems, but say nothing about Greece.” They clearly forget that Greece received two air defense systems S-300 from Cyprus in December 1998 to prevent further escalation crisis between Turkey and Cyprus.

Speaking to mass media, the Greek Ministry of Defense denied Turkey’s statements. Greek military sources stated that “the S-300 radar was not activated on that day and time, as claimed by the Turkish media, while they emphasized that no NATO exercises were conducted on that particular day.”

According to state broadcaster ERT, Greek sources accused “Turkey of spreading fake news to create tension” and that “Greek prank fighters are quite capable of intercepting and don’t need to activate the S-300.”

Recall that on August 23, Turkish F-16s entered the FIR of Athens west of Rhodes, without providing a preliminary flight schedule, and were intercepted by Greek fighters, as reported by Greek General Staff.

It is worth noting that earlier Washington insisted that Greece handed over the S-300 systems available in the country to Ukraine. In exchange, it was proposed to purchase the Patriot air defense system from the United States. Greece refused at the last moment.