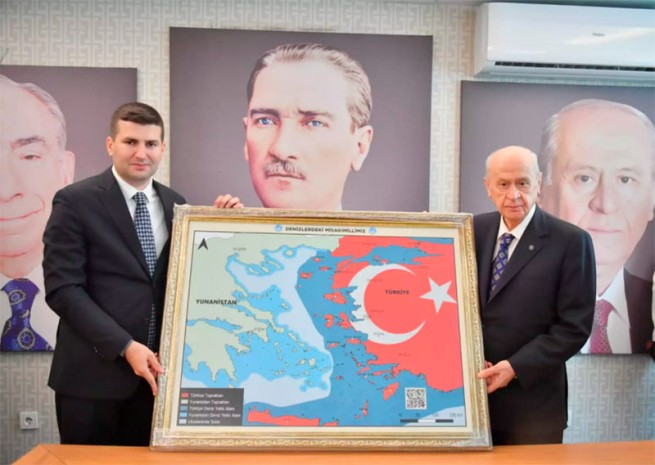 A new provocative narrative from Turkey, which after all is not very new: Ankara nationalists and Kemalists, the deep state, claim that three of the four regions of Crete belong to Turkey and only one, the region of Chania in the west, belongs to Greece.

The Turkish news site TR Haber recently published a post by former Secretary General of the Turkish Ministry of Defense Yumit Yalim. A retired officer and military geopolitical analyst has formulated a version that Crete is under … “illegal” occupation by Greece in 3 out of 4 regions.

TRHaber welcomes on Twitter: “Crete belongs to Turkey! The presence of the US and Greece is illegal! The Greeks occupied the whole island without the approval of the Ottomans, when the lands were to be transferred to the former owner.”

In a deliberate mixture of historical facts and forced Turkish expansionist dreams, Yalim sets out his argument that 3/4 of Crete belongs to Turkey.

“After the First World War, which ended with the defeat of the Ottoman Empire, many Turkish islands in the Aegean Sea were left with an uncertain legal status. The most important of these islands, handed over to Greece by the great powers of the time without the approval of Turkey, is undoubtedly Crete, in its position resembling an aircraft carrier in the middle of the Mediterranean. Crete, one of the islands whose legal status remained unclear a century after the war. In fact, on paper, it never belonged to Greece. There is no official agreement that Athens owns the entire island,” says Yalim.

He cites the “London Agreement (05/30/1913), which determined the transfer of Crete to the “Allied Powers”. These “allied states” defined by England consisted of Bulgaria, Montenegro, Serbia and Greece. After the transfer of Crete to these four countries, Bulgaria, Montenegro and Serbia withdrew from the treaty and renounced their rights. With the departure of these three countries, while it was expected that 3/4 of Crete would go to its former owner, namely the Ottoman Empire, Athens created a de facto situation by occupying the entire island.

He deftly distorts the London and Bucharest treaties after the end of the Balkan Wars of 1912-1913, because he claims that no article mentions the cession of Crete to Greece.

“Greece was given 1/4 of Crete. The 14 islands, islets and rocks around the island are still under the sovereignty of the Ottoman state,” writes Yalim, who at the same time demands the “evacuation” of Rethymno, Heraklion, Lassithi, as well as islands around Crete such as Gavdos, Dias, Dionysades , Gaiduronisi and Koufonisi.

The ex-secretary, of course, hides from his readers Article 4 of the Treaty of London, which clearly states that “the Sultan renounces everything that he owned on the island of Crete, and transfers to the allied sovereigns all the rights of sovereignty”, and all other rights, which he possessed on this island”, but also the Treaty of Athens (see below).

It should also be noted that in the “Bucharest Treaty”, signed after the end of the Second Balkan War, the defeated Bulgaria directly renounced all its claims to Crete.

TRHAber’s story begins just three days after Erdogan’s junior coalition partner, the ultra-nationalist Devlet Bahceli, posed with a Turkish map, which states that half of the Aegean with its islands and Crete belong to Turkey.

However, this is not the first time that the Turkish Deep State has claimed 3/4 of Crete, with more or less the same false and fake arguments.

In January 2019, the nationalist newspaper Sozcu published the same map of Cretethus referring to the London Treaty, as well as to Lausanne (1923) and Athens (1913).

Surprise! According to paragraph 2) Treaty of Athens:

“The Ottoman Empire recognized Greek sovereignty on the island of Crete, which had been an autonomous state under Ottoman suzerainty after 1897.” This is probably why Yalim did not mention the Treaty of Athens.

PS I somehow missed the Turkish argument why Chania is Greek…