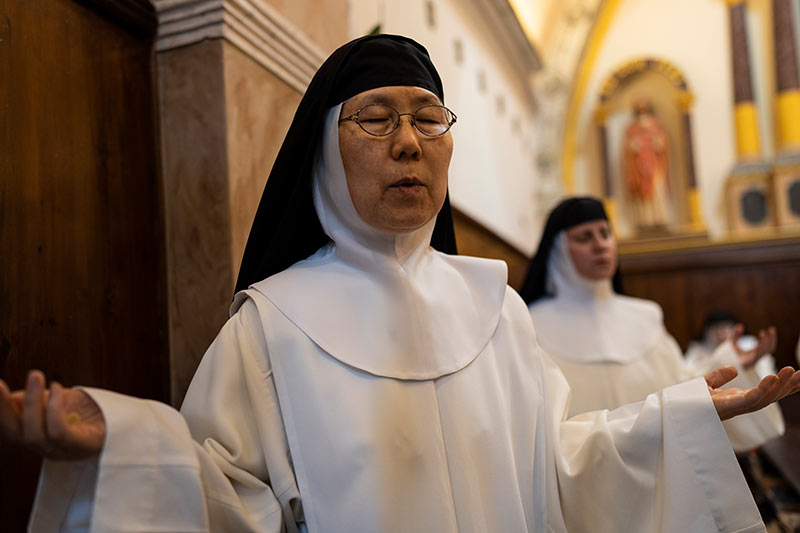 Tourists from cruise ships thronging the souvenir shops and couples chasing the perfect sunset photo on Instagram gather in an alley outside St. Catherine’s Monastery, a stone’s throw from Santorini’s world-famous cliffs.

In this monastery on one of the most fashionable islands in Greece, a predominantly Orthodox country, 13 secluded Catholic nuns dedicate their lives to prayer for pilgrims and for the whole world. This is a very important, albeit often misunderstood, mission within the church, where constant prayer is seen as necessary to support more outwardly involved ministries.

“On a tourist island like this, the last thing people think about is praying, so we are the ones doing it,” Sister Lucia Maria de Fatima, abbess. She and the other sisters spoke in the convent’s drawing room from behind a wide white iron grating that separated the secluded space from the outside world. After more than two years of seclusion due to the pandemic, the sisters will once again welcome visitors to the public area of ​​their church, starting with mass in early August to mark the 425th anniversary of the monastery.

The rest of the monastery is considered a sacred space where the nuns live mostly in silence and contemplation, leaving it only for medical reasons or at the request of the government. “When we go behind bars, we don’t miss anything. When God gave us the call to retreat, He gave us everything we needed,” said Sister Maria Esclava, originally from Puerto Rico.

Reverend Felix del Valle, a Spanish priest, has been conducting periodic spiritual exercises in the monastery for more than 10 years, as part of the strict religious training of the sisters, which begins with a nine-year preparation before they enter into a solitary life. “In the world of consumption and entertainment, they testify that God alone is enough for them,” he said.

Many orders of nuns are active in teaching, health care and service to vulnerable groups such as migrants. But the contemplative nuns continue the tradition of complete devotion to prayer, which goes back to the first hermits of the desert, who sought closeness to God, removing all earthly distractions.

“These women find God in a life of prayer or contemplation,” said Margaret McGuinness, professor emeritus of religion at La Salle University in Philadelphia.

Sister Maria de la Iglesia spent almost 40 years in Santorini before moving to Spain to head the Federación Madre de Dios, or Federation of Our Lady, which oversees the island’s monastery and nine other Catholic Dominican monasteries on four continents.

“In today’s logic, our life is not understood or valued, but in the church it is,” she said. – We are the voice of the church, which tirelessly praises and asks on behalf of all mankind. It’s an exciting mission.”

When sisters between the ages of 40 and 80 are not praying or playing music and hymns, they are doing housework: tending a garden where they grow tomatoes, lemons and grapes, and making the communion wafers used in most Catholic parishes in Greece. During two daily breaks, they break the silence to chat on the wide terraces, while the Aegean Sea shimmers in the distance.

At dawn, the bell rings for the first prayer, most of which are sung in Latin, Spanish and Greek. “While the sun rises, creation and man unite in harmony in the praise of God,” said Sister Maria Guadalupe, adding that in monasteries in different time zones, someone always supports active prayer. “We are not out of the world, but rather very involved in the world.”

Sister Maria Jesus and other nuns pray during Mass at St. Catherine’s Catholic Monastery on the Greek island of Santorini Thursday, June 14. The nuns pray for at least nine hours a day, most of the time they sing in Latin, Spanish and Greek. [AP]

According to the sisters, in Orthodox Greece, the presence of a Catholic monastery speaks of the desired unity with other Christians. They exchange holiday greetings with the island’s Orthodox monks and nuns, and enthusiastically recall one visit when they sang hymns together.

“Despite the seclusion, the nuns have always been an important element in the life of the place,” said Fermín Labarga, professor of church history at the University of Navarra in Spain. It was in this country that more than 800 years ago, Saint Dominic founded the Dominican monasteries to constantly pray in what Labargue called the “rearguard” while their fellow believers carried the gospel to the world.

This “missionary spirit in contemplative space,” according to Sister Maria de la Iglesia, continues to inspire today’s nuns, who wear the historic Dominican black veil and all-encompassing white robe, representing repentance and innocence. They arrived in Santorini mainly from the Caribbean (Puerto Rico and Santo Domingo), but also from Angola, Korea, Argentina, Greece and Spain. Sister Maria de la Iglesia was sent to the island in 1981 when there were only three nuns left in the convent.

It was first founded in 1596 on the rocky cape of Skaros. Today it is a popular place to watch the sunset and a haven from pirates. After the earthquake, it was moved to the main city of Thira, a few miles away, where it survived another devastating earthquake in 1956, which caused many residents, including most other Catholics, to leave the island.

Large stones are embedded in an artistic lattice that separates the public area of ​​the church from where the sisters pray, next to a globe that further symbolizes their connection to the environment. The sisters follow world events through various Catholic media and newsletters, and hold daily masses. In the latter, the priest delved into the war in Ukraine, the metaverse, and the dangers of parkour.

They also receive prayer requests from fellow believers and visitors in which they ask for everything from world peace to healing from illness, “and babies, lots of babies,” Sister Maria Flor de la Eucaristia said playfully. “We too suffer with them, we feel the pain of families and the whole world, but with a certainty of hope that gives us joy,” said Sister Maria Fatima, originally from Angola. 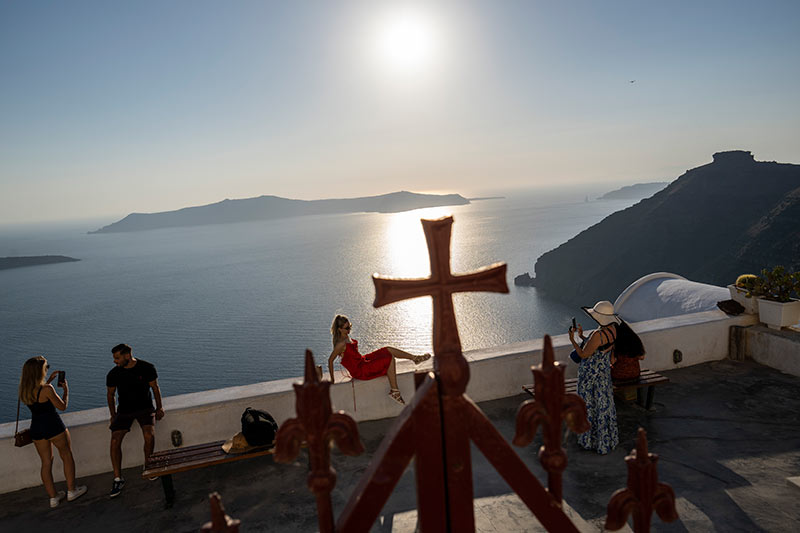 A woman poses for a photograph near the wrought-iron fence of the Catholic Church of the Assumption of the Blessed Virgin on the Greek island of Santorini on Wednesday, June 15. More than a dozen nuns live in the monastery of St. Catherine, who devote themselves to unceasing prayer. [AP]

This confidence in the faith shines in the sisters’ cheerful demeanor, despite a harsh life that requires sacrifice not only from themselves, but also from their families, whom they only occasionally see behind bars. “This is a call from God. You cannot go any other way. A constant call so that you can follow it with joy,” said Sister Lucia Maria de Fatima, originally from Argentina.

They find this joy in abundance in their calling, despite the fact that they forgo most of the activities that attract hundreds of thousands of tourists to Santorini, such as visiting the beach. Sister Maria Isabel said she loves the beaches in her native Puerto Rico. Entering the Dominican hermitage there, she could no longer see the ocean. When she was transferred to the main convent in Olmedo, in the heart of Spain, she thought she would never see a wave again. This was followed by a mission to Santorini.

“God is giving you a grace you didn’t expect,” she said with a big smile before the bell rang and she rushed to the church to continue singing God’s praises.