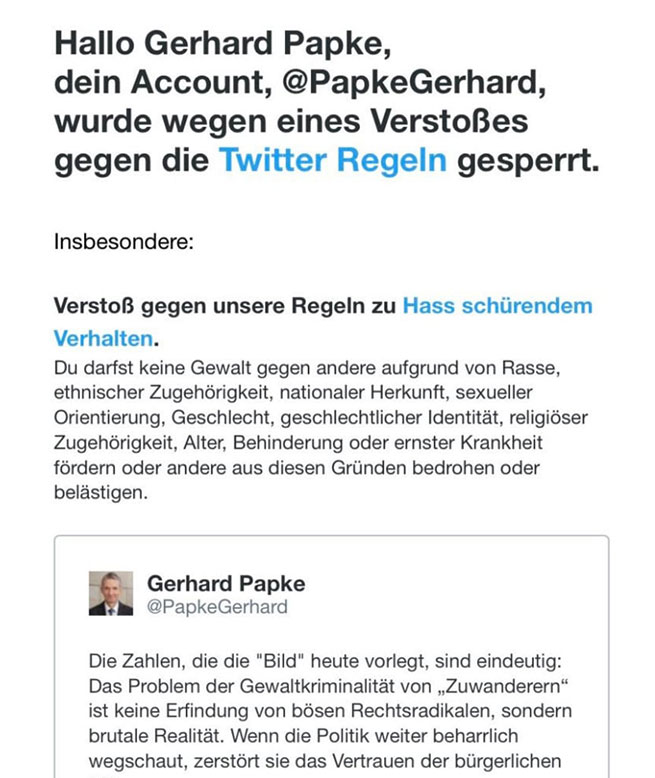 The social network Twitter bans and removes messages that criticize the high crime rate among migrants, according to the publication of the German edition of Bild.

Following the Messer crime in Würzburg, in which a refugee killed three women, BILD published current police statistics on the proportion of suspects and criminals of “non-German origin”. FDP politician Gerhard Papke wrote tweeted about this article – and got banned.

Thus, Twitter, obeying the wishes of the authorities, arranges a real censorship on the Internet, deleting inconvenient facts, acting in line with the state propaganda machine.

“The numbers presented today by Build are clear: the problem of the violent criminalization of ‘immigrants’ is not an invention of evil right-wing extremists, but a brutal reality. If politics persistently looks the other way, it will undermine the credibility of the middle class. “

Former chairman of the FDP parliamentary group Gerhard Papke tweeted this, citing article BILD, and then Twitter was blocked.

Reason on Twitter: “Violation of our code of conduct motivated by hate.” What exactly should incite hatred in fasting is completely incomprehensible!

Papke does not want to put up with this, he takes measures against, but so far unsuccessfully. Of course, hate and slander must be fought everywhere, including on the Internet, ”Papke said.

“But it cannot be that unpleasant truths are suppressed just because some do not want to hear them.”

Papke continues: “This is not about me, but about freedom of speech in Germany. If you are no longer allowed to cite important BILD research, we are clearly on a dangerously wrong track. ”

The article, which Papke refers to in his tweet, focuses on current police statistics, which show how high the proportion of “non-German” suspects and criminals in violent crimes, murder, manslaughter, rape and sexual harassment. Papke called these numbers in his tweet “brutal reality” and warned politicians not to look any further.

Twitter has not yet commented on the BILD request.

In this context, it should be noted that the so-called. experts of Twitter and other social networks, selected according to criteria closed to the public and having free or internal corporate notions about “what is right and what is not, where is truth and where is lies”, are a real threat to freedom of speech worldwide, so these the same networks, have long ceased to be a local phenomenon and are global information resources, covering most of humanity.