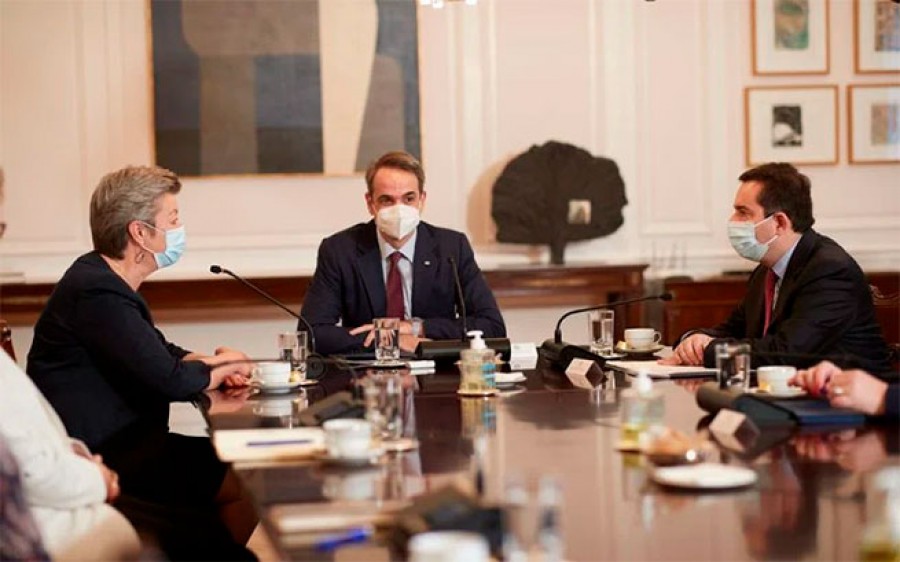 The Commission’s proposal for a new pact on immigration and asylum was the focus of a meeting between Prime Minister Kyriakos Mitsotakis and EU Commissioner for Internal Affairs Elva Johansson on Tuesday morning.

During the meeting, according to a report from Megoro Maximos (residence of the Prime Minister of Greece), both sides agreed that substantial improvements are needed on the basis of solidarity so that all responsibility for solving the immigration problem is not transferred exclusively to the border states of the pact.

The need for full implementation of the EU-Turkey Joint Declaration of 18 March 2016 for an effective solution to the problem was also emphasized. Also discussed were the events concerning the reception of refugees and immigrants in Greece.

Welcoming Ms. Johansson, the Prime Minister said: “I understand that you had an interesting and constructive visit to our islands, where you had the opportunity to become more closely acquainted with the problems of protecting the EU borders. It would be very interesting to discuss the new pact on immigration and asylum in order to understand how we can find a compromise solution that will apply the logic of fair burden sharing among EU member states in solving this very difficult problem. ”

For her part, Elva Johansson noted that “yesterday we had a very productive day with Mr. Notis Mitarakis. We have good cooperation on many issues, and I believe that over the past year we have achieved a lot together, for example, in unloading the islands, as well as, in connection with the fire in Moria, the construction of new structures. It is good that we have the opportunity to visit the place and talk with residents, immigrants, mayors, NGO staff. ”

The Prime Minister replied: “It is important for us to recognize that, in fact, one year after the Lesvos incident, the Moria fire and after this enormous sense of insecurity that was evident on all the islands, we have now made significant progress in terms of unloading them. … We are moving forward with EU assistance in the construction of permanent facilities on the islands, which is a decisive change from what has happened in the past. I want to thank the EU for the general support it provides in solving this very difficult problem. “

Ms Johansson reminded those present that yesterday she announced the allocation of 276 million euros for the construction of new facilities to accommodate refugees and migrants.