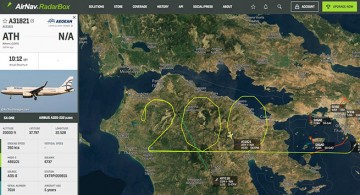 On the 200th anniversary of the Greek Revolution, Aegean marked it symbolically by drawing the number 200 on the map. An Airbus A320 formed the number 200 on the radarbox map as it flew over the Peloponnese to commemorate the anniversary of the Greek Revolution. The flight, also designated with the symbolic number “A3 1821”, departed from El. Venizelos, arrived in Achaia, and from there began to form the number 200, flying at an altitude of about 6 kilometers (20 thousand feet) over the places where the revolution began, and especially over Ancient Olympia, Kalavryta, Corinth, Argos and Dervenakia.

Aegean Airlines is celebrating 200 years of independence, drawing a huge 200 in the sky https://t.co/owXmvmj0Js pic.twitter.com/5mVt3lin9d