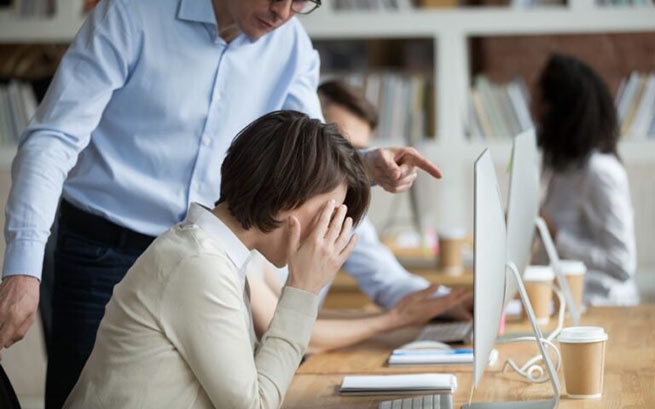 This has happened to almost everyone: most employees have faced a bad boss at least once in their career.

Three-quarters of American workers say they stay at work with a bad employer or boss because they need money, a 2020 ResumeLab study found.

According to Tom Gimbel, workplace culture expert and CEO of employment firm LaSalle Network, there are five types of bad bosses. Gimbel ranked them from most common to least common and gave CNBC tips on how to deal with a bad boss.

Workaholic boss
This boss works very hard and expects you to work at his or her level, even if that’s not realistic. The key to working with him is to openly discuss what he wants you to do – daily, weekly, or monthly – and create a to-do list that you can cross off as you go.

Even if you can’t complete all the tasks in the time he expects, showing him that you’re moving your list forward is “usually enough to put him at ease,” Gimbel explains.

ghost boss
Such a boss is absent, does not monitor the work of his team and is not available when his team needs help.

What does Gimbel advise you to do if you work for such a person? Update your manager regularly on your work and ask questions when you need help. If he or she does not respond, contact another manager or senior member of your team. Keep all documents, emails, and messages that show you asked for their help and let them know. If you subsequently receive criticism for your work, you can use them as proof that you did your best.

Try praising one of his ideas to win him over. If you don’t think the idea is good, ask for clarification after the compliment. Let’s say, for example: “Sounds like a good idea. Can you explain how this would work if this problem occurs?”. Or: “I like the idea. How can we get the resources to carry it out?”

The solution to this situation can be awkward, Gimbel admits: “draw a line between you” and set boundaries. If you’re trapped in a conversation that can’t end, find a way to respectfully say that you need to work.

Boss – Volcano
The Volcano Boss starts out like a Ghost Boss: he doesn’t give any instructions to his team because he’s simply not there to evaluate the work being done. But then he takes it out on his co-workers when something doesn’t live up to his expectations, even if it’s his lack of leadership that’s to blame.

Here, Gimbel recommends using a strategy similar to the one developed for the ghost boss: brief him on your job, communicate by asking questions, and, most importantly, save all those documents that show that you made an effort to ask for help. .

Are you a bad boss?
If you’re a boss, Gimbel advises you to “look at yourself in the mirror” to see if you fall into these categories. If you are concerned, you can consult with your colleagues. Try asking them questions related to each type of bad boss. For example, you can determine if you are a ghost boss by asking employees, “How involved am I in your work? Do you think I’m too involved or not involved enough?”

“The real problem with people who have these bad traits is that they either don’t realize it or they don’t care so they don’t want to fix it,” says Gimbel. “If you’re trying to fix it, then you’re probably on the right track.”