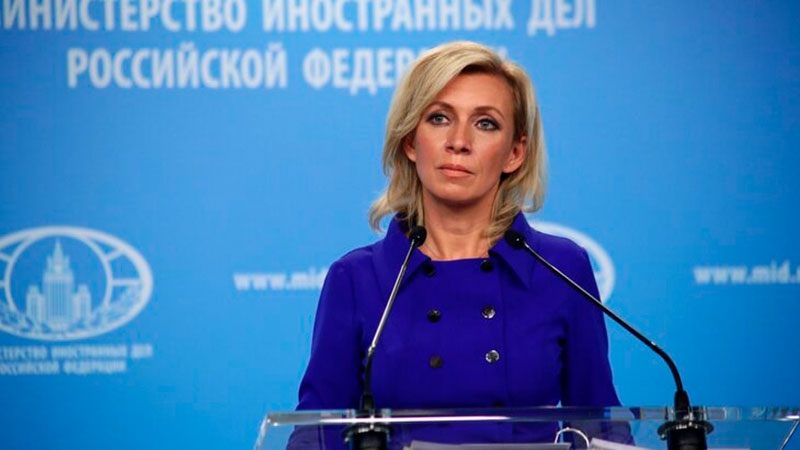 The official representative of the Russian Foreign Ministry, Maria Zakharova, said that the reaction of the “Kyiv regime” to the damage to the Crimean bridge speaks “of its terrorist nature.” On the bridge today, October 8 in the morning, a truck exploded.

“The reaction of the Kyiv regime to the destruction of civilian infrastructure testifies to its terrorist nature,” Ms. Zakharova wrote on her Telgram channel.

Formerly Advisor to the Head of the Office of the President of Ukraine Mykhailo Podolyak wrote on Twitter that the Crimean bridge is only the “beginning”.

Officially, Ukraine did not take responsibility for the emergency.

The Russian spokesman’s statement shows that the Kyiv government will henceforth be treated as terrorists. This means that the Russians now believe that they have the right to exterminate them by any means and means.
For the first time they were called terrorists, which means that they will become the main target of the global counter-terrorism doctrine, which the Americans are primarily implementing.
The strike on the Kerch bridge was not a strike on systems, but a strike on a civilian object using terrorist means, i.e. explosive truck. This is considered a terrorist act, and now Russia has a free hand to strike where it sees fit.
The explosion on the Kerch bridge killed civilians, and it remains to be seen whether the driver, a resident of Krasnodar, was a suicide bomber or someone who unknowingly planted explosives in his truck.
However, the West will have to answer for today’s strike, since the Ukrainians admitted that they delivered it, and the West should be “saddened” by the death of civilians. It is worth noting that in a statement published three days earlier, the United States tried to disassociate itself from the terrorist attack with the murder of Daria Dugina, saying in the publication

” target=”_blank” rel=”noopener noreferrer”>New York Times
,
what
The United States did not contribute
in the implementation of this plan – neither by providing intelligence information, nor by providing any other assistance. According to the authors, in Washington they assure that they did not know about the operation in advance, and if they did, they would strongly oppose it.

According to representatives of the American authorities who spoke with the publication, the United States has already expressed dissatisfaction with Kyiv in connection with the murder of Dugina. As the New York Times writes, the US government is disappointed that Kyiv, as it turned out, does not always consider it necessary to devote Washington to its military plans, especially in covert operations planned on Russian territory.

In turn, Russian Foreign Ministry spokeswoman Maria Zakharova said: “We are well aware that behind such materials in an American newspaper are American official structures that do not want to name themselves for some reason they understand.”

“But in fact, it’s time for Washington to speak loudly, frankly and clearly about its involvement in the situation in Ukraine. For real, from regime change to their motives for destroying gas pipelines,” Zakharova said.