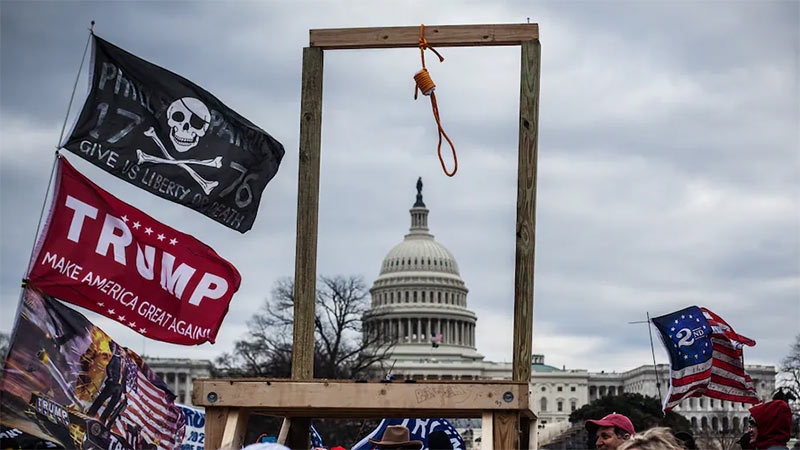 The US is rapidly losing reputation, writes WP. During the Iraq War, the Bush Doctrine was mocked by the whole world, and Americans traveling abroad had to pretend to be Canadians. Now the situation has worsened even more: a world without US hegemony is just around the corner, the author notes.

Hamburg. “What’s happening to you is just terrible,” one Bavarian public figure lamented over a German pilsner. “America has been grinding.”

The main topic of the international conference at the Bucerius Law School in Hamburg, which brought together dozens of young leaders from around the world, is: “Facing new realities: global governance under tension.” And what did I see there, a columnist from the USA? That in the eyes of the rest of the world, the American light has faded. No, the attention of the whole world is still riveted to us, and we remain a great power. But it has become clear that for many at the conference—from Germany to Mongolia, from Ghana to Ukraine—the United States has become a symbol of democratic decadence and disinformation, whose citizens are discontented and in denial of objective reality itself, and whose institutions are increasingly emasculated.

“We don’t want those who lost their jobs due to climate change to end up as Trumpists or anything like that,” a European foreign minister said as he discussed the coming retooling of the economy. Other conference participants looked compassionately in my direction, and pity was read on their faces.

“I was thinking of settling in the USA,” one of the participants, an internationalist from the Ivy League and Oxbridge, now a UN employee, admitted to me. in case of school shootings.

In the past, Coca-Cola, Levi’s jeans and jazz were the top American exports – not to mention ideals such as freedom, civil rights and the rule of law. Now we are better known for the rampant wave of violence and school shootings. However, there are still glimmers of respect for what we once stood for (and sometimes continue to).

Senator Bernie Sanders’ 2016 presidential campaign has been cited over and over again as an example of how the American political system is open to outsiders and surprises. The protests against the death of George Floyd in 2020 and the success of the Black Lives Matter movement have been hailed as rare examples of truly free expression.

A Kenyan conference attendee fondly recalled a year of study in America and a summer internship with a local Republican congressman. He recalled how at first he did not believe that a government official himself went to the homes of voters, without a driver or bodyguard, and answered the phone himself. It turned out that direct democracy, which is a rarity in his homeland, is still possible in America. (Incidentally, the same congressman, Fred Upton of Michigan, was among ten House Republicans who voted to impeach Donald Trump after the Capitol Hill uprising on January 6, 2021. In the spring, Upton announced he was retiring due to redistricting , unable to withstand the competition of the Trumpists in the primary elections).

The US reputation has been deteriorating for at least two decades. During the Iraq War, the Bush Doctrine was mocked by the whole world, and American tourists abroad, in order not to embarrass themselves, pretended to be Canadians. It has since become a cliché.
However, over the past six years, the situation has worsened even more. Our geopolitical rivals have always had enough “cartridges”, but the old difficulties fade in comparison with the new ones. At the very least, it is alarming how many people are buying for duck, as if the 2020 elections were “stolen”, although the rest of the world is well aware of what nonsense this is.

After the 2016 elections, European leaders warned they could no longer rely on the US as a defense and security partner. And just recently, Ohio senator candidate JD Vance made loud statements all over the world: “I’ll be honest with you: the fate of Ukraine does not bother me in the least.” This proved that the United States is not only not serious, but also dodges international obligations in every possible way and refuses moral leadership.

Our country is generally famous for its egocentrism. Only 20% of Americans speak a second language (compared to 65% in the European Union), so it’s no wonder that most Americans don’t care what they think of them in Europe and the rest of the world.

And completely in vain. While the United States is fading away, our competitors – the relentless China and the unpredictable aggressive Russia – are greedily biding their time.

In 2008, Fareed Zakaria wrote: “At the military-political level, we still live in a world with a single superpower. But in all other dimensions – industrial, financial, educational, social, cultural – the balance of power is changing, and American primacy is waning.” In 2022, this assessment of the “post-American world” moved from theory to practice.

It may not be too late to roll back. But if we want to maintain our status, we must act: a good start would be to hold the former president accountable to the rule of law and realize that the next generation of leaders is watching us closely. The world takes our decline seriously. It’s time for us too.